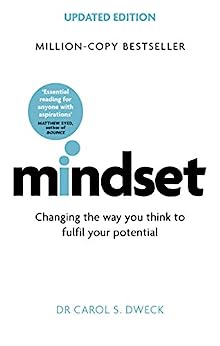 World-renowned Stanford University psychologist Carol Dweck, in decades of research on achievement and success, has discovered a truly groundbreaking idea-the power of our mindset.

Dweck explains why it's not just our abilities and talent that bring us success-but whether we approach them with a fixed or growth mindset. She makes clear why praising intelligence and ability doesn't foster self-esteem and lead to accomplishment, but may actually jeopardize success. With the right mindset, we can motivate our kids and help them to raise their grades, as well as reach our own goals-personal and professional. Dweck reveals what all great parents, teachers, CEOs, and athletes already know: how a simple idea about the brain can create a love of learning and a resilience that is the basis of great accomplishment in every area.

Juancr21
2.0 颗星，最多 5 颗星 Made me feel as turning in circle without taking me somewhere
2020年3月11日 - 已在美国亚马逊上发表
已确认购买
Despite the fact that for me the Mindset is the key for almost everything (that is why I bought the book), I had the impression that once the concept of Mindset was explained, the book focused only on giving examples, some of them a bit exotic, to try to justify why having a good Mindset is important. It was difficult to find the added value of all the chapters as I strongly believe that the author could have had said the same with less words.
The book is not written as a story that can end with a conclusion so it is the same if one read only one chapter instead of the whole book. I never arrived to feel hooked and as soon as I finished it I bought "Extreme Ownership" and with only few pages of the introduction I have already the feeling of emotion and interest that I look in a book.

edsetiadi
5.0 颗星，最多 5 颗星 How a simple concept can be a game changer
2020年5月1日 - 已在美国亚马逊上发表
已确认购买
If I had to assemble 10 books to serve as the manual to create a superhuman, this book would be one of them. I wasn’t aware before that how the simple concept of fixed mindset vs growth mindset could explain a lot about someone’s character and behaviour. And how relatively straight forward it is to change them, for better and for worse. An absolute vital book to read.
阅读更多
24 个人发现此评论有用

Golden Lover
2.0 颗星，最多 5 颗星 Repetitive
2020年10月24日 - 已在美国亚马逊上发表
已确认购买
It sounds like a good premise but the book is repetitive and filled with too many examples. I had hoped for helpful information on HOW to change my mindset, not never-ending examples of people who do or do not have a flexible mindset. It's really a pretty useless book.
阅读更多
15 个人发现此评论有用

Tom Venuto, Author of Burn the Fat, Feed The Muscle
5.0 颗星，最多 5 颗星 Mindset is more important than talent
2022年2月12日 - 已在美国亚马逊上发表
已确认购买
Many books, including Talent is Overrated, Peak, Grit and Outliers have made the argument that hard work, persistence, deliberate practice, opportunity and a nurturing environment are among the reasons why people excel, not talent alone. In Mindset, Stanford psychologist Carol Dweck adds another reason why some people thrive and achieve – they have a growth mindset.

Dweck proposes that human qualities are not carved in stone, they can be cultivated. People can grow and get better at anything, including sports, art, music, business, parenting or relationships. This includes intellectual skills. People can get smarter.

In the fixed mindset, because intelligence and ability are seen as static, this leads to a tendency to avoid challenges, see effort as fruitless, ignore useful feedback, feel threatened by the success of others, give up easily when obstacles arise, and get defensive and place blame for poor performance or failure. As a result, people with this mindset plateau early and achieve less than their full potential.

In the growth mindset, a person sees intelligence and ability as something that can be developed. This leads to a desire to learn, to embrace challenges, persist in the face of obstacles, see effort as the path to mastery and therefore work harder, learn from criticism and find lessons and inspiration in the success of others. As a result, they reach even higher levels of achievement.

Mindset does not argue that success is a matter of either genes or environment, talent or hard work. It acknowledges that there’s a constant interaction between the two. The book also doesn’t propose that anyone can become anything – a Mozart or Einstein or Michael Jordan – if they simply work hard enough and long enough.

However, Dweck does suggest that people are capable of much more than first meets the eye and there’s no way to know a person’s potential or predict what can be accomplished without trying and putting in the time and effort. Some of the most successful people in history had no obvious signs of talent when they started.

The book gives examples of fixed versus growth mindset in school, sports, business, relationships, and parenting so there’s value for coaches, athletes, students, teachers, parents, couples, managers, executives and employees. There’s an entire chapter devoted to business and another to sports, but the largest number of examples are related to education and learning.

I believe the message in Mindset is an important one. I would rate this 5 stars for concept. I give it 4 for delivery. It’s filled with so many anecdotes I felt like it dragged in places and was a bit repetitive. I think this is the kind of subject that could be covered completely in a 20 minute TED talk. But if you’re interested in psychology, especially learning, mindsets, beliefs and the talent vs work or nature vs nurture debate, then you would enjoy reading this whole book cover to cover.
阅读更多
6 个人发现此评论有用

lucaberta
5.0 颗星，最多 5 颗星 A new way to look at the world and our part in it
2019年6月1日 - 已在美国亚马逊上发表
已确认购买
I had seen this book referenced many times in times in the past, and only recently I decided to buy it and read it. And it has been one of the quickest reads ever!

This book is a true gem. It helps the reader undermine the victim mentality to the core, and provides with many examples of the difference that having a fixed mindset has compared to the journey implied in having a growth mindset.

We all are a mix of both mindset, and it is up to us to recognize and control where we are in our life, and what is the dominant mindset. This book gives concrete action steps to take to chip at the fixed mindset, and to install the growth mindset mentality which is what makes us improve in all we do in our lives.

Because age and skills don’t matter when the right mindset, the growth mindset, is allowed to make us flourish.

A must read, truly inspirational. And now it’s time to start the journey. Now.
阅读更多
13 个人发现此评论有用