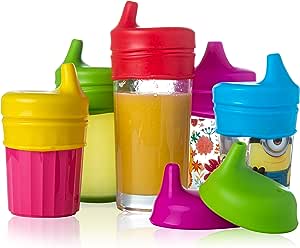 Kelsey Nowell
5.0 颗星，最多 5 颗星 so great with these sippy lids
2017年1月8日 - 已在美国亚马逊上发表
已确认购买
So far, so great with these sippy lids. We've had various sets of plastic sippy cups/lids, but they're often chewed on and usually start to get gross. I got these thinking they'd be handy to have for using with any sort of cup of the right size. So far, we've been predominantly using them with a set of stainless steel cups (got the idea from various other reviewers), and I like the combination. They're easy to clean, and my daughter likes the bright colors. Also the variety of colors makes it nice for being able to keep drinks straight (blue is water, red is juice, green is milk, etc).

We haven't had any problems with spilling with these lids, which is another great plus. My daughter has gotten better about not throwing her cups around, but she does occasionally leave them on their side or whatever, and we haven't had spills. The only issue is that I caught her trying to stick her finger through the venting hole the other day, which was stretching it out and could potentially cause leakage in the future (not sure that's a flaw of the lids or just a general toddler issue).

The only slight downside so far is the somewhat daunting task of stretching them over a cup of liquid since it takes two hands to stretch them out and leaves no hands for holding the cup in place. So far, I've only had one spill and it was minor. Just takes a little practice to get the right technique.

I'd recommend these to parents of toddlers, especially those that like to chew on lids or leave their cups on their side. I'd also recommend them as an easily cleanable alternative to plastic lids.

Jesus Garcia
5.0 颗星，最多 5 颗星 No leak amazing lid
2017年4月17日 - 已在美国亚马逊上发表
已确认购买
Love that it doesn't leak it's my main problem with other sippy cups and with this lid I just got it, it works perfect just what I was looking for , for my toddler to take his nap with his sippy cup !
The only thing that I got to struggle is to put it on the cup i had to stretch this lid alittle hard but other than that everything is working just how I wanted maybe because the lid is new it's hard at first to get used to this lid to assembly every time my toddlers ask me for more milk but it's alright hope it gets easier by time and no leak is what I was looking for

I definitely recommend this lid
My 2 yr old and 1 yr old are doing just perfect with their lids
Love it!!!!!

Ab
4.0 颗星，最多 5 颗星 Would buy again
2016年12月4日 - 已在美国亚马逊上发表
已确认购买
I bought these to fit sippy cups that lost their lids. They fit and work well. The only issue I had is that the kids like them and bite the top and end up pulling the lid off. It's their wild drinking skills that get the lid off. So I have to say, I love the lids, I just need to teach the kids not to drink so aggressively:)
阅读更多
5 个人发现此评论有用

Kara Shovlin
5.0 颗星，最多 5 颗星 Great product and stellar customer service
2016年11月22日 - 已在美国亚马逊上发表
已确认购买
These are just what we were hoping for! They fit perfectly over a jelly jar or a Mason jar. I love keeping 2 in my purse in case we end up somewhere without sippie cups (grandparents house, etc). I saw some reviews of some similar lids, about people finding it difficult to drink from, but my children (ages 8 months, 3 yrs and 5 yrs) have no trouble. We haven't had a spill and they can drink easily. I would definitely recommend these! Great price and excellent customer service too!
阅读更多
4 个人发现此评论有用