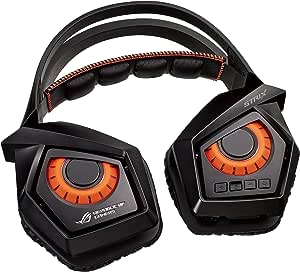 Rudy Gruse
1.0 颗星，最多 5 颗星 Wearing the headset is not covered under warranty. And wire frays killing audio.
2018年11月6日 - 已在美国亚马逊上发表
已确认购买
So, the other day i was putting on this headset. After about a minute or two listening to music the left ear cup snapped. I was kinda surprised to see that one of the most crucial hinges was made purely of plastic. This snapped after 10 months. Now some may be wondering how wearing a headset would snap the hinge. I would refer you to the 1 star for comfort. This headset grips like a vice grip. There is no adjustment and the headset bends back to a small shape causing it to always place major pressure on the headset users head. I usually find myself with major headaches after using this for extended times.

When i talked to Asus they apparently, didn't want me to talk about the process of trying to get this repaired or my communications with them. I can say however, that this headset was covered under warranty and asus will not repair it. Even though its within one year of purchase. As well as, a laptop my brother has from asus had a similar issue. Except for his the inner screw connection the panel of the laptop screen to the back of the screen sheered right off. This is due to asus continued use of plastic in critical components of their electronics. And I am extremely surprised that they are unwilling to preform repair on devices that are extremely expensive and in warranty. (the laptop was a One month off warranty.)
Also to give a frame of reference for my care for products. I still have a properly overclocked gtx 295 from around 2009 working fine almost a decade now. I have a newer laptop but that old beast was my daily driver for the better part of a decade. And I'm just surprised that 15$ headphones lasted longer then a 300$ headset. Don't think ill ever buy asus again if wearing a headset wont be covered by them.

Update, i super glued the headset back together. It looks terrible on that ear cup but at least its passable until. 1 Year and 2 months after i got it, the wire inside the cable has frayed currently if the wire gets jostled any amount the left ear cups audio goes out sporadically coming back. Asus support reps are not to blame in my opinion. But Asus as a complete company. When a buyer buys a product they expect for it to last a decent while not a couple weeks after the warranty fails.

Christopher
5.0 颗星，最多 5 颗星 These headphones are a major go compared to the competition...
2018年1月11日 - 已在美国亚马逊上发表
耳机款式: 无线大小: 7.1 Surround已确认购买
For the price point and for the sound quality, I have to recommend these unmatched. I bought the steelseries arctis 7 based on the reviews here on amazon, and wow those were aweful. The sound quality is similar to someone next to you on the train playing their cell phone as a speaker. Seriously! Even after downloading their software and later the peace equalizer, they only sounded ok. Also, the volume only got moderately loud. On each ear, there are volume adjustments that will automatically adjust themselves on anything with a hood or collar. This is SO ANNOYING. And why is there two? Put the volume in one easily accessed place please. Thanks. Lastly, they were terribly uncomfortable. I have a larger head, but it's not huge, and they were just totally uncomfortable. The pads are very cheap and barely cover the ear.

So, on to the ASUS, these headphones honestly look a little goofy, but the sound quality!!! The base is deep for this price point. I don't like a ton of base, but I like it when it's part of the experience. The highs are very clear and even as high as my computer will go, they never distort or sound starved for power. The comfort is a solid 9, they are made of plastic which is a little disappointing, but I didn't find them to make any annoying squeaks or press on my head too firm. The mic is very good, the range and power are excellent. I mean these really just blew me away. I don't understand why they have a so/so review rating here on amazon, I would recommend these over any of the other wireless options.
阅读更多
13 个人发现此评论有用

Tim Jenson
2.0 颗星，最多 5 颗星 Big Sound Drivers Don't Matter
2019年6月6日 - 已在美国亚马逊上发表
耳机款式: 无线大小: 7.1 Surround已确认购买
I don’t always bother with reviews, but felt I had to speak to somebody like myself who may be considering this headset. What appealed to me so much about this headset was that it had 60mm drivers, for those who don’t know that is the size of the speaker itself. That is bigger than any other wireless headphones I could find. I also found on a site called that compares headset in this format A versus B where you enter the headphones, and it comes to the pluses and the minus of why a headset is better, they found this to be the best for its price. I checked all the other headsets, and I was looking for the best sound I wasn’t worried as much about the form factor or the build. I felt comfort was subjective because whatever headphones I looked at I found people who were complaining and saying they fit like a dream. Same goes for the sound. It was frustrating to rely on the reviews because they were so subjective. So, I was focusing on technical aspects. All the review sites seemed to have vague terms like good sounding nothing to differentiate one headset from the other. I have some terrible news these headphones sucked, in my opinion.
I wish I could give you more technical details but couldn’t find any. So, what I’m about to say is my own opinion. The headset didn’t fit my head; I have a big head. The sound SUCKED, it was bass heavy, and all the frequencies seemed mushy and overpowered by the bass. I had to turn it up to turn the volume up to 100 to make it even a little bit loud. I play a lot of PUBG, and I’m listening for little sounds like footsteps. A lot of people think surround sound is a gimmick I don’t. It’s all in how it’s implemented, it’s true there isn’t true surround sound, all surround sound done by two speakers uses algorithms that trick the brain, but some work better than others. The surround sound on these headphones sucks mainly because the sound sucks, but even if the sound was good, I was unimpressed by the surround sound, my sound card does a better job at surround sound. Yes, I also have a great wired set of headphones. This is the second pair of wireless headphones I’ve bought so far. I should preface that I am coming from a high-end set of wired headphones, as far as good sound goes, I probably have unrealistic expectations for sound quality when it comes to these kinds of wireless headsets. Before these, I had the Logitech G533 which are A LOT better sounding than these but didn’t satisfy me because of my high expectations. I will be trying the SteelSeries Arctis 7 (2019 Edition) next and will update this review.
阅读更多
4 个人发现此评论有用
加入亚马逊Prime，从此免运费
亚马逊Prime会员可享海外购美/英/日/德跨境免邮，全年无限次！更有免费无限次阅读电子书服务
> 立即加入
了解我们
合作信息
支付方式
帮助中心和购物指南