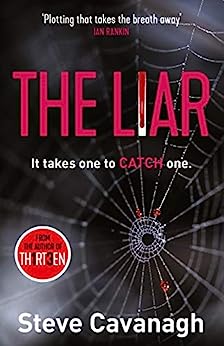 The Liar: It takes one to catch one. (Eddie Flynn) (English Edition) Kindle电子书 Plotting that takes the breath away (Ian Rankin)

The Plea reads like an idiosyncratic cross between Elmore Leonard and John Grisham, but bursts with its own individual flavour. (Financial Times)

Steve Cavanagh was born and raised in Belfast before leaving for Dublin at the age of eighteen to study Law. He currently practices civil rights law and has been involved in several high profile cases; in 2010 he represented a factory worker who suffered racial abuse in the workplace and won the largest award of damages for race discrimination in Northern Ireland legal history. He holds a certificate in Advanced Advocacy and lectures on various legal subjects (but really he just likes to tell jokes). He is married with two young children.

Joanna J
5.0 颗星，最多 5 颗星 Book 3 in the Eddie Flynn series is the best yet
2019年7月28日 - 已在美国亚马逊上发表
已确认购买
The Liar is the third book in the Eddie Flynn series, which has rapidly become one of my favourites, due to the combination of a highly likeable, smart but fallible hero, with highly complicated but deeply satisfying adrenaline-fuelled plots. Each mystery stands alone, but I recommend reading the series in order, including the prequel novella. I only started these because I received an ARC of the next one, Thirteen, from NetGalley, but I am so glad I invested in the earlier books.

Con-man turned Defence lawyer Eddie is contacted by a figure from his past that he can’t say no to. Lennie Howell made a fortune running a hostage recovery business, but when his own teenage daughter is kidnapped, he’s willing to break all the rules to get her back, and wants Eddie to defend him for it, but when the money drop goes wrong, Lennie finds himself accused of her murder. Meanwhile Eddie’s mentor Harry’s career is at risk from a predatory lawyer who has reopened the case of a young drug addict whose baby died in a fire, and plans to blame Harry for her conviction.

I reckon this is the best of the series so far, as there are so many interweaving storylines that even though I figured out part of the mystery quite early on, I had no idea how it all tied together, and was completely gripped until the end. There are a variety of antagonists from the start, as well as some sympathetic support characters, and lots of surprises. While these are books about a lawyer, and there are courtroom scenes, these are much more exciting than your typical legal thriller, and way surpass any John Grishams I’ve ever read.
阅读更多
6 个人发现此评论有用

Katherine M.
5.0 颗星，最多 5 颗星 Another great Eddie Flynn book but start with the first one if you are new to this series.
2019年8月14日 - 已在美国亚马逊上发表
已确认购买
I recently discovered this series and promptly read them all because it’s that good! Make sure you start with the first book in the series The Defense because the author likes to bring back secondary characters for fun cameos. This book should be the third in the series. For some reason it’s not available here in the states so I had to order from the U.K. This book deals with a man accused of kidnapping and murdering his daughter. Like the rest of the series this book is an engaging court room novel with lots of outside action as Eddie tries to save his client. This novel introduces a couple of characters that will get lots of page time in the next book in the series Thirteen, which is an amazing read, so it’s worth reading this one first. This book has a lot of twists to it which makes for a great read and even though I saw them coming I still really enjoyed it. I am hooked on Eddie Flynn and really enjoying this series so makes sure you start with the first book before starting this series.
阅读更多
5 个人发现此评论有用

mrswoody
4.0 颗星，最多 5 颗星 Love this series!
2018年9月20日 - 已在美国亚马逊上发表
已确认购买
I love this series, just wish they were all available on Kindle. I had to buy the paperbacks and after being a kindle convert for many years a physical book is very clunky to hold and read, especially at night in bed.
阅读更多
8 个人发现此评论有用

Kindle Customer
5.0 颗星，最多 5 颗星 Excellent
2018年11月24日 - 已在美国亚马逊上发表
已确认购买
I have read all of the Eddie Flynn books, what an excellent read . No holds barred as Flynn uses some deceitful tactics to get to the truth. I hope there are more Flynn novels in the pipeline.
阅读更多
3 个人发现此评论有用

Loony
5.0 颗星，最多 5 颗星 The Liar
2018年11月12日 - 已在美国亚马逊上发表
已确认购买
The Liar like the previous novels of Steve Cavanagh keeps the reader on the edge of his/her seat until the last word has been written.
The novel is filled with suspense and intrigue and I would definitely recommend it.
阅读更多
3 个人发现此评论有用
加入亚马逊Prime，从此免运费
亚马逊Prime会员可享海外购美/英/日/德跨境免邮，全年无限次！更有免费无限次阅读电子书服务
> 立即加入
了解我们
合作信息
帮助中心和购物指南