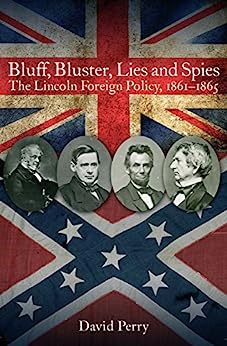 In the early years of the Civil War, Southern arms won spectacular victories on the battlefield. But cooler heads in the Confederacy recognized the demographic and industrial weight pitted against them, and they counted on British intervention to even the scales and deny the United States victory. Fearful that Great Britain would recognize the Confederacy and provide the help that might have defeated the Union, the Lincoln administration was careful not to upset the greatest naval power on earth.

Bluff, Bluster, Lies and Spies takes history buffs into the mismanaged State Department of William Henry Seward in Washington, DC, and details the more skillful work of Lords Palmerston, Russell, and Lyons in the British Foreign Office. It explains how Great Britain’s safety and continued existence as an empire depended on maintaining an influence on American foreign policy and how the growth of the Union navy—particularly its new ironclad ships—rendered her a paper tiger who relied on deceit and bravado to preserve the illusion of international strength.

Britain had its own continental rivals—including France—and the question of whether a truncated United States was most advantageous to British interests was a vital question. Ultimately, Prime Minister Palmerston decided that Great Britain would be no match for a Union armada that could have seized British possessions throughout the Western Hemisphere, including Canada, and he frustrated any ambitions to break Lincoln’s blockade of the Confederacy.

Revealing a Europe full of spies and arms dealers who struggled to buy guns and of detectives and publicists who attempted to influence opinion on the continent about the validity of the Union or Confederate causes, David Perry describes how the Civil War in the New World was determined by Southern battlefield prowess, as the powers of the Old World declined to intervene in the American conflict.

Thomas Phillips has been a professor of American History at the University of New Haven (now retired). In addition to several publications in Civil War journals and magazines, he was selected by National Public Radio in 2009 to do an interview on Abraham Lincoln in honor of the 200th anniversary of the President's birth. This was followed up in 2010 by a national broadcast from New York comparing the State Department work of William Henry Seward with that of Hillary Rodham Clinton. He has also shared mutual assistance with Pulitzer Prize winner David Herbert Donald, whose Lincoln biography has become a standard. --此文字指其他 kindle_edition 版本。

Kindle Customer
5.0 颗星，最多 5 颗星 Detailed scholarly work for the serious student of Civil War history.
2019年8月8日 - 已在美国亚马逊上发表
已确认购买
The author provides great depth. This is not for the casual reader who is looking for a good story to entertain them.
阅读更多

Kindle Customer
1.0 颗星，最多 5 颗星 Magicly bad writing
2017年9月25日 - 已在美国亚马逊上发表
已确认购买
Badly written to the point of unreadability. Repetitive and very poorly organized, the author constantly changes topic mid paragraph and can barely construct a sentence, much less a book. Footnotes are either redundant or site secondary sources.
I had to stop reading when he began a sentence with "Both " and went on to refer to three actors. The subject matter would be interesting in the hands of a writer but this confused mess is not worth sifting through. Avoid it.

brumba
3.0 颗星，最多 5 颗星 Lincoln 's foreign policy
2017年5月31日 - 已在美国亚马逊上发表
已确认购买
This treatise is an academic review of foreign policy during Lincoln's period. While very interesting it does not read like a novel. The success of all of the major characters is reviewed and historical sources critiqued.
阅读更多

Andy in Washington
3.0 颗星，最多 5 颗星 Somewhat disappointing
2016年11月1日 - 已在美国亚马逊上发表
The diplomacy of the civil war is an overlooked period of history. Most history books barely mention the subject, mentioning that there were efforts to keep Britain and France out of (or in, depending on what side) the war, but not much else. Kudos to David Perry for examining ad attempting to shine some light on this aspect of the Civil War.

* No one would ever accuse Perry of not knowing his subject matter. He has evidently conducted a great deal of research on the diplomacy of the era, both on the side of the Union and the Confederates, and has some excellent insights into the motivations, personalities and ambitions of the major players. Probably the most examined character is Secretary of State William Seward, and a good portion of the book centers around him. But there is excellent information on most of the other major characters on both sides, as well as European diplomats.

* Perry is honest about the level of “truth” in his analysis. There are precious few “official” journals of government actions during the war, especially on the Confederate side. Historians are forced to rely on the accounts of other players, many of whom have their own axes to grind. Still, the author seems to have done a reasonable job of teasing out the truth…or at least as good an approximation of it as possible.

* The book has several points in it that should have been obvious, but which I had never though before. For example, there was never an organized foreign policy or strategy among the CSA, simply because the central government was so weak. By definition, Jefferson Davis and his advisors had about as much authority to make treaties and conduct foreign negotiations as any of the CSA member states. Thus, while Seward and the Union could play “power-politics” with Britain, France and Russia, the CSA was never really in the game.

* This book was very frustrating to read. The text was loaded with good information, analysis and insights, but the book desperately needed a good editing. The grammar and writing style were fine, but there was not a lot of organization. Topics could shift by paragraph, information and language were repeated countless times, and the text never really headed in one direction long enough to make a convincing point.

* Obviously, Perry expects the reader to do a bit of his own work in sorting through the information and teasing out the truth. Unfortunately, the book is not complete enough to really do that (and it would probably take 3000 pages). As a trivial example, the book lists the number of dispatches received by Seward from various European capitals during 1863. There were 1000 dispatches from London, and 1240 from Paris. But I had no idea what to do with that number. Are three dispatches a day a big number in 1863?

=== Summary ===
If you are a real civil-war history buff, there is enough information in this book to keep you interested. It is the sort of book that you should read, then throw a few logs on the fire and ponder for a couple hours. However, if you are more of a casual history fan, I believe that the disorganized nature of the text will overpower your determination to slog through the book.

James W. Durney
4.0 颗星，最多 5 颗星 One war at a time?
2016年6月20日 - 已在美国亚马逊上发表
History’s focus during war is on battles and leaders with domestic politics being a distant second.
During the Civil War, with few exceptions, international politics is not considered.
However, international politics occupied much of the Lincoln administration’s time causing more than a few sleepless nights.
In 1860, America is an emerging nation, slowly building a manufacturing economy but dependent on exporting raw materials.
Militarily, America’s small army and navy is not something established nations worry about.
Great Britain is the world power. The largest manufacturing economy in existence back by an empire that spans the globe, a small well trained army and a huge navy enforce the Queen’s will.
France, dreams of Napoleon but lives in England’s shadow.
Russia, Prussia have internal problems but are powerful nations.
This is a colonial world, ruled from Europe and populated with monarchs, some with real power.
America is the new kid, somewhat pushy with ideas many older kids don’t like.
The Civil War presents Europe with some intriguing choices.
For Great Britain, having two or more nations in America could be a good thing, more so if one is a semi-dependent client state.
France dreams of an empire and seizes a chance establish one in Mexico.
All of Europe sells war materials to both sides as quickly as possible.

This book looks at how international politics play out during the Civil War as a combination of bluff, bluster, lies and spies.
The author takes the time to establish the world as it was because this causes major considerations for all parties.
From this foundation, we follow the story year by year, to the extent possible.
There are many sideshows some important enough to linger over and these need to be ended prior to moving on.
Seward and Lincoln dominate American policy, while Davis and Benjamin shift with the times, trying to establish a recognized government.
Charles Adams is an unrecognized hero for his work in London, well detailed in the book.

The writing is crisp, the personalities explained and the agendas understandable giving the reader an excellent understandable look at the subject.
This is a history with endnotes, glossary, bibliography, appendices and index.
阅读更多
11 个人发现此评论有用