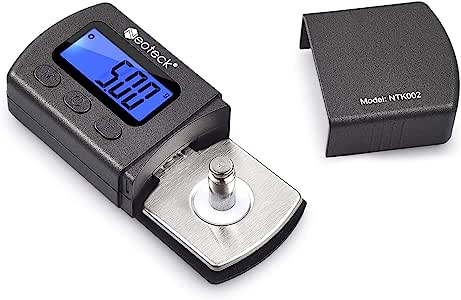 All Neoteck Product Comes With 18 Months US Base Warranty

John F. Baker
5.0 颗星，最多 5 颗星 Good product, caring seller
2016年12月29日 - 已在美国亚马逊上发表
颜色: 黑色已确认购买
The scale is easy to use. Turn it on, let it automatically set its tare weight to zero, then carefully lower the stylus onto the scale to measure downward force. It's just that easy. The scale seems to be accurate to within .02 grams (see picture), and I am now confident my turntables are now tracking correctly, esp. my new/used Technics table, which has an older Stanton cartridge that was originally set too heavy, DJ style.

I noticed evidence that the seller cares about customer satisfaction. The scale came with two uncoated batteries packaged in separate baggies to prevent discharge (as opposed to coated batteries - something complained about in previous reviews when the coating interfered with the batteries' function); this means the seller became aware of the problem and made an adjustment. And the seller emailed me on the day of delivery to check in with me; this means the seller followed the shipment closely, noted delivery date and time, and cared enough about my response to pro-actively open a line of communication with me. I am impressed by this.

My only complaint is a small one: that the scale does not return to zero when I remove the stylus. It settles in at a reading of .4 grams when I remove the stylus. So if I want to remeasure the tracking force, I have to turn the scale off and on again to get it back to zero. But that is a minor complaint and is completely outweighed by the confidence I feel that my styli are now tracking with the correct force.

I recommend this product and this seller.

Richard
5.0 颗星，最多 5 颗星 Installed the included batteries, worked right out of the box.
2018年3月16日 - 已在美国亚马逊上发表
颜色: 黑色已确认购买
Worked right out of the box, no need to calibrate. The box had 3 button batteries, only need 2, and 5g calibration weight. I put the batteries in turned it on, placed the included 5g weight on the scale target, the scale read exactly 5g. Placed the unit on the platter of my Pioneer PL-514, lowered the stylus onto the target. After checking by this stylus force scale it showed my tracking force was too heavy. This scale made me aware that my tonearm counter weight was in error. After adjusting the counter weight to the proper 1.25g stylus pressure with this scale, my records never sounded this good. It is proof the correct stylus tracking force makes a big difference in the sound of my records. Before I was always going by the counter weight ring. This tool will be great when using different head shell cartridge combinations, and adjusting to the correct stylus force for each combination.
阅读更多
20 个人发现此评论有用

Doug Bowker
5.0 颗星，最多 5 颗星 What Every Turntable Owner Needs
2018年2月5日 - 已在美国亚马逊上发表
颜色: 银色已确认购买
Simple to use, nicely packaged and is a huge step up from the manual "balance beam" style stylus force gauges. Setup is simple, and I made sure to use the calibration weight before I measured my cartridge. Instructions could be a little more thorough, but they are enough to get things done. It worked perfectly and really helped me dial in the proper tracking force, which sounds better and is safer for your records.

The cost is extremely reasonable (finally!) considering how many years that digital gauges like this one have often run hundreds of dollars. You won't use this all that much in that you probably won't be changing out cartridges very often, but it's essential for when you do. I usually double check mine one a year anyway because over time the compliance of the cantilever (needle assembly) can change, and thus your tracking force will need adjusting.

A bonus is that they give you an extra battery- though I can't see them running down for about 3-5 years anyway.

Carl C. Ferre-lang
4.0 颗星，最多 5 颗星 Scale itself works fine, good value for money. Excellent customer care.
2017年4月3日 - 已在美国亚马逊上发表
颜色: 黑色已确认购买
I'm updating my original review, in light of new information. I originally used an old digital scale which was not as precise as this one (to the tenth of a gram) to adjust my tracking pressure... I'd gotten a lot of conflicting readings between the two scales, but it's come to my attention that my other scale is miscalibrated in such a way as to have been giving me faulty readings (between 3-4 tenths of a gram too light) for years, causing my vtf to be set a bit too high.. Sounded good, but noticeable issues with cantilever bend, compliance issues on warped records etc... So I've decided to trust this scale. The scale itself seems to be well built and measures with precision to the hundredth of a gram. It is also accurate to within a few hundredths as well, given various test objects. This is great, particularly for the money. I am docking one star, as the measuring area in which you'd put the stylus is not exactly straight. The height of the metal measuring tab differs from 4mm to 6 from one side to the other. I may have gotten a defective one. In fact, and this speaks to their customer service as a group, Neoteck reached out to me after having posted my last review to ask if there was anything they could do to fix the problem. At the time, I was convinced I would just continue use my other scale and i was only out 12 bucks or so so I didn't respond, but I appreciate that they were willing to swap items even offering a refund. That sort of forthright customer care is rare these days. In practice, the uneven measuring tab is only slightly worrying though, as the dead center appears to be exactly 5mm (so that I remove my mat and measure the stylus and it's right about where it would be for general playback. Also, it doesn't seem to affect the measurement wherever on the tab you drop the weight. The results are the same, the only concern for me is getting an appropriate height from my platter. Overall, money well spent. If you need an inexpensive vtf scale, doo business with these guys, you won't regret it.
阅读更多
15 个人发现此评论有用
加入亚马逊Prime，从此免运费
亚马逊Prime会员可享海外购美/英/日/德跨境免邮，全年无限次！更有免费无限次阅读电子书服务
> 立即加入
了解我们
合作信息
帮助中心和购物指南