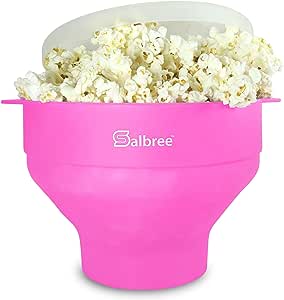 Lowne
5.0 颗星，最多 5 颗星 No way this will work!
2017年12月12日 - 已在美国亚马逊上发表
颜色: 绿色已确认购买
I've tried microwave popcorn bowls before and was not impressed by them so when a friend recommended this item to me I was certain that this would be another waste of money. His recommendation was in response to my complaint of "I just want to eat some good popcorn that's easy to fix and doesn't have all the chemical junk in it like the microwave bags have!" and he assured me that this would fit the task.

So, I bought it. Wasn't very expensive, why not give it a try? It arrived and I put it beside the sink to wash the next day. A week later, there it sat. Two weeks go by, still it sat there. I didn't want to try it. I knew I would be ticked off at another worthless item that over promised and under delivered. How hard can it be to microwave popcorn with little to no scorching, high kernel pop rate and ease of use?

As I drew closer to a month of this thing sitting by my Kitchen sink I think, "Wasted money or not, it's sure as heck being wasted right now!" so I washed it and the lid dried them well and looked up the directions .pdf from the multiple emails sent to me by the company, followed them to the letter and...what do ya know? Tasty popcorn that was easy to make, didn't scorch, the container didn't burn like kissing a tailpipe.

I tried another batch and used some spices. Scorched! Ok, lesson learned. Add things like that after it's cooked (I'm not terribly bright).

This is a wonderful product. Follow the directions and you should be happily munching away on popcorn any time you wish. It folds up nicely for storage, fits in the smallest microwaves (mine is the smallest sold by a national retailer) and the best part...NO HULLS STUCK IN MY TEETH! Seriously, I can't remember the last time I ate popcorn and didn't have to spend 3 days picking hulls out of my gums and teeth.

If you a popcorn fan and don't like the idea of all the chemicals they put in the microwave bags and don't want to buy another small appliance to put on your counter just so you can have good popcorn...buy this thing. You'll be pleased I'm certain!

Steel
5.0 颗星，最多 5 颗星 Works Great and Makes Great Popcorn!
2019年4月4日 - 已在美国亚马逊上发表
颜色: 蓝色已确认购买
This product works perfect, as described. For the people that did not get it to work, they are obviously not following the directions. If you fill it to the appropriate line - for me it was ¼ cup, set your microwave to about 2-2.5 minutes, stay with the popper until the popping slows, and avoid putting anything in the popper other than popcorn, it will work 100% of the time.

For the people that it did not work for, they are undoubtedly not following one of those steps. I add a little olive oil and Himalayan Pink Salt afterwards for a delightful treat. Gourmet or organic popcorn works better for me - from a taste and texture perspective.

C. Davis
5.0 颗星，最多 5 颗星 Works great, dishwasher safe, and doesn't take up much space!!!
2017年12月5日 - 已在美国亚马逊上发表
颜色: 蓝绿色已确认购买
Many years ago, I was an assistant manager at a movie theater and I used to enjoy making the popcorn right as guests were coming in for shows. Now, each year around Christmas time, I start seeing a bunch of kettle poppers as gift ideas and I get the urge to buy one for myself. Then, reality sets in and I remember how much of a pain it was to clean those things AND I don't really have anywhere to store it. Same for the air popper... I already have a bunch of small kitchen appliances, which I rarely use, taking up all my cabinet space. So, this year, when a relative mentioned she used her air popper all the time, but it recently died, I started looking around for a replacement. When I saw these collapsible microwave poppers, I thought it was a great idea and I decided to give it a try. At the movie theater, we used peanut oil, flavacol seasoning, and high quality popcorn kernels. So, I ordered all of those items and put about 2 tsp peanut oil in the bottom of the bowl, poured about 1/3 cup of kernels, and about 1/2 tsp of the flavacol. Put the lid on and set the microwave for 3 minutes. I was a little worried about using the oil because I didn't want to scorch the bottom of the bowl, but it turned out great. I stayed in the kitchen and as soon as the popping slowed down to just a few seconds between each pop, I turned the microwave off. The bowl is advertised as both a popper and a serving bowl, but if you plan to use it for serving you will need to wait awhile before trying to hold it because the bottom of the bowl stays hot. I ended up using a towel to hold it while we were watching TV instead of pulling out another bowl to dump it in. The popcorn turned out great, there were not that many unpopped kernels in the bottom of the bowl, and when we were done, I just put it on the top shelf of the dishwasher! (Much easier than trying to scrub out one of those kettle units)
阅读更多
429 个人发现此评论有用

Bocaboy
5.0 颗星，最多 5 颗星 The Salbree is well worth the investment if you love having popcorn!
2018年7月28日 - 已在美国亚马逊上发表
颜色: 黄色已确认购买
This is a must-have accessory for anyone who loves popcorn. The investment is minor and the utility of making great popcorn is unmatched.

My recipe for perfect popcorn is 2 tablespoons of grape seed oil, a dab of unsalted butter, and 1/2 cup of Pop Secret popcorn. When it's done, a little popcorn salt makes this the best tasting popcorn ever!

I set my microwave to 4:30 and I get a perfect bowl of popcorn with only a few un-popped kernels. Please note that I have an older Kitchen Aide microwave that probably has 10-15% less power than a new one, so through experiment I found that 4:30 works for me. You'll need to test your own microwave for the perfect time. Whatever you do, don't use the popcorn setting on your unit.

The biggest motivator for me was to avoid hydrolyzed vegetable oil, used in almost all microwave popcorn, including Pop Secret and Orville Redenbacher. That oil is the worst for your health. When you use the Salbree, you control the oil you use and how much. I experimented and found that if you use fresh popcorn, you can use the Salbree with no oil at all, although to my palate it tastes too dry. I've experimented with olive oil (leaves a faint taste of the oil) and peanut oil (nice mouth texture) but finally arrived at grape seed oil. It has no taste and a high heating point to avoid burning.