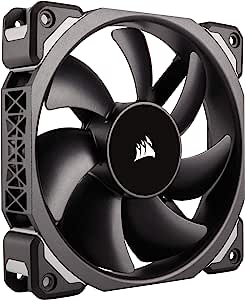 Kim
5.0 颗星，最多 5 颗星 A quiet performer
2017年6月4日 - 已在美国亚马逊上发表
样式: ML120 Pro已确认购买
Update: 2-ish years now and these fans are still going strong after running roughly 10 hours a day and being cleaned every...8 months...maybe. While I've had other fans start getting noisy, these ML120 pros are still quietly doing their job. Since my last review I've slowly replaced all but two (odd sized) of my fans with ML120's because when I put these in, I stop having fan issues. No more weird speed cycling, no grinding, no blade wobbles driving me insane. There may be higher CFM/quieter fans out there, but I've never had fans that worked so well last this long.

This fan is fantastic. I've had the orange NXZT's, Noctua's, some cooler master junk, the bequiet! and gentle typhoon fans. These ML120 Pros are awesome and have quickly become my favorite fans.

Set up 2 for push on my radiator, these outperformed 2 pairs of Noctuas in push/pull. These are louder and outperforming is no surprise given the higher RPM, but these even do a better job at around 1200rpm, and are just as quiet (at that speed - they start to get loud at about 1600rpm with the fans being about 2ft behind me).

I was hesitant because the SP120's were total garbage, but these were an improvement in every way. If I needed to replace my other fans, I wouldn't hesitate to get more of these fans. I'll update if I run into any issues later on.

Chris C.
2.0 颗星，最多 5 颗星 Slightly oversized and will NOT fit strict 120mm areas. Read review.
2018年5月9日 - 已在美国亚马逊上发表
样式: ML120 Pro已确认购买
Bought 5 of these to redo the cooling in my case/on my radiator. The mounting holes are accurate for 120mm, but because the actual fan chassis is 1-2mm oversized from a "normal" 120mm fan, they will not fit in areas that require the normal size (like radiators or smaller cases). I'm not sure why Corsair did this, as the extra size doesn't serve a purpose and limits application. Either way, this should be noted in the description.
阅读更多
15 个人发现此评论有用

busymedstudent
5.0 颗星，最多 5 颗星 Quiet under normal conditions but get loud when ramping up which is fine
2020年1月28日 - 已在美国亚马逊上发表
样式: ML120 Pro已确认购买
I have 10 of these in my case plus 3 more fans that came with my AIO. I usually set my fan profile in the BIOS to quiet or standard so these fans don't make any noise during normal everyday tasks. However every now and then I'll hear them ramp up for a few seconds as I do more like load more apps or play games. They can get loud as they get faster but that's to be expected because of how much air they're pushing. I like how the all-black color is very understated and stealth.
阅读更多
4 个人发现此评论有用

Tony Stark
3.0 颗星，最多 5 颗星 Pushes Air But Its Loud
2018年9月6日 - 已在美国亚马逊上发表
样式: ML120 Pro已确认购买
I used these to replace Scythe fans in a computer that was air cooled. The computer wasn't a serious gaming computer, but instead - it was using active cooling and was very quiet. Until I installed these. My current motherboard only has one 4 pin header - so only one fan can be controlled. Just a warning. The older Scythe fans are known to be some of the quietest out there - these Corsairs are a wake up call. They push a lot more air, but I can hear my computer now.
阅读更多
6 个人发现此评论有用
加入亚马逊Prime，从此免运费
亚马逊Prime会员可享海外购美/英/日/德跨境免邮，全年无限次！更有免费无限次阅读电子书服务
> 立即加入
了解我们
合作信息
帮助中心和购物指南