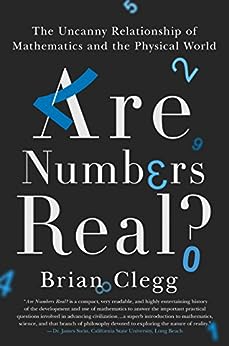 Are Numbers Real?: The Uncanny Relationship of Mathematics and the Physical World (English Edition) Kindle电子书

Have you ever wondered what humans did before numbers existed? How they organized their lives, traded goods, or kept track of their treasures? What would your life be like without them?

Numbers began as simple representations of everyday things, but mathematics rapidly took on a life of its own, occupying a parallel virtual world. In Are Numbers Real?, Brian Clegg explores the way that math has become more and more detached from reality, and yet despite this is driving the development of modern physics. From devising a new counting system based on goats, through the weird and wonderful mathematics of imaginary numbers and infinity, to the debate over whether mathematics has too much influence on the direction of science, this fascinating and accessible book opens the reader’s eyes to the hidden reality of the strange yet familiar entities that are numbers.

Praise for the author Writers who understand science but, at least as importantly, are gifted communicators. George Musser, and Brian Clegg, on this side of the pond, are two that spring to mind. - Literary Review He still manages to surprise me with something new on every page. - Mail on Sunday Clegg's enthusiasm is catching, his science immaculate. - The Good Book Guide In ARE NUMBERS REAL? Clegg tackles a very deep question in his usual way; with clarity, wit and a wonderfully clear narrative writing style. For me, numbers are like natural language: they obviously don't exist in a physical sense - you cannot trip over the number '2' in the street - yet numbers are at the heart of understanding the universe. Clegg covers a wide variety of subjects to seek out the truth of the matter in an engaging and hugely accessible way. I personally couldn't put it down, and as an active researcher in the field itself, it has provided me with some very real food for thought. - Amazon A compact, very readable, and highly entertaining history of the development and use of mathematics to answer the important practical questions involved in advancing civilization . . . [a] sense of wonder permeates the entire book. There are courses in music appreciation and art appreciation, and if there is ever an institution with the good sense to create a course in math appreciation, this is absolutely the book I would want to see used for it. And that doesn't even include the historical insights and sidelights that add to the pleasure of reading this book . . . a superb introduction to mathematics, science, and that branch of philosophy devoted to exploring the nature of reality. --此文字指其他 kindle_edition 版本。

BRIAN CLEGG is a prize-winning science writer with a physics degree from Cambridge and a masters in the mathematical discipline operational research. He has written over 20 science books and articles for newspapers and magazines from The Observer and Wall Street Journal to BBC Focus and Playboy. He lives in Wiltshire, England, with his wife and two children. --此文字指其他 kindle_edition 版本。

Randolph Eck
5.0 颗星，最多 5 颗星 Interesting discussion on numbers and mathematics
2020年6月13日 - 已在美国亚马逊上发表
已确认购买
Going way back, one can see how a simple tally actually requires no concept of numbers. Why you could just use the fingers on your hand. As far back as the ancient Sumerian civilization, various number representation were in use. One of the earliest written number systems can be found in the Babylonian culture, where they employed a base-60 system. The Greeks used the standard letters of their alphabet to represent numbers. The Romans had the Roman numeral system. The Pythagoreans believed that numbers were not just a human creation, but provided the underlying architecture of reality. When it came to fractions, the Greeks thought of whole objects that would fit into another object several times.

In the end, though, math can only approximate to the actual universe. Whole numbers have real-world equivalents, but fractions don’t, and the shapes of geometry fall down when faced with the physical world, which is constructed of atoms and lines that have width and aren’t perfectly straight. Then there is the concept of zero. It appears that Arab mathematicians got the concept from the mathematicians of India. The oldest Indian example of a placeholder zero is in a stone tablet dated 876 CE, but it was likely in use before then. By the time of the late Alexandrians (c 250 CE) approaches to algebra had reached an intermediate level.

There is a bit of material on a sixteenth-century politician and philosopher named Francis Bacon, who left behind his Opus Majus, which gave an incomparable picture of the understanding of the world at the time. He saw the importance of mathematics in the sciences and that it made the human mind better able to address and understand nature. We now see the work of Bacon and his successors as bridging the natural philosophy of the day and the true science of the future. Also in the sixteenth century, Girolamo Cardano introduces us to the basic idea of an imaginary number. He was ahead of his time, as the usefulness of this concept became more apparent in the nineteenth century via Carl Friedrich Gauss. Also around this time we have the work of Newton and Leibniz concerning the development of calculus, but it took Karl Weierstrass, in the 1850s, to introduce the concept of limits, which allows establishing a final value as something is made infinitesimally small. Calculus, by the way, was derived “not from obscure mathematical considerations but from understanding how things change in nature while taking smaller and smaller views on them.”

Chapter ten delves into the world of statistics. The first statistician was John Graunt, who was, incidentally, a button maker. Earlier Girolamo Cardano wrote the first book on probability before he was thirty. We are provided with a host of various probability exercises to boggle the mind. By the 1800s, James Clerk Maxwell became the first in the field of science to put forth a theory where “the mathematics operated in true abstraction from reality.” Speaking of reality, how about the lemniscate or the symbol for infinity? Introduced by Newton’s contemporary, John Wallis, this concept played an interesting role throughout its history. Then there is the concept of set theory – the theoretical foundation for basic numbers in mathematics. This was a bit confusing to me with the talk of aleph-null, the basic infinite set, and subsets and cardinality. By the twentieth century, Einstein had to shed flat Euclidean geometry in order to deal with curved surfaces. Notably, we have situations with four dimensions where all were curved. Through the work of Emmy Noether, we learn of an unbreakable link between symmetry and conservation.

In concluding, the author argues that the universe is inherently not mathematical. Instead, it is more of a great tool that can build models of the universe. So perhaps numbers are real at their most basic, but most of mathematics is not.

Ronald Fernandez
2.0 颗星，最多 5 颗星 Disappointing
2017年4月1日 - 已在美国亚马逊上发表
已确认购买
Unfortunately this book undermines itself. The author embarks in a complex epistemological enquiry and does not even state the problem adequately. I found him hesitating and trying different and not too coherent anwsers to the initial quest. The final chapter is the most dissappointing for it leaves one back at the beggining.
阅读更多
4 个人发现此评论有用

David Holladay
4.0 颗星，最多 5 颗星 The question remains unanswered...
2017年4月30日 - 已在美国亚马逊上发表
已确认购买
Ok, good on the history of numbers as a tool but I was left feeling that the question remains unanswered -- are numbers real? Beyond the use of numbers as "abstractions" of actual things I felt it was a bit light on delving into number theory and to what degree numbers themselves, as a construct can be said to be real...
阅读更多
5 个人发现此评论有用

Patrick Cumby
4.0 颗星，最多 5 颗星 A good overview of how math came to be used to describe the physical world
2018年12月11日 - 已在美国亚马逊上发表
The title is a bit misleading, as the book is more concerned about answering the question "Are *mathematics* real?" Clegg does a great job of explaining how the use of numbers (as in counting the number of goats in your neighbor's pasture) led to the development of arithmetic, geometry, statistics, calculus, etc, and how all of these branches of math were developed in order to solve real-world problems. He shows how some of even the most abstract concepts in theoretical math have come to be valuable in the modern age of computers and cell phones. He demonstrates how math has become an indispensable tool for the modern world. He also cautions us that math is a tool to understand reality, and that many complex modern theories may be based too much on the math and not enough on actual empirical evidence.

In presenting a topic as difficult as the whole of mathematical endeavor, Clegg does a good job of keeping the language down to Earth. This is definitely a book that can be read and enjoyed by almost anyone interested in the history of science--no college math or science degree required.

In the end, I would recommend this book to anyone interested in understanding how we search for truth in the physical world around us.
阅读更多
2 个人发现此评论有用