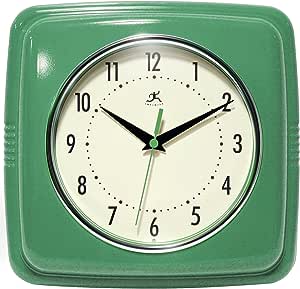 ArtistEye
5.0 颗星，最多 5 颗星 Now happily moving through the seconds, minutes and hours. Looking good!
2017年9月21日 - 已在美国亚马逊上发表
已确认购买
We had a rough start. As soon as I got it, I put a fresh battery in it, and the second hand started moving backwards. Erratically, slowly, but definitely backwards. I tried a different battery, with no success, but on the third try (I hear that the third time's a charm) the clock began moving swiftly into the future. Bad batteries? I don't know. Maybe the wrong type. One of them might have been a NiCad.

I like the clock, and I like the price. I agree with other reviewers that it's framework is very thin. I wouldn't want to drop it or bang it. But as long as it's on the wall, it looks very solid, and rather retro. It would look great in a kitchen, especially if you have some of the retro KitchenAid appliances, or Fiestaware.

For us, the dark red works with the living room. We have a (fake) Oriental carpet in the living room, with a lot of red and dusty blue patterns, and furniture that ranges from mocha to espresso brown.
阅读更多
12 个人发现此评论有用

Kindle Customer
4.0 颗星，最多 5 颗星 I like the look of the clock
2017年4月28日 - 已在美国亚马逊上发表
颜色: 绿色已确认购买
I like the look of the clock, & of course it's running fine because I've only had it a couple of months. The green base is plastic (rather than metal) which seems a little cheap to me. But the metal one that I used to have, cost almost twice as much as this one. So, as long as you hang it on the wall & don't touch it, you'll never know it's only plastic.
阅读更多
11 个人发现此评论有用

Angela A.
5.0 颗星，最多 5 颗星 Love how this clock looks!
2018年11月12日 - 已在美国亚马逊上发表
已确认购买
Great clock.
Nice size with easy to see numbers and sweeping second hand.
Since it is plastic, it is easy to hang.
This blue color is very dark and looks almost black. But It looks great.
阅读更多

I like my clock. Well, I more than like it, it think its very cute.
I LOVE that it doesn't tick, and that the second hand moves continuously and doesn't do the spastic 'let's stop for every second' thing that produces that obnoxious tick. I love that- with insomnia and anxiety, I cannot stand ticking when I'm trying to fall asleep at night, so this clock doesn't interfere with my sleep (doesn't that sound a bit stupid? but, MAN, the tiniest things drive me insane.........)
It's a nice, CALM clock.
Very nice color.
However- I did know based on the item description that it was plastic, but I definitely did not expect it to be as thin as it is. It is VERY thin. This isn't a huge problem though- unless the clock would happen to fall, which, in that case, the plastic would DEFINITELY break. And seeing that I bought this as a replacement for my last clock, that LOST ITS HANDS WHEN IT FELL (I'll assure you, that was not an Infinity clock), I do have some concerns.

Other than the thinness of the plastic, I do not mind that it is plastic. It looks like metal when its hanging, and looks like it was more expensive than it was... NOTHING is better than that. I also figure that it's lighter with the thinness, so that's a plus.