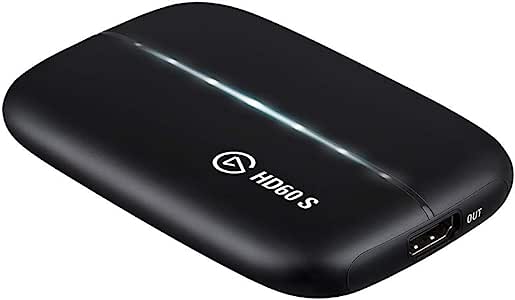 First, make sure you have all 3.0 USB on your connections and on your computer. If you don't have that, you gonna run into the same issue that everyone else is running into, no signal. You will get frustrated and in the end it's a simple fix.

Second, if you're a streamer, please do no set the recording to be recording at all times, that will make your stream lag. specially if you have a slow connection. Frames will be lost and you will become upset.

Third and lastly, if you just download the program on the website, make sure that you are downloading the right version. DO NOT download the windows 10 version if you have windows 7, it will not work. Same for all the mac users, please do your research before buying something like this. It is not cheap just to be throwing money at things just to keep them collecting dust.

I hope this helps someone out there.

I got one and I enjoy the products that they sell. I never had any issues and everything runs just fine.

Rule of thumb: If you can't figure out what's wrong with it, search on the internet, someone most likely is running into the same problem as you are. Google is your best friend people! USE IT!

benjamin bannister
5.0 颗星，最多 5 颗星 Easy To Use, Easy To Capture
2017年7月18日 - 已在美国亚马逊上发表
样式: HD60 S已确认购买
I write this from the perspective of someone completely new to video game capture (which isn't much different from regular video capture). I was recommended the HD60 S model by a lot of gamers online, so my choice was easily made for me.

— DIFFERENCES —
The main difference between the HD60 and HD60 S is that the S has the lowest delay between the game on your TV and the preview on your computer. I also got it because it records at one resolution setting of your choice while the HD60 can steam at one resolution while recording at another. The HD60 S also comes with a USB-C to USB cable versus a USB to USB cable.

After the software is installed, research online which settings are best for your video game system, or, if you know what you're doing you can choose exactly what you want. If you plan on editing this, the usual route is to record at a high setting (1080p) and reduce down to what you need. At least that's what I do. From there, you can organize your raw video files and edit using your preferred editing software.

— SUMMARY —
Video capture has come a looong way since I started doing it years ago with FireWire (what a headache that was). This device is the distillation of simplicity and usability. Anyone can easily understand and use this device. Recommended.

Seventh-777
5.0 颗星，最多 5 颗星 Works perfectly for using an iMac as a monitor for PS4/XBox!
2018年2月7日 - 已在美国亚马逊上发表
样式: HD60 S已确认购买
I bought this so that I could use my 2018 27" iMac as a monitor for my PS4. It works brilliantly! I run their Game Capture HD software in full screen with the controller connected to my PS4 and there's no lag at all - crisp, smooth graphics and no sound issues.

Worth mentioning! I almost returned this - you MUST disable HDCP mode on your PS4 for this to work, otherwise you'll get a black screen and stuttering sound in the software. Once HDCP is disabled it works like a charm.
阅读更多
146 个人发现此评论有用

iBoolGuy
3.0 颗星，最多 5 颗星 Approach only if you absolutely have to. Disclaimer: You rarely have to..
2018年5月29日 - 已在美国亚马逊上发表
样式: HD60 Pro已确认购买
I've had this thing for over a year, and still struggle using it.
It creates an immense delay when it's plugged in, like when the PC powers on, the screen takes longer than usual to show signal.
The colors look oddly different, and even when turning off the HDMI color range from their software, the screen with the card on it, looks different, washed out, compared to another identical screen, that's not connected to the card.

The fact that it cannot pass through signal without the software being installed, that was a big bummer for me. I hated dealing with it so much. You have to install the hideous software first, and then connect screens to the card.
The other fact that it cannot pass through 144Hz signal, another huge bummer, I mean, ok, I don't want to capture footage at 144Hz, but at least let me have an option to use the card as a plain pass through.

All of the above, are the reasons to take away 1.5 stars. The other 0.5 star, goes for the software. I don't wanna even start on that. It is so bad, I've had literally my worst times ever using that software. Hated it so much. OBS IMO, is miles better and more comfortable to use. Way less bugs.
阅读更多
71 个人发现此评论有用
加入亚马逊Prime，从此免运费
亚马逊Prime会员可享海外购美/英/日/德跨境免邮，全年无限次！更有免费无限次阅读电子书服务
> 立即加入
了解我们
合作信息
帮助中心和购物指南