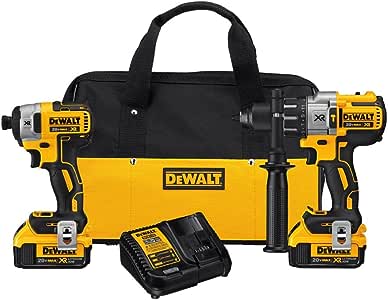 Mac
5.0 颗星，最多 5 颗星 Seem to be good tools
2019年5月16日 - 已在美国亚马逊上发表
尺寸: 4.0 Ah样式: Combo Kit已确认购买
I'm glad I bought these. I didn't want the impact driver but elected to get this kit because they're cheaper when you buy it all together. The tool bags are great, too.

The drill is great. As well balanced as you can get for a 3 speed drill with a chuck like this. The light has 3 settings, so if you actually think you'll need the light, you can turn it up pretty bright. The clutch doesn't let the motor keep spinning while it's slipping, it 'shimmys' the motor for a half second or so (and then stops) when it senses the load to be more than the clutch setting. Reduces mechanical wear and power consumption. The chuck seems to be very well made, and is pretty easy to wrench down on a drillbit with. Metal sleeve too, no plastic. If you want to use it, the handle goes on sturdy. The only thing I don't like about the drill is that the 'safety' is a little flimsy. It doesn't take much to pop it into F/R. Gobs of torque in the low speed, and a fast bit in the highest speed.

The impact driver is great. There are 3 "torque" (speed) settings, and the tool is very well balanced in your hand. The light is radially around the hex chuck, rather than at the foot of the tool, like on the drill. I haven't used it as much but it seems very well made. To my surprise, the 'safety' on this is pretty stout.

Both of these tools seem to be well made, and I actually like the brushless motors. I'll update this review when these have seen their days with regard to longevity or battery life, but I'm looking forward to using them more.

Being 20V, this has a little extra power from the voltage alone. For those who don't know a lot about electricity, the voltage is electrical potential. It is like sitting on a bicycle at the top of a hill: you have potential energy that can be realized when you coast down the hill. The larger the hill, the more potential to go faster at the bottom. 20V is just a little more than 18V, so the hill is a little taller. This means slightly more torque from the electronics alone.

When compared to a brushed motor, brushless has more power. Less energy is wasted as friction (heat) since the rotor and stator have an air gap between them. A brushed design has brushes that make contact as the rotor spins. That generates friction, heat, and they eventually wear out and need to be replaced. Brushless motors are more complex and expensive but do away with that, generating more power output at the rotor for the same power input.

In addition, brushless motors tend to be smaller. This means the drill and impact driver are both smaller than my old ones, and this is critical for the drill.

I am a big fan of Irwin Speedbor drill bits - specifically the three-bladed bits with flutes and the screw nose. That pulls the bit through wood, making it quick and easy to drill holes at least until you get to the back edge. Anyway, drilling holes through joists or studs to pull wire where the framing is already fully installed can be difficult or impossible without a right-angle drill: the drill and bit can be wider than the stud/joist cavity (14.5"). However, a 4" Speedbor bit in this drill (shorter because brushless) easily fits in a standard stud cavity with plenty of room to spare. I no longer need to beg borrow or steal a right-angle drill.

The impact driver is an impact driver. Nothing special to report on that, just that it does its job as one would expect. Same with the charger.

I like that this kit comes with a 4AH battery. Many of DeWalt's kits come with wimpy 2AH batteries. Those will not last as long - half as long, to be precise. Better to have the extra longevity to get the job done without swapping batteries in the middle.

This may be more expensive than the non-MAX variety, but it is worth every penny and I regret nothing. Go big or go home!
阅读更多
12 个人发现此评论有用

Tim Brassfield
5.0 颗星，最多 5 颗星 Worth it.
2020年4月18日 - 已在美国亚马逊上发表
尺寸: 4.0 Ah样式: Combo Kit已确认购买
I do a lot of odd jobs and have been using a 30+yr old corded drill for a long time now. I bought these to replace it after it died in a tragic act of clumsiness.

The compact impact drill is awesome. The low setting is perfect for tight spaces and generlscrewing. Will get things tight without overtightening or stripping.

The drill has a lot of power and really works well. I haven't used the hammer function yet. The Chuck is solid and easy to use. When in mode 2 and 3 it will click when you press or release the trigger this is normal. I had to do a bunch of research to learn that so don't let it throw you off.

Not sure on battery life yet. Did 2 solid hours of work with no issues. Will need more time to really know.