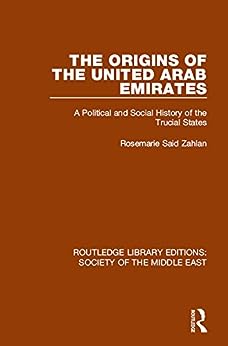 The Origins of the United Arab Emirates: A Political and Social History of the Trucial States (Routledge Library Editions: Society of the Middle East) (English Edition) 1第一 版本, Kindle电子书

The creation of the United Arab Emirates in 1971 ended a century and a half of the existence of the Trucial States in special treaty relations with Britain. This book, first published in 1978, describes the evolution of tribes and their rulers’ authority over time, and the tribes’ treaties with Britain as it sought to exercise imperial control over its trade routes. Analysing changes to society as well as the politics of the region, this book analyses the formation of the United Arab Emirates.