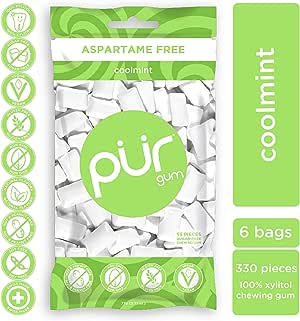 R. Morris
4.0 颗星，最多 5 颗星 Probably my favorite Pur flavor; good "natural" gum with some drawbacks
2017年9月12日 - 已在美国亚马逊上发表
已确认购买
I've tried several varieties of Pur, which is one of few gums I can find that don't contain, artificial colors/flavors, sugar, or artificial sweeteners (but that preferably do contain xylitol). I settled on this one since it was reasonably priced given my criteria and had good reviews.

Most of the flavors I've tried taste good. All of their other flavors I've tried are some variety of mint--both traditional mints like spearmint and peppermint, but also combinations like pomegranate mint and chocolate mint, both of which sound a bit odd but also taste fine. However, I think cinnamon is my favorite. I do have to main issues with this gum, the reason for my one-star deduction on an otherwise good product. First, the pieces are small. You'll need about two to get enough to really chew on, so even though a bag contains about 60 pieces each, you definitely won't get 60 "chewing sessions" out of each--more like 30. Second, with most flavors, the flavor doesn't last very long before the gum just starts tasting like nothing or even becomes a bit unappealing--for most flavors, I'd give it at most 10-15 minutes, though in the best cases there is usually at least some redeeming residual mint aroma. For this flavor (cinnamon), it's seems to be on the upper end of that, and the residual flavor isn't that unappealing. This is something I'm willing to tolerate for gum that has pretty good ingredients (and perhaps the natural flavors and sweeteners inherently just can't last as long as others), but it's something you should be aware of in any case. I mostly like to use it to help clean my teeth after having a snack or while driving (or sometimes just while bored and vaguely hungry) or at other times where brushing my teeth would be impractical, and for that purpose this works well.

To summarize, Pur is great, but the pieces are small and the flavor doesn't last that long (a tradeoff you'll find with most "natural" gums, it seems), but these are tradeoffs I'm willing to make. Cinnamon is probably my favorite flavor they make since it lasts longer and tastes good, but none are particularly bad.
阅读更多
203 个人发现此评论有用

tjhfiori
5.0 颗星，最多 5 颗星 Evacuate your bowels!!!
2018年5月17日 - 已在美国亚马逊上发表
已确认购买
As far as chewing gum goes, it kind of has a chemical taste. I only chewed one piece for about 90 seconds before I spit it out right before I got in my car to drive 15 minutes to work. I think I was driving about 100 mph for the last five miles (which isn’t good because I use a company car) so I could get to the bathroom. Lucky for me, the path to the restroom was clear and the stall was free. And so was my bowels. I must have dropped 10 pounds in that sitting. The best thing about it was it was a one episode series. I felt fine, and light, the rest of the day. I’ll likley buy more when I run out. I give it to my frienamies and I’ll use it again if I’m ever constipated.
阅读更多
97 个人发现此评论有用

Jenna Bee
5.0 颗星，最多 5 颗星 Soy free gum good for cleaning teeth.
2017年8月31日 - 已在美国亚马逊上发表
已确认购买
This is my favorite gum and I'm happy to find one that is soy-free. I chew it after a meal to help clean my teeth if I can't brush. As many people pointed out, the flavor doesn't last long but since I only chew it for a few minutes, that's okay with me. I've tried several different flavors:

Spearmint: This flavor lasts the longest and has a light mint flavor.
Wintergreen: The strongest minty flavor. I like it but it irritates my mouth if I chew it to much. (I have an especially sensitive mouth.)
Cinnamon: Tastes like the typical red-hot flavor. I don't usually buy this because I also find it irritates my mouth.
Coolmint: A gentler mint that reminds me of teaberry flavor.
Bubblegum: I like this flavor but it only lasts a max of 2 minutes then tastes bland. Least irritating flavor. I'm glad there is one non-mint option.
阅读更多
99 个人发现此评论有用

Kimbintine
5.0 颗星，最多 5 颗星 Tastes great and great for your teeth
2017年6月2日 - 已在美国亚马逊上发表
已确认购买
Splenda will increase your blood sugar, it has sugars in it It is a no-no for diabetics. Sucralose alone may increase your blood glucose and it can also interfere with prescription medications according to the FDA When I found that out I started looking for different sugar substitutes. The sweetener Xylitol has a very low glycemic index of 7vs regular sugar's 95-100. This gum is the absolute BEST !!!!!!!!!!! The flavor does not last as long as some of the other brands I won't chew anything else ever again. It is made with xylitol which is actually good for your teeth. I need to chew gum or suck on hard candy (sugarless of course) because my mouth is very dry. I have tried products that are specifically for dry mouth, but this gum tastes much better. I love the bubblegum flavor, it tastes just like regular bubble gum. I gave some to my great nephew who id 6 and he said "This tastes just like my gum" which was Double Bubble.
阅读更多
61 个人发现此评论有用
加入亚马逊Prime，从此免运费
亚马逊Prime会员可享海外购美/英/日/德跨境免邮，全年无限次！更有免费无限次阅读电子书服务
> 立即加入
了解我们
合作信息
帮助中心和购物指南