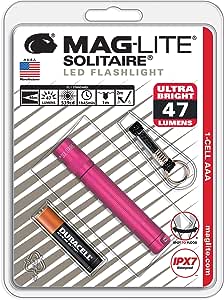 Gruddy
1.0 颗星，最多 5 颗星 They are the very best - if you can get them to last more than a year.
2018年5月9日 - 已在美国亚马逊上发表
已确认购买
Really mixed feelings about this light. I have carried one in my trouser pocket for years, they are very handy. However, I have to replace them almost every year because of battery corrosion. I use only Duracell alkaline or EverReady alkaline, both good reputable batteries. But no matter which I use, sometime around a year into use they swell up and get stuck inside the aluminum tube. (Actually, I have this problem with other sizes of Maglite as well, fortunately the "C" and "D" cell models more easily fixed.) It must be something to do with the aluminum housing since these same batteries don't do this in plastic flashlights. In recent years I have taken to disassembling every new Maglite and coating the insides the threads and the O-rings with Vaseline - this helps but is not a 100% effective preventative. We use all our Maglites in our house, cars and pockets - no boats, no camping - in other words they are always inside, high and dry. I know of no reason why these things should not last a lifetime - but they seem to be very destructive to batteries.
阅读更多
84 个人发现此评论有用

cactus
5.0 颗星，最多 5 颗星 so close to perfect.... 4.5 stars...updated to 5 :)
2013年6月23日 - 已在美国亚马逊上发表
已确认购买
you would think that someone that buys a solitaire wouldn't be serious about lights, but i am.
as a steamfitter, my job requires me to carry just a few tools with me at all times and weight adds up fast. i can use this light 20-50 times per day. i try to carry the lightest tools possible.

-takes an aaa battery. those button cell lights are worthless to me.

-at 37 lumens it's almost too bright inside small pipe. luckily, i'm a green fella and i like nimh batts. and at 1.2 volts, they take a little bite off the brightness while still leaving a very bright light.

-focused beam!!!! yep! if i fancy a flood to walk around the yard, it's there. if i wanna tighten up the beam to see across a big pipe or an otherwise longer distance, i have it! oh, joy; oh, rapture!

-great price. around 15 smackers is a dandy price and it should last years.

-it has a lens to ward off lint. cool.

cons:
-the threads are poor. when i unscrewed this baby, the bottom threads were loose and rough and the top threads were about the same. personally, i always tighten up the top (bulb end)threads of any maglite by wrapping them with teflon tape. do this at your own risk. i likes my threads smooth and tight. the problem with the bottom threads was mitigated with some very high-dollar never-seize. this also should be done at your own risk. a person could also use a tiny amount of silicone lube. once again, this is at your own risk.
*edit: i actually found that this stuff is the best lube for the threads if you don't want to make a mess with teflon tape. works really good and makes the thread action very smooth::
Silicone Grease 2 0 oz Jar
* edit 2: lets ease up on that con. my light has never failed due to the treads or anything else. still, lube ain't a bad idea.

-with 37 lumens coming from a single aaa batt.,somethings gotta give...and today that something is battery life (i'm comparing this light with my trusty fenix e01 here). the fenix, while only putting off about 10-13 lumens, has a batt. life of way over 20 hrs....this solitaire shuts off at around 2 hrs. with a stout alkaline and at about 90 minutes with a 800 mahr nimh rechargeable. i would really like to see this light knocked down to 20 lumens to bring an alkaline up to 8-10 hrs. but it's american made and we like hot-rods and hot-rods eat fuel, huh? well, i can deal with it with decent rechargeables because everything else about this little light just plain rocks.

-not a huge big deal, but a had to find a pocket clip to fit this. no biggie. a clip from a regular 2 aaa maglite will also work and keeps the light from rolling.

to end, this light was worth the wait. maglite did such a great job with this product. sure the threads need help, but that whole problem was fixed in a few minutes for me. the poor threads and the low battery life is what cost a star. if i could give another half star, i would.
the battery use is just fine for me. i figure i can pop in a fresh nimh cell every 2-3 days and my world will keep spinnin'.
Mag instruments just got my business back.
good job, folks :)

*update 11-5-13*
this baby has been through hell and it still performs flawlessly. sure, when i turn it on it sometimes flickers, but that's the nature of the switch and it doesn't really affect anything. this light is always on my person and it does not get babied.
some other guys that i work with have bigger and brighter (too bright imo) lights, but theirs are bigger and harder to carry on their person...so guess who is always loaning out his light? this guy!
i put a fresh battery in it every week and i have not had one go completely dead on me. i always carry an extra battery in my lunchbox, but i haven't had to break one out.
perfect luminosity.
perfect build (after the thread mitigations described above).
this is it. this is the light i have been searching for and i'm glad its an American company that makes it...it has earned it's name....and did you see the price? deal of the century.
*update 8-29-15*:
still. going.
but man is it ever beat up.
i average 1 battery charge/week out of this baby.
i don't even bother with a big trouble light when i have to crawl inside of a pipe for a repair (many times it's someone else's weld).
the guys that have the flash lights with a click-switch always have to buy new lights, but my silly little maglight just keeps on going.
after i bought this on, i bought some more because i figured i'd lose it (to a borrower, most likely), but i'm still using the same one.
because the battery lasts about 90 mins.(rechargeable nimh), i carry a fully charged battery in my lunch-box. i"ve never had to change batteries during the work week, so i guess 90 mins. is long enough.
the people that built this need to congratulate themselves.

*update 5-18-2017*
still works, but i bought a new one. i had beat this poor girl up for years and the lens was just to dirty/messed up to use anymore. i removed the lens and use it around the house now. it surely isn't maglite's fault. the amount of abuse the poor light went though was way above and beyond (also, it still works!).
here's to years of faithful service from the new one.

Mario
1.0 颗星，最多 5 颗星 Lights and then Dies
2018年9月11日 - 已在美国亚马逊上发表
已确认购买
So the flashlight is very small yet appears to be well constructed. The light is very bright, when it comes on, and lights up what I want sufficiently.

The problem is the light dies after about 5 seconds. I assumed this was a battery issue so I replaced the battery. No luck.. I then checked all the internal connections. Everything looks fine. I've spent over an hour trying to determine why the signal gets lost from unit to LED and can only come to the conclusion that there is a faulty connection inside the housing..

It would cost just as much if not more to ship back so gonna have to eat the cost of this thing.. Would not purchase again
阅读更多
20 个人发现此评论有用

PC_g4mer
4.0 颗星，最多 5 颗星 Portable, lightweight, bright!
2015年3月18日 - 已在美国亚马逊上发表
已确认购买
I think everyone has covered the specifics of the flashlight but I did want to add some visuals, so check out my photos. These photos were taken at night in a hallway about 12 feet away from where the door is. Photo shows the Solitaire Mag compared to the Mini Mag which requires 2 AA batteries both led versions. I currently have this in my vehicle first aid kit because of it's size and portability along with 2 extra AAA batteries as backup. The lanyard is super convenient and light weight for those who want a key chain light. I am VERY happy with this purchase.
Some highlighted features listed below directly from packaging:
1. 55m (Beam distance)
2. Lumens 37 (Light output)
3. 748 cd (Refers to the luminous intensity at the middle of the flashlight beam.)
4. 1h 45min (Run time is defined as the amount of time, rounded to the nearest quarter hour, until output drops below 10%)
5. 1m (Impact resistance from a fall of specified height)
6. Splash resistant from all angles. (Cloud icon with rain)

*Correction from another review. I think they stated lifetime warranty when it's actually 10 year limited.
阅读更多

Jeremy D. Sheffel
5.0 颗星，最多 5 颗星 Perfect Keychain light!
2016年8月4日 - 已在美国亚马逊上发表
已确认购买
I carry this light on my keys every single day. I use it every single day and love it. It's bright enough to go use the bathroom at night camping which is just enough for me. After a few years in my pocket the black is almost worn off and the thing is almost completely silver but it still works like a charm. Every now and then I will twist it on shoving it in my pocket without knowing it and run it dead but that's on me not the light. I lubricate all the threads every six months with petroleum jelly to keep it smooth and help with waterproofing. I have dropped it in the creek a time or two (I'm a bridge inspector so I spend most days in the creek) and it hasn't slowed it down at all. I've dropped it on concrete a fair number of times as well. Between this flashlight, a Bic lighter and a Leatherman I'm ready for about anything. Do yourself a favor and buy one.
阅读更多