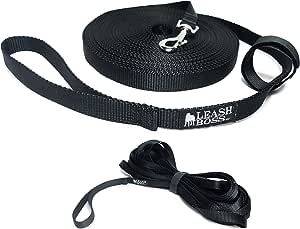 Casey Scott
5.0 颗星，最多 5 颗星 Awesome Lead for Playing Ball and Recall Training
2017年5月8日 - 已在美国亚马逊上发表
尺寸: 50 Foot颜色: 橙色已确认购买
I have a 1 year old 95 lb. Doberman/Lab mix named Monkey who loves to play ball at the park. We frequently go to dog parks to play, but when I don't have time we go to our local park that is enclosed. Initially I thought that he would be distracted enough by his favorite game to ignore other dogs, but that wasn't the case. One day we came to the park and he played with another dog for a bit on leash, then we went our separate ways. I had the tennis balls and thrower out and everything was going great, until he spied the other dog walking out of the gate at the far end of the park...he took off at full speed and did not stop, no matter what I said. Thank goodness he'd already met the dog and they were friendly, and luckily the dog's owner was patient enough to stay there until I could run over and grab him. I was so embarrassed! I'm a firm believer in respecting leash laws, especially since you never know if the other dog is reactive or not. In that moment I had failed as a pet owner and needed to find a solution.

I began looking for long leads and found this one with great reviews, so I decided to try it. I am extremely happy with the construction and the length! It allows me to throw the ball far enough so that Monkey gets a full speed run, but I can still reach the lead and stop him if needed. I attach the lead to the chest connector on a Ruffwear harness so that he doesn't hurt himself if he accidentally steps on it while running. It glides perfectly over the lawn and dirt while he's running and never gets caught up. Plus, it's easy to roll up and unroll with minimal tangles. The bright color alerts people nearby that he is on lead, even though he's running "free", and I've gotten many compliments for that.

It also allows me to practice recall at any time—if I say "come" and he doesn't, I'm able to pick up the lead from wherever I am and prompt him with a gentle tug until he responds to the command. We also practice "off-leash" walking together—I only allow him to go so far ahead of me before applying pressure so he knows what distance is acceptable. He's quickly learning how to stay with me and not go too far, all while being 100% under control at all times.

This is a great investment for any dog owner and I highly recommend it!
阅读更多
18 个人发现此评论有用

CMW
5.0 颗星，最多 5 颗星 super high-visibility, good length for playing ball
2018年4月9日 - 已在美国亚马逊上发表
尺寸: 20 Foot颜色: 橙色已确认购买
Durable, super high-visibility, good length for playing ball, hiking, and off-leash training. All long leashes get dirty, but this has a slick, nylon finish that looks like it lends itself to easier cleaning. The little tab of velcro is super handy to wrap the leash up in -- keeps the leash from getting tangled when not being used. Also, this long lead does not get tangled when the dog is running around and chasing a ball. It's wide enough to step on in case the dog attempts to chase a critter or run off. Do not use these types of leashes as tie-outs. They are not meant for unattended use! They are excellent for quality play time and hiking with active dogs. They are also useful for those wishing to train their dogs for off-leash or hunting purposes. The material is better than cotton for outdoor use - holds up to wet weather and sharp sticks or thick grass and weeds. Briars and burs do not tend to stick to the material because of the slicker finish. Good thickness and width.
阅读更多
8 个人发现此评论有用

Patti Thomas
5.0 颗星，最多 5 颗星 Best of the best!
2016年6月12日 - 已在美国亚马逊上发表
尺寸: 20 Foot颜色: 橙色已确认购买
This 20 foot heavy duty sturdy leash is perfect for my 4 1/2 month old German shepherd pup. It gives her freedom to run for a ball or frisbee and gives me security of knowing she won't run off. I started with the 50 foot but that is too long for this young age and will work great when she's older. I love the fact that I can fold it up and fasten it with the Velcro strap for easy storage. I am beyond satisfied and thrilled with my Leashboss leashes and recommend them highly!
阅读更多
11 个人发现此评论有用

old john
4.0 颗星，最多 5 颗星 Good economy Long lead
2018年5月24日 - 已在美国亚马逊上发表
尺寸: 30 Foot颜色: 橙色已确认购买
Good training leash, beware the nylon edges are not the smoothest and are hard on bare hands. I use lightweight work gloves when out training. Not ideal but for limited use I can live with it. To those of you that have not used a long lead before, be very careful how you use this with your dog. Best used in open, grassy areas without brush, etc to entangle and snag the lead and potentially trap your dog. Educate yourself on the use of this training aid. Be safe!
阅读更多
5 个人发现此评论有用

David Hawley
5.0 颗星，最多 5 颗星 Nice strong lead that is easy for dog to drag
2016年3月16日 - 已在美国亚马逊上发表
尺寸: 50 Foot颜色: 黑色已确认购买
I have had this leash for a few days now and really like it. Compared to previous 50' leads tested this one has less friction sliding through the grass so creates less pull for the dog. My dog is only 30lbs and with a good harness she seems to barely notice the lead.

The attached velcro strap for keeping the leash coiled is a nice touch. Keeps my bag tidier :)