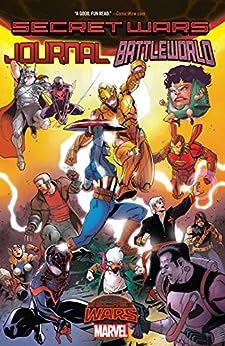 Tales from across the landscape of SECRET WARS! Is Lady Kate of 1602 the notorious Hawkeye Bandit? Can enslaved mutants overthrow Khonshu? Kraven hunts, Matt Murdock cooks, Wolverine investigates and Doc Samson tries to bring sanity to a land of Hulks! The Punisher and Iron Fist! Night Nurse! MILL-E: the model citizen! Plus: Fights, fights, fights! A Doctor Strange-possessed Frank Castle against the New Fantastic Four! Cowboy Deadpool and Devil Dinosaur! Silver Surfer vs. Maestro! Wolverine vs. Wolverines! All the M.O.D.O.K.s! The Agents of Atlas rebel against Baron Zemo! And pity poor Howard the Human, trapped in an anthropomorphic animal realm he never made!
阅读更多
Previous page
Next page
由于文件较大，下载时间可能较长。
›  查看更多商品促销信息
该系列中的图书（1 本书）
完整系列 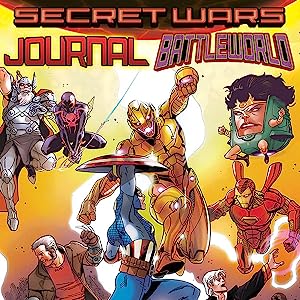 clairetoldmetochangemyscreenname
4.0 颗星，最多 5 颗星 A Series of One Shots Based Around Life in the Battleworld of Dr. Doom
2018年9月18日 - 已在美国亚马逊上发表
已确认购买
Secret Wars Journal and Battleworld is a series of one shots and vignettes that take place across the Battleworld constructed by Dr. Doom during Secret Wars. While not an absolute must-read for fans of the event this series certainly has some great highlights between the one shot of Matt Murdock serving as Mr. Sinister's chef or Howard the Human being the only one of his kind in the cartoon/animal world. While a few of the issues are less than stellar (Mojo forcing all the various Wolverines of Battleworld to duel) some are absolutely fantastic (the aforementioned Daredevil issue is by far the best, an issue about General Ross in War Machine armor fighting in the gladiatorial arena is another stand out). What keeps this book from being a just okay mixed bag is that the artwork is consistent and no issue overstays its welcome thanks to the constantly changing settings and characters. A great read for anyone who is a fan of the main event story or just interested in the patchwork world Doom created.
阅读更多
2 个人发现此评论有用

Thanatos
5.0 颗星，最多 5 颗星 The Secret Sucess
2018年1月25日 - 已在美国亚马逊上发表
已确认购买
Whatever your thoughts are on Jonathan Hickman's Secret Wars (2015), most will agree that the tie-in books were the weakest part of the event. The majority of them ranged from terrible to mediocre. There were a few small gems I found personally very good, such as Wolverine: Old Man Logan Vol. 0 Warzones! and Civil War: Warzones!, but aside from them very few left much of an impact. One of the main problems with these miniseries was they didn't feel much like tie-ins, instead more like a ton of "What If?" stories with little to no connection to the main event. Almost none of them fleshed out the world of Secret Wars at all. Luckily this was not the case with Secret Wars: Journal /Battleworld. These two miniseries collected into one volume go the opposite route. Showcasing the talents of a huge number of Marvel writers and artists, we are treated to the number of short stories exploring the new and familiar worlds and characters of Battleworld. Some are funny, some are serious, and some just go for over the top fun. We also get in the volume a funny one-shot comic by Skottie Young, that flips the the premise of Howard the Duck on its head, by sending a human named Howard to a world of talking animals. This is the best companion volume to get alongside the Secret Wars (2015) event. I highly recommend it, just for how fun and creative it is.
阅读更多
2 个人发现此评论有用

Kindle Customer
3.0 颗星，最多 5 颗星 Yuck
2018年2月26日 - 已在美国亚马逊上发表
已确认购买
It wasn't that good. The storylines were horrible. Not one of Marvel's best work. I like the secret wars stuff in general
阅读更多