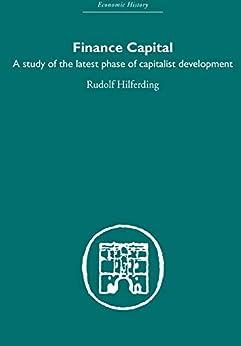 This is the first English translation of one of the classical works of Marxist economic theory. When Rudolf Hilferding’s Finance Capital was first published in 1919 it was acclaimed by reviewers as a continuation of Marx’s Capital, and it has a major influence upon subsequent Marxist thought, especially in the analysis of imperialism where it provided some of the fundamental ideas for the theories of Bukharin and Lenin.

But Hilferding’s work was much more than a study of imperialism, which was presented only in the last section of the book. It set out to examine the main tendencies in the development of the capitalist mode of production as a whole at the beginning of the twentieth century, beginning with an exposition of the theory of money (in which particular attention was paid to the growth of credit money), then analysing the increasingly important role of the banks in the mobilization of capital, along with the development of large corporations, cartels and trusts, and finally outlining a theory of economic crises.

Hilferding’s book has, however, more than an historical interest. It is a model for any renewed attempt to understand the ‘latest phase of capitalist development’ in the closing decades of the twentieth century, and Hilferdin’s ideas still provide essential elements for the elaboration of theoretically enlightened and realistic policies in the socialist movement.