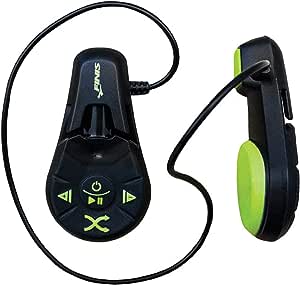 The Duo is an MP3 player designed for swimmers that offers the highest quality sound without the use of ear buds. The Duo utilizes a sleek, two-piece design and Bone Conduction audio transmission to deliver crystal clear audio through cheekbones to the inner ear. An integrated clip design secures the Duo to goggle straps to rest on the cheekbones for a comfortable and streamlined fit. A simplified interface offers four buttons to easily navigate between songs, podcasts, audiobooks and other supported audio files. The Duo supports unprotected MP3 and WMA files. The included USB magnetic dock allows for universal data transfers and charging. The device offers 4GB of flash memory and a Lithium-Ion rechargeable battery life of up to 7 hours.

dolphindude
5.0 颗星，最多 5 颗星 What they don't tell you...
2017年3月18日 - 已在美国亚马逊上发表
颜色: Black/Acid Green已确认购买
I've used every SwiMP3 model Finis has come out with since the beginning. It's addicting in the sense that once you get introduced to this style of patent pended bone conduction audio, it's hard to imagine going back. And, with previous models, there have been many shortcomings as it relates to product durability and the infamous ability to connect your device to the computer much less a USB charging hub...

Here is what they don't tell you because they probably don't even know- the contacts on the unit are prone to mineral build up- to the point of no longer being able to connect or charge the unit. I've had conversations with their tech support department and they have sent me replacement chargers and even issued a RMA for a replacement. NO NEED- if you are having connection issues- here is the ultimate tip I can share...

Go to a hardware store and buy some CLR- the calcium, lime rust stuff you use for other things. Fill it in short glass just high enough to submerge the side with the contacts (only about 1/2 inch or so deep). Soak your unit for 4-6 hours and then rinse- the contacts are as good as new!!! I stumbled across this solution when I was using CLR to clean the spray nozzle of the kitchen that had a lot of build up- who knew. No more need for a RMA, and the unit connects to the dock (magnet or no magnet) every time (make sure it's dry of course).

As for their rubbing alcohol method with a qtip- tried it- does not work. But think about it- you wouldn't use alcohol to remove your mineral build up on anything else, so why use it on your unit you are swimming with?!

Other tips- loop just one of the 2 straps to the unit of your goggles that have double straps. That way- he unit is secure enough to be stable through flip turns but does not mess with your goggles leaking depending on how they are positioned on your head. In past versions and even in this one, my goggles are prone to leaking if I put both straps over the unit.

I have done the infamous Big Shoulders 5k open water swim and the monster swims (100x 100s on set interval) with this unit and never had an issue following the tips I shared above. I swim masters and hit about 4-6 practices a week depending on if I'm doing doubles for part of the season.

if your product is not working and you know there is something wrong with it that everyone is aware of of stop shipping it back to people. Also, why do you I have to pay for return shipping of your defected product? It is like a monthly membership program...
阅读更多
108 个人发现此评论有用

Stewey
3.0 颗星，最多 5 颗星 This would be a great product except for the electrical connection corrosion issues.
2017年1月7日 - 已在美国亚马逊上发表
颜色: Black/Acid Green已确认购买
I had the predecessor to this - the SwimP3 for several years. I decided to replace it because the o-ring had been leaking and the connectors were heavily corroded. So, since I had such good luck with the previous product, I decided to go with their new generation product, the Duo. This would be a great product except instead of using an electrical conductor that is resistant to corrosion (gold plating maybe?) they apparently chose something that does not do well with chlorine. After 20 hours of swimming, my computer would not recognize the unit or charge it. Turned out not to be a PC problem, but corrosion on the contacts between the charger and the Duo. I have found that I have to use a drop of vinegar on the contact and then rub it with a toothpick to clear off the corrosion so that it will work again. This would be a five-star product if it weren't for this problem but after many years of producing a swimming mp3 player, they should know better.
阅读更多
47 个人发现此评论有用

Sandra Lee
1.0 颗星，最多 5 颗星 UPDATED
2016年12月18日 - 已在美国亚马逊上发表
颜色: Black/Acid Green已确认购买
I bought the first one they came out with..loved it!! Swam with it for years until it died. I didn't buy the second one as I seen all the problems it had, plus i didn't like that it sat on the back of my head. I did however buy the Duo....well it worked great for awhile, then it wouldn't charge. I came back into this site to do a review for that, and found there was a "new docking system" one that had a magnet. Finis sadly did not let me know about this problem or the fact that they took care of it. It was up to me. So I sent in for the upgrade, giving them my numbers on the unit as they asked.
I used this for a few month, and now as I try to get it to charge it just won't charge. The best solution was a gentleman's idea of using a clip to hold it together and NOT move it. this worked, THANK YOU. Now it's time for some new music, different music.....l now my computer won't recognize it. There is NO icon to be found. I can't get it to work on any computer.

So here I am again....... saying DO'NT BUY THIS!!!! I don't like giving reviews like this. I really like the concept of it sitting on the bone, as I don't like things in my ears, I don't even like a cap over my ears when I swim.
So for now I swim w/o music. :( Until someone comes up with a better one, I am tired of messing with Finis. Sorry Finis you had a great thing going with your first one. I shouted that one to the roof tops and my friends bought it, this one I tell them not to.
unhappy customer,
Sandra Lee
Update, I still use a clip to charge it, even w/the stronger magnetic charger that FINIS sent. now the on/off button don't work. It does..sometimes. I will mess w/it before a swim, not getting it to work, only to come back and find it playing. :( This has been worthless to me.

3.17.17 I contacted FINIS, because again I had problems with my player. Finis asked me to send them the product. They (FINIS) sent me a new one. SO far, I have not had any problems. BUT today is only the 18th. :D I was able to get it to charge, it held well in it's charger, I was able to up load songs to it w/o a problem. It turned on and off well. It plays well... now if it will do all that while I swim. :D
MAYBE JUST MAYBE FINIS has gotten all the problems fixed. :D I up my starts to 3.... i'll come back in a few months and let you know what I think, as I swim w/it and keep playing with it.

7.5.17 - I am back for an update. Again it won't hold a charge, either that or the on off button don't work. I again can't get it to play. Dropping down to ONE star.
阅读更多
52 个人发现此评论有用
加入亚马逊Prime，从此免运费
亚马逊Prime会员可享海外购美/英/日/德跨境免邮，全年无限次！更有免费无限次阅读电子书服务
> 立即加入
了解我们
合作信息
帮助中心和购物指南