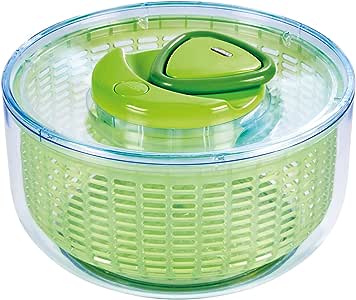 M.
5.0 颗星，最多 5 颗星 Reunited!!!
2015年10月26日 - 已在美国亚马逊上发表
已确认购买
My kitchen nearly came to a screeching halt when 'someone' in my kitchen got a little overzealous with my Zyliss Salad Spinner. You see, I bought it years ago (I believe at Bed Bath & Beyond) and it had become an integral part of my kitchen... it had taken a beating to be sure. It had been warped by boiling water (really people, watch which sink you drain the pasta in!), it's lovely clear blue bowl had slowly become hazy after years of dishwasher abuse, it had been dropped so many times without ever uttering even the slightest disgruntled sound! It took a beating and never complained. But then... pauvre Zyliss was introduced to the man of the house, or rather the man of the house was introduced to my sweet, harmless, hard-working Zylee baby. It was too much... the temptation to spin the basket ever faster and faster while watching the contents being wrung ever dryer and dryer through the lovely clear bowl was too much temptation and no matter how many warnings were uttered from the other side of the kitchen the urge won out until... snap!

I felt... well, I felt sick! How would I ever get my dressing to stick to my micro greens again? How would I keep my sandwiches from getting soggy from over-damp red lettuce... how would my baby spinach manage? Where would I now find that ever-so-satisfying pleasure from pushing the brake button and watching the water droplets slam helplessly into the bowl's sides; where would a find another Zyliss?! Would it match up... had they changed it thus ruining all the things I had loved about it?

We wandered around from store to store and finally, after months of patting romaine half-heartedly dry with paper toweling, found a near duplicate here on Amazon.

Her lid is still clear (and comes apart for easy washing), her spinner spins beautifully and gracefully, her brake BRAKES! Oh does it brake! The bowl design works wonderfully for rinsing other veggies (though the temptation to spin some veggies should be quelled!) making it indispensable once again in my kitchen. Though I must admit, I guard her a bit more jealously now and am considering buying a second (and third... one just never knows!).

Some tools should not be allowed in the kitchen... ever. Or at least not next to the Zyliss!!

In summation: Get one!

UPDATE 11/2019: My review is for the older Zyliss model. Clear blue bowl and lid, white spinning mechanism and WHITE oval spinning handle. If I purchase the redesign I will update review.

Shed
1.0 颗星，最多 5 颗星 Flawed spinner
2017年9月2日 - 已在美国亚马逊上发表
尺寸: Large颜色: 绿色/白色已确认购买
We had an older version of this guy for 5+ years and it spun a million salads. When it finally gave out, we decided to stay on board with Zyliss since the last one was so good.

The design on this one is different than our previous one. The string completely pulled out after only a few weeks. Prior to the string pulling out it had routed out a channel in the plastic body of the spinner so it seems like this newer design is flawed.

Went to a different brand which I honestly do not like as much as our old one. I wish they had stayed with the old design as it was a well made product.
阅读更多
31 个人发现此评论有用

Helen B. Hoock
1.0 颗星，最多 5 颗星 Redesigned model does not work...
2019年4月2日 - 已在美国亚马逊上发表
尺寸: Large颜色: 绿色/白色已确认购买
Very disappointed with this spinner. I used an older model made by this company for many years, until the string pull actually wore out. I ordered this one on the basis of previous success with this company's spinner. Complaints with this new model...it does not spin out the water as the older one did and the addition of a fourth part and changed design does not work. i.e. the top cover does not stay on when spinning (not enough lip to hold together.) The lettuce remains quite wet after three attempts to spin it dry. If the lettuce is not dried properly, it tends to spoil much faster. WHAT HAPPENED? The older model was MUCH better. The newer one is poorly designed.
阅读更多
14 个人发现此评论有用

Sally M.
1.0 颗星，最多 5 颗星 Not as good as the old version
2018年3月1日 - 已在美国亚马逊上发表
尺寸: Large颜色: 绿色/白色已确认购买
Once again, the "new and improved" version, increased in price, is not nearly as good as the old version. The extra cover is cumbersome to use, and the lettuce is not nearly as dry. The old whiter version was vastly superior - it was easy to use, got the lettuce very dry, and was much better made than the new version. The basket for this new version is flimsy and unlikely to last long. I've had the old white version for twenty or so years, and it worked perfectly with almost daily use until I dropped it and broke the outer bowl. Wish they would ditch this and go back to the old white single cover version.
阅读更多
17 个人发现此评论有用
加入亚马逊Prime，从此免运费
亚马逊Prime会员可享海外购美/英/日/德跨境免邮，全年无限次！更有免费无限次阅读电子书服务
> 立即加入
了解我们
合作信息
支付方式
帮助中心和购物指南