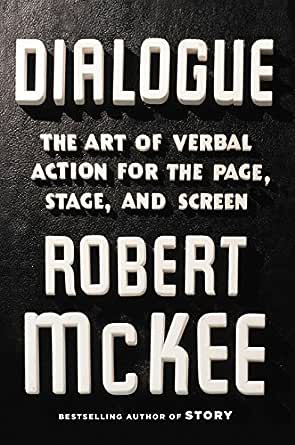 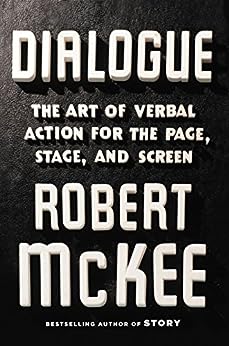 McKee teaches what is not yet taught. He shines his unwavering analytical light on the structure and invisible substructure of dialogue. He takes a craft that is often considered instinctual or magical and reveals its chemical secrets.-- "Terry Johnson, writer/director, winner of the Olivier Award, Critics' Circle Theater Award, WGA, and BAFTA"

McKee's DIALOGUE is a mother lode of insight and inspiration for any writer. His teachings have changed my career and changed my life. Robert McKee is in a category of one.-- "Steven Pressfield, bestselling author of The Legend of Baggar Vance, The War of Art, and Gates of Fire"

DIALOGUE is a masterwork. There's nothing harder to teach. Now this book exists. McKee has written an essential book akin to The Elements of Style for all writers.-- "Margaret Nagle, winner of the Writer's Guild Award, Emmy, NAACP, Golden Globe, and Pen"

I used to think great dialogue couldn't be taught. You either had an ear for it or you didn't. That was before I read McKee's DIALOGUE. He's a wizard at explaining the unexplainable.-- "Sarah Treem, writer/producer, co-creator and showrunner of Golden Globe-winning TV Series The Affair, winner of the Writers Guild of America Award and Emmy Award nominee"

An essential purchase destined to be replaced over the years as generations of aspiring writers wear out the copies with extensive study.-- "Library Journal (Starred Review)"

Bob McKee's approach to writing dialogue, as with every other aspect of storytelling he has taught, reflects his great breadth of experience and mastery of his craft. Clear, precise, ad rich in insight, it will prove indispensable to both the aspiring writer and the seasoned professional.-- "Patrick McGrath, author of Asylum and Spider"

Robert McKee teaches his Story seminar to sold-out auditoriums in Los Angeles, New York, London, and film capitals throughout the world. A Fulbright Scholar, this award-winning film and television writer has also served as project and talent development consultant to major production companies such as TriStar and Golden Harvest Films. He lives in Los Angeles and Cornwall, England.

Bookworm
5.0 颗星，最多 5 颗星 It's All Right Here. All of it.
2016年9月21日 - 已在美国亚马逊上发表
已确认购买
I shouldn't even be writing this review because doing so only creates my competition. I'm writing it for Robert McKee out of respect and love for him as one of the best instructors I've never met. I have both STORY and now, DIALOGUE in hardcover, on my Kindle, and the audio version (he narrates his books) in my headphones. I read it, I listen to it and take it with me when I travel. Sometimes I listen and read at the same time. Most nights I listen to the audio version in my sleep. In other words, I eat, sleep and breathe this book. I did the same thing with Story, his other book. I may go to my grave never fully comprehending the vast wealth of knowledge contained in these two books. That's OK. What I can tell you is this. With nothing but STORY as my guide, my very first screenplay took seven months and thirty-five drafts from start to finish. But. That screenplay became a Hallmark Movies and Mysteries feature film. The producers liked it so much they gave me another assignment. That one took six weeks, and they bought the first draft. I'm now working on my fifth script; this one is in the six-figure category, with five figures upfront just for the Treatment. And I owe it all to everything I've learned from studying Robert McKee, supplemented by what I learned from everyone else. Over the past thirty years, I’ve studied with forty plus instructors and highlighted hundreds of books and listened to dozens of recorded seminars. All that information is summed up and thoroughly explained in Robert McKee's two books STORY and now DIALOGUE. I won't live long enough to absorb everything he teaches. And I still study two hours a day as a warm up for my writing. I’d recommend Aaron Sorkin, Warner Hertzog, William Goldman (both Sorkin and McKee say he's the greatest), Blake Synder, Chris Vogler, Michael Hauge, William Akers, and anybody else you can find who’s willing to share their knowledge. Because you never know when a concept you didn’t realize you didn’t understand or needed is going to show up. Especially when presented from a different perspective. Having said that, if you are serious, and I mean dead serious, about becoming a working screenwriter, or any other kind of fiction writer for that matter, then you have no choice but to study McKee like your literary life depends on it. Buy the hardcover, buy the Kindle version, and buy the audio version of DIALOGUE and STORY. And supplement these two works with any other material that speaks to you. If you do this, you will become a first class screenwriter or novelist or playwright, because all three genres are only different ways of presenting a Story. If you can’t commit to this, unless you’re a genius or prodigy, you’re wasting valuable time which could be spent following your true life calling. But if your heart’s desire is to become a working writer, then sooner or later you’ll have to know everything in McKee’s two books. So, you might as well bite the bullet and jump in head first. It's all right here in STORY and DIALOGUE. All of it. Thank you, Mr. McKee. You, sir, changed my life.-- Jimmy Hager
阅读更多
137 个人发现此评论有用

cf otto
5.0 颗星，最多 5 颗星 ONE OF THE TWO BEST BOOKS ON SCREENWRITING
2016年10月15日 - 已在美国亚马逊上发表
已确认购买
Probably the best book on screenwriting ever (besides Egri), though there is also much here for the novelist and playwright. I am a professional TV writer, of long-standing (35 years), and I can tell you I used this book to figure out how to fix the problems of a complex pilot I'm writing; the author truly " guided me home." And lest you think I'm a McKee sycophant, I am not. I found little in STORY for me. The only thing I disagree with in DIALOGUE is that the author sells his own work short: it isn't just for those who are "lost" in their writing, like me, and the student, it's for anyone who writes fiction for a living, in any form, no matter how much experience they have. It's that good.
阅读更多
31 个人发现此评论有用

Lori T. Sly
4.0 颗星，最多 5 颗星 Helpful, but not as good as "Story" by same author, and it disses certain genres
2019年12月12日 - 已在美国亚马逊上发表
已确认购买
This book contains a lot of helpful information on how to write dialogue. It's dense with dialogue analysis and insights, tough to take in by just reading it through once. But it is helpful.

McKee covers the three dialogue tiers (said, unsaid, unsayable) as well as how dialogue ties into story turning points and scene conflict type. I still have lots of practice ahead of me to figure out how best to do this in my story. I will definitely use his advice as a guide. He understands dialogue at a much deeper level than I do.

However, many of McKee's dialogue examples did not speak to me. While I liked reading the dialogue examples for Breaking Bad, 30 Rock, The Sopranos, Frasier, A Raisin in the Sun, and The Great Gatsby, and agreed they were good, I disliked the dialogue from Shakespeare, Elmore Leonard, Sideways, Fraulein Else, and Lost in Translation. McKee says fine dialogue turns the reader/audience into a mind reader; I guess I'm not interested in movies which expect me to be as much of a mind reader as those latter examples did. I totally missed the subtext of the dialogue in those until he explained it to me as an aside. And that's after I already saw most of those movies!

If I have to guess what every character means with every line, that's too much work and too little entertainment for me. Maybe mystery lovers liked the dialogue in "Lost in Translation"; I'm not a mystery lover. McKee quoted one novelist as saying that the crux of good writing is to, "Make em laugh, make em cry, make em wait." Lost In Translation and its dialogue did none of that for me. The subtext was so confusing and subtle that I lost interest in the movie. I can't even remember what it was about anymore, only that it won some award and I had no clue why.

McKee says that with rare exceptions, a scene should never be outwardly and entirely about what it seems to be about. Dialogue should imply, not explain, its subtext. An ever-present subtext is the guiding principle of realism.
Nonrealism, on the other hand, employs on-the-nose dialogue in all its genres and subgenres: myth and fairytale, science fiction and time travel, animation, the musical, the supernatural, Theatre of the Absurd, action/adventure, farce, horror, allegory, magical realism, postmodernism, dieselpunk retrofuturism, and the like. It's a bit unclear how, if at all, anyone writing in any of these "nonreal" genres should take his dialogue advice. It seems to me that even sci fi scenes need some good dialogue with subtext to be engaging.

With McKee, all the accolades go to what is implied and unsaid over what is said. I agree that subtext matters, but for me, he's out of proportion with how much it matters to most people and how hard audiences are willing to work to discover the intended subtext. Also, memorable spoken character lines can elevate movie themes and characterization like nothing else.

In the end, I think this book is geared more toward writers who want other advanced writers as their audience rather than the average reader or movie watcher. And McKee admits it is definitely not geared toward sci fi, fairytales/myths, action/adventure, horror or allegory. It's almost as if he's saying those genres can't have excellent dialogue. I disagree.

But it was still a helpful book to read, and one I will be thinking about and trying to more fully understand for a long time. McKee understands how character's subconscious drives can deepen what they say or avoid saying, and how dialogue interacts with many other aspects of a story to make it all work together.
阅读更多
6 个人发现此评论有用

Christopher B. Derrick
4.0 颗星，最多 5 颗星 A Crucial Book
2019年5月15日 - 已在美国亚马逊上发表
已确认购买
Many people in the screenwriting trade have it in for Robert McKee, and there's a camp that loves him; and that's all based off his tome STORY. It has it's pluses and it's minuses.

However, this book on DIALOGUE, is more specific, and yet, I don't know too many people who talk about. Sure, you can't "teach" an ear for dialogue (although, McKee provides some exercises that can help elevate that part of the craft), but there are several scene break-downs throughout this book that peel back some of the esoterics about what to aim for in the subtext, which can be helpful.
阅读更多
5 个人发现此评论有用
加入亚马逊Prime，从此免运费
亚马逊Prime会员可享海外购美/英/日/德跨境免邮，全年无限次！更有免费无限次阅读电子书服务
> 立即加入
了解我们
合作信息
帮助中心和购物指南