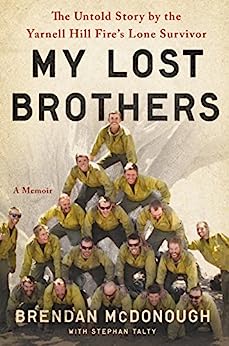 Granite Mountain: The First-Hand Account of a Tragic Wildfire, Its Lone Survivor, and the Firefighters Who Made the Ultimate Sacrifice (English Edition) Kindle电子书

A "unique and bracing" (Booklist) first-person account by the sole survivor of Arizona's disastrous 2013 Yarnell Hill Fire, which took the lives of 19 "hotshots" -- firefighters trained specifically to battle wildfires.

Brendan McDonough was on the verge of becoming a hopeless, inveterate heroin addict when he, for the sake of his young daughter, decided to turn his life around. He enlisted in the Granite Mountain Hotshots, a team of elite firefighters based in Prescott, Arizona. Their leader, Eric Marsh, was in a desperate crunch after four hotshots left the unit, and perhaps seeing a glimmer of promise in the skinny would-be recruit, he took a chance on the unlikely McDonough, and the chance paid off. Despite the crew's skepticism, and thanks in large part to Marsh's firm but loving encouragement, McDonough unlocked a latent drive and dedication, going on to successfully battle a number of blazes and eventually win the confidence of the men he came to call his brothers.

Then, on June 30, 2013, while McDonough -- "Donut" as he'd been dubbed by his team--served as lookout, they confronted a freak, 3,000-degree inferno in nearby Yarnell, Arizona. The relentless firestorm ultimately trapped his hotshot brothers, tragically killing all 19 of them within minutes. Nationwide, it was the greatest loss of firefighter lives since the 9/11 attacks.

Granite Mountain is a gripping memoir that traces McDonough's story of finding his way out of the dead end of drugs, finding his purpose among the Granite Mountain Hotshots, and the minute-by-minute account of the fateful day he lost the very men who had saved him. A harrowing and redemptive tale of resilience in the face of tragedy, Granite Mountain is also a powerful reminder of the heroism of the people who put themselves in harm's way to protect us every day.
阅读更多
›  查看更多商品促销信息

"[Granite Mountain]is a harrowing story of heroism in the face of natural disaster. It perfectly illustrates the kind of teamwork and camaraderie that informed the legendary squad of hotshots working to save--in this case--their hometown from utter destruction by fire. As perhaps the least likely guy ever to become a hotshot, Brendan McDonough more than lives up to his role after having been taken underwing by Granite Mountain leader Eric Marsh. That he has been able to keep on even keel as the Yarnell Hill Fire's lone survivor, having lost his mentor and his best friends, speaks volumes about his character and is a lasting testimony to the strength of his lost brothers."--Ed Viesturs, bestselling author of The Mountain: My Time on Everest

"Gear up with Brendan McDonough and his brothers in the elite Granite Mountain crew of wildland firefighters. Suspenseful and intense,
[Granite Mountain] sears to the heart. Nonfiction writing at its best."--Stephen Templin, New York Times-bestselling author of SEAL Team Six and Trident's First Gleaming

"For an East Coast guy like me this book was a real education in wildfires, and the last few chapters were a terrifying lesson in how they can do the unpredictable. I was left with nothing but admiration for the Granite Mountain hotshot crew who put their lives on the line to protect the town of Yarnell."--Michael Tougias, New York Times-bestselling co-author of The Finest Hours and So Close to Home

"This is a new breed of war story, of the citizen soldiers who stand between life and death, the forest and the fire. Through burnt moonscapes, in air choked with ash, they face flames as tall as towers and say, 'You shall not pass.' Powerful and lasting, this is a story of men who gave their all."--Adam Makos, New York Times-bestselling author of A Higher Call

"With his insightful barbs aimed at our increasingly unrealistic ideal of life in the West and the many ways in which wildland firefighters are let down by those who fund and rely upon them, and brutally honest assessment of his struggles with PTSD, McDonough gives readers a unique and bracing literary experience.--Booklist

"The dangers of battling fires on the ground and air are many and McDonough thrillingly explains the terror and panic of the fateful June 30, 2013 tragedy at Yarnell Hill, where all 19 of his crew members perished, leaving him with painful survivor's guilt. But strong support propelled him into a new life of grace and renewal."--Publishers Weekly

"[Granite Mountain] is sure to captivate readers . . . Brendan McDonough had a very unusual story to tell, and he has done it well."--Bookreporter.com

McDonough's gut-wrenching survival story, written with the expert assistance of best-selling Talty (Escape from the Land of Snows, 2011) possesses a searing degree of emotion. With his insightful barbs aimed at our increasingly unrealistic ideal of life in the West and the many ways in which wildland firefighters are let down by those who fund and rely upon them, and brutally honest assessment of his struggles with PTSD, McDonough gives readers a unique and bracing literary experience.--Booklist --此文字指其他 kindle_edition 版本。

Brendan McDonough is the only survivor of the 2013 fire at Yarnell and is involved in numerous non-profits including Carry the Load. He lives in Prescott, Arizona. --此文字指其他 kindle_edition 版本。

J. Reaves
5.0 颗星，最多 5 颗星 Breathtaking
2017年9月13日 - 已在美国亚马逊上发表
已确认购买
As a firefighter, both wildland and structural, this book is both an imperative read and one of the most difficult things I have ever read. After reading this work I am humbled now more than ever to be part of such an awesome career. The writing hits close to home as I think how easily and how quickly this could be me or any one of the men and women I proudly call my brothers and sisters. To see how strong Brendan has been, his willingness to serve others, and his desire to improve the world we live in; for his daughter and for firefighters, is inspiring.

Brendan- in the unlikely event you ever read this blurb Thank you for writing this work. You have changed the way I look at the job and the things we face. I am honored to be even loosely associated to men of your caliber. Rest assured that you have helped at least one firefighter!
阅读更多
34 个人发现此评论有用

Jessie's Book Blog
5.0 颗星，最多 5 颗星 Eye Opening and Real
2017年12月4日 - 已在美国亚马逊上发表
已确认购买
This book was a real eye opener for me. I read it after seeing "Only the Brave" and while it was a good movie, this book really gave out more facts and information about the crew of the Granite Mountain Hotshots. I could feel the bravery and camaraderie among the guys who went into danger every day to help save towns and wilderness from fire.

One thing that got me really choked up is when Brendan talks about the Little Bear fire in Ruidoso, New Mexico. That fire hit home for me because it's close to where I am and burned up the campground and lake where we used to frequent when we'd go camping. I didn't know that Granite Mountain was at that fire.

A story of courage, bravery, and the 19 men who sacrificed all for people they didn't know. I commend Brendan McDonough for sharing this with us. It had to take some deep courage of his own to be able to sit and write it all out. I'm glad he has used his situation for the better and has become an author and inspiration speaker, rather than what he talks about he was capable of doing in the book.

Hat tip to every kind of firefighter out there. Thank you for what you do!
阅读更多
17 个人发现此评论有用

Jeff
4.0 颗星，最多 5 颗星 a tragic story
2019年5月25日 - 已在美国亚马逊上发表
已确认购买
Nineteen firefighters were killed in the 2013 Yarnell, Arizona fire, making it America’s most tragic wildfire in the terms of death of firefighters. Yarnell surpasses the King Mountain, Colorado fire in 1994 and the Mann Gulch, Montana fire in 1948. Everyone who lives in the American West, especially in non-urban areas, know the danger of wildfires and this fire hit a little too close to home for our family. One of the firefighters killed that June afternoon had, in the mid-1990s, been a member of a youth group at the church I served in Cedar City, Utah. He left behind a wife and two children. I read this book with Joe in mind.

This book is more about the author, Brendan McDonough, than it is about the fire or even firefighting. While he does covers what happens that afternoon, the whole story is seen through Brendan’s eyes. It is a story of redemption as Brendan goes from being a drug dealer and user to a member of an elite fire-fighting team. He is to be commended for having turned his life around and one can easily understand how he was so distraught after losing his “family” in the fire.

On the afternoon of the fire, Brendan was station as the team’s lookout. When the fire blew up, his escape route was different than that of the crew who were working below him in an area filled with bushy vegetation. For some reason, the Granite Hotspots didn’t take the escape route they’d planned. It was a fatal mistake. They were caught in a canyon filled with shrub. With the fire pushing in on them, they attempted to clear away shrubs and to crawl into their safety blankets in the hope the fire would burn pass them. They all died.

I was disappointed that I didn’t learn anything about the kid I once knew. Brendan only discusses a handful of the fellow firefighters who were a part of the Granite Hot Shot team. I would have also learned more about what investigators have discovered about the fire, but this is a personal story. The book does not cover the investigation that followed the incident. However, the story from Brendan’s eyes is well told and the book is easy to read.
阅读更多
5 个人发现此评论有用

rockhound
5.0 颗星，最多 5 颗星 Humbling and prophetic read
2017年12月28日 - 已在美国亚马逊上发表
已确认购买
I recently lost my home possessions to the Thomas Fire in Ventura. Growing up in California and Montana, wildfires are as regular as the seasons and you can begin to become cavalier and jaded about the dangers and risks that these fires cause for those in the line of fire. While I watched my things burn on a local news station, I saw a crew of hotshots from Arizona drive by the hotel and I thought, "please don't bother...It's just stuff". I remembered the crew from Granite Mountain and I remembered the authors face from a news story. I decided to Google him and found this book. This book is a legacy. This book should be read by anyone living in a wild/urban interface and should be handed to anyone who fails to evaluate their property and maintain adequate clearance. These guys sign up for this...but that shouldn't relegate our responsibility to protect them by doing the basics. Brendan seems to have wrote this from a place of love for those lost and a place of frustration for the lack of dynamic, and sorely needed, evaluation of antiquated equipment and policy.
阅读更多
11 个人发现此评论有用