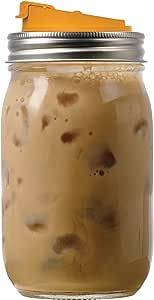 颜色: Drink Lid | 尺寸: 237 ml
技术细节
更多信息
我来补充
Would you like to tell us about a lower price?
买家问题和答案
查看问题和答案

Amazon Customer
5.0 颗星，最多 5 颗星 This SNAPS on, not SCREWS on, and it says that in the instructions.
2017年4月25日 - 已在美国亚马逊上发表
颜色: Drink Lid尺寸: 237 ml已确认购买
I'm repeating what other people have said, but it needs to be done to even out these unnecessarily bad reviews! Everyone that has given this item one star and says it doesn't fit and it leaks did not read the instructions, which were extremely minimal. This SNAPS into the metal ring before you screw the ring onto the jar. This is an additional pro, because then you're not dealing with two different pieces when taking the lid on and off, which you would for a standard ball jar lid, or with some other mason jar accessories I have tried. I bought just one of these to try, and I am extremely pleased with it. Before I wrote this, I filled a jar with water with the top on, and shook it over my sink to make sure I was going to give an accurate review. It did not leak. The top did not unhinge. I can fit a regular-sized straw through the drink hole (which is slightly bigger than the hole in a to-go coffee cup lid), and I also poured the liquid out of the drink hole, and it did not dribble all down the side. I did not expect it to not dribble; that was an added bonus. I will definitely be buying more of these.
阅读更多
192 个人发现此评论有用

M
3.0 颗星，最多 5 颗星 Cons outweigh the pros
2018年7月5日 - 已在美国亚马逊上发表
颜色: Drink Lid尺寸: 237 ml已确认购买
I REALLY love the idea of this cap. I get so many compliments at work on it, and I use mason jars to drink out of for many reasons... but this didn’t really pan out.

Pros:
-It is a lid that you can drink from.
-It’s pretty sturdy, after being tossed in the dishwasher, dropped on the floor, and just general wear and tear for weeks, it’s still in one piece.

Cons:
-It doesn’t come with the metal part to seal it with, you gotta use your own, which maybe isn’t a con, but slightly inconvenient.
-The metal band just sort of holds it there, the lid never quite sealed properly or locked into place.
-Because it never locked, I found signs of rust on the metal band I used to hold it.
-It also wasn’t sealing properly so it leaked on me, many times, which was generally not cool.
-There is a tiny hole at the top and when you tilt the jar to drink it, if it’s too full, it makes a high pitched whistling as if you were drinking from a little orange bird.

So there you go. If none of that bothers you, go for it. Or maybe I’m a complete fool who doesn’t know how to use a lid. The world may never know.

KL Nga
5.0 颗星，最多 5 颗星 Make sure it "clicks" in
2019年10月29日 - 已在美国亚马逊上发表
颜色: Drink Lid尺寸: 237 ml已确认购买
I wanted to use this to store and pour some homemade creamer. When I first tried it, I could not get the lid to screw on the mason jar. It kept popping up. I tried different lids and got the same results. I finally had to ask my husband to help me and he got the same results. Suddenly, in one last attempt, we heard a click. We figured out that this orange lid had to be pushed in hard to click into the lid. Once that happened, I could screw the lid on properly, and it works great! Just what I wanted.
阅读更多
4 个人发现此评论有用
加入亚马逊Prime，从此免运费
亚马逊Prime会员可享海外购美/英/日/德跨境免邮，全年无限次！更有免费无限次阅读电子书服务
> 立即加入