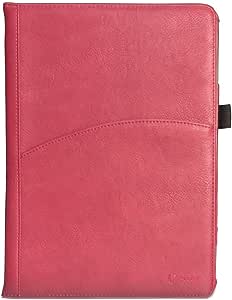 技术细节
更多信息
我来补充
Would you like to tell us about a lower price?

Included Magnetic Clip & Stylus Holder---Allows for quick fastening and access without any hassle.Including a smart stylus loop in the right side for holding stylus pen for you conveniently! (Package Does Not contain a Stylus)

Smart Card Slot---You could store your credit card etc in the Card Slot on the case cover.

Remindly Note: The color of cases may slightly vary from image for different resolution ratio of each monitor, please refer to the item you receive actually.

F-color promises that we aims to offer premium products as well as friendly and prompt customer service for you!

Mr max
1.0 颗星，最多 5 颗星 This case does not wake/sleep tablet, and power button WILL NOT WORK with tablet in the case.
2017年8月9日 - 已在美国亚马逊上发表
已确认购买
I bought this case in the ipad mini 1/2/3 version for an original ipad mini given to me. It really has a good feel in my hand, unlike any other case I've had with any of my other devices. I liked the ipad so much I purchased an ipad mini 4, and liked the case so much I bought this one for my new ipad mini 4. However ... there is a major problem with this ipad mini 4 case that was not present in the case for older ipad minis. (Read down for why it only gets two stars)

This is not a slim tablet, it more than triples the thickness of the ipad mini 4, so if you want something sleek and slim to go with the design of the tablet, this is not the case you want. However, for me, the tablet itself is too thin to hold comfortably, so the increased thickness in a soft cover like this works very well. The purple color is lovely, and very close to the representation on my screens. It also has a front pocket wide enough for notes, etc. The fit is good.

Unfortunately, there is an issue with this case, that for many people will be a deal-breaker. The issue is so major I had to deduct four stars for it. The case is supposed to turn the tablet on and off, and it does not (the other version does). Not only that, but when in the case, the power button on the top doesn't work either. There is NO WAY to put the tablet to sleep (or turn it off!) unless you pull the tablet OUT of the case. Which largely negates the whole purpose of a case. It's really too bad, with such a wonderful case, that it doesn't function properly.

Kim Loewenstein
2.0 颗星，最多 5 颗星 Not as I expected.
2017年12月8日 - 已在美国亚马逊上发表
已确认购买
Not really happy with this. I like the design and all but I think it may needed to be a hair bigger. The bottom part of the case covers the home button a little so it’s harder To press the button. And the left side of the case covers a small portion of the screen. I purchased this for my new iPad Mini 4 so it should fit perfect but it doesn’t.
阅读更多

Niel
3.0 颗星，最多 5 颗星 Weak magnets but looks and feels good otherwise.
2017年3月15日 - 已在美国亚马逊上发表
已确认购买
Perfect cutouts. leather feels good, man. Had to knock off a star or two because the magnets are too weak to hold the case closed. The screen turns off most of the time, but not always. If it had a set of stronger magnets in the front flap to hold it closed, then it'd get 5 stars.
阅读更多

Stanley Bodzin
5.0 颗星，最多 5 颗星 Second time around
2016年12月16日 - 已在美国亚马逊上发表
已确认购买
Bought one for my iPad air2 and liked it so much I bought one for my wife's iPad mini 4. Great product and certainly worth the price
阅读更多