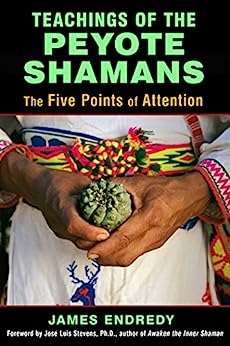 Teachings of the Peyote Shamans: The Five Points of Attention (English Edition) Kindle电子书

• Explains how the Huichol teachings of awareness, centered on the five points of attention, connect you to your true essence

Taking place in the heart of the Huichol homeland in western Mexico, this book offers a rare in-depth look at the inner workings of Huichol shamanism, which is permeated with the use of the sacred peyote cactus. Outsiders are almost never allowed access to Huichol sacred sites and ceremonies; however, James Endredy, after years of friendship with Huichol families, earned the privilege nearly by accident. Swayed by persistent pleading, he agreed to take another gringo into the mountains to one of the Huichols’ ceremonial centers, and they were both caught. After trial and punishment, Endredy was invited to stay within the sacred lands for the festivities he had illegally intruded upon and found his initiation into the Huichol shamanic tradition had begun.

Endredy undergoes dozens of spiritual journeys with peyote as he makes the pilgrimages to the five sacred Huichol sites with Peyote Jesus. He is shocked by his vision of the Virgin Mary while under peyote’s guidance and learns of the deep relationship--strictly on Huichol terms--between their cosmology, Gnosticism, and Christianity, especially Jesus Christ. Providing an inside look at the major ceremonies and peyote rituals of the Huichol, this unexpectedly powerful book reveals the key tenants of the Huichol worldview, their beliefs in the afterlife, and their spiritual work on behalf of all of humanity.
阅读更多
Previous page
Next page
›  查看更多商品促销信息

The Five Points of Attention

I was sitting alongside Maria outside her little house watching her do her weaving when Jesús appeared and said cryptically that I was being summoned by the ancestors to Teakata. We left immediately.

The hike to the physical center of the Huichol world is not very far from the ceremonial center of Tuapurie; I’d estimate three to four miles. But around Tuapurie are deep gorges with narrow, rocky trails that make walking difficult and strenuous. However, the physical climb was the least of my worries, because the closer we got the more I began to feel ill. Not in my body but in my head. This did not happen to me the first and only other time I had been there. On that occasion I was visiting the community of Pochotita at the time the
kawitéro (spiritual elder) was taking the people to Teakata to change the roofs of the many little rirrikis (family shrines) of the ancestors. Teakata, from what I know as a tewari (non-Huichol, non-Mexican white guy), comprises caves and shrines of the most important ancestors, including Tatewari, Nakawe, and Maxakwaxi.

As I gazed into the gorge containing the most sacred place of the Huichol, I felt like turning around and running away as fast as I could. Jesús noticed this and firmly grabbed my arm and asked me what was wrong. I told him I didn’t know but that I didn’t want to go to Teakata.

“You have become much more sensitive since the last time you were here,” he said in a concerned voice. “This is probably why we were summoned here. I believe it is time for you to have a very big lesson.”

Jesús led me a short distance away and we sat on the ground of the mesa above Teakata, where he began a formal instruction. He started by telling me that now that I was more sensitive to the powers of the ancestors I needed to know how to handle myself correctly. According to Jesús, Teakata--the center of the five sacred points of the Huichol universe--was the perfect place to begin my instruction.

“To touch the spark of god within you, you must start by nurturing your true being, your esencia (essence). You see, you have three important parts that make up ‘yourself.’ You have your inflated ego--I am this and I am that. You have your essence--this is your true being that you were born with. And you also have your personality--the acquired characteristics of James. Aside from your physical body and eternal soul, in this life you are basically your ego, your essence, and your personality. Your ego is the trickiest subject, but we cannot work on fixing it until we learn about essence. We have to work on our true being.

“Pay attention to this. We are born with our true being, our essence, which grows within us during early childhood. But modern man, industrial man, their essence ceases to grow after age 3 to 5 because the ego and personality are the ones nurtured by parents, school, job, relationships, and so on. The essence has no place in the busy lives of modern people so it becomes stagnant and malnourished. I have seen that for people like you--Americans, Mexicans, Europeans, and other cultures that follow similar ways of life--there are usually only two stages of growth in life: growth of the essence as little children and then growth of the ego and personality until death.

“Do you know why you come to the Huichol to learn? It is because our culture not only allows but encourages the essence to grow equally with the ego and personality. You can feel that clearly when you are with us. Even though we don’t have the level of intellectual knowledge of the dominant culture, our culture and people are in many ways much more mature because we have nurtured our essence throughout our lives. For you and for people of your culture, your continued growth as human beings will be the growth of your essence, which has been left behind.”

“So you’re saying that my essence doesn’t grow naturally as I get older, wiser?”

“Older, no. Wiser, maybe. That depends on what you call wise. Inner wisdom of one’s true self--yes. Knowledge as in books, computers, jobs like carpentry, banking, office work--no. You see, time is no factor. I know teenagers in the Sierra who know their essence more than any seventy-year-old man I know living in the city. What I am saying is the quality of life is much different. You and I both have what can be called ‘book knowledge.’ You probably have a lot more than me. But as much as we can know about words and mathematics and science and philosophy and even the Bible, all of this, except for what we are truly gifted at, has nothing to do with our essence.

“Man was born with two legs and feet for a reason. To walk! To explore the mysteries and beauty of nature. And our essence is tied to that which gives us life--sun, water, wind, fire, earth. Our essence is also what lives inherently inside each of us, which should be nurtured. Our specific gifts and talents. Our essence is also our inner quality, our level of being, our innermost values. But most of all our essence asks us to seek the largest questions of the human being: What is the meaning of my life? Who am I? Where did I come from? Where am I going? When people live centered on the ego and the personality and the intellect, at the expense of the essence, they are in disharmony just as someone who has developed their essence with no thought to personality, like someone trapped alone on an island their whole life. Harmony between essence, personality, and ego opens the door to true self-knowledge and the light of the divine.” --此文字指其他 kindle_edition 版本。

“James is a wonderful storyteller who takes us into an altered state of consciousness as he shares teaching stories from his journeys. You will learn about the history, culture, ancient shamanic spirituality, and wisdom-ways of a people who have much to share with Westerners about what living meaningful lives in a time of challenge and transition looks like. It is an adventure story that will carry you along a river of learning into new realms of thinking, of being, and of exploring who and what we really are. . . . It just takes cleaning the lens of perception to see and know the deeper dimensions of reality. James and his teachers have been there. Now you can glimpse it as well.” (Tom Pinkson, Ph.D., author of The Shamanic Wisdom of the Huichol: Medicine Teachings for Modern Time)

“An honest, true-life story of spiritual exploration and humble learning. Endredy weaves together years of travel and personal initiation into a tale that introduces an often controversial topic with wisdom. Readers will come away with a better idea of the investment of time and cultural sensitivity needed to meet this plant ally on its home territory.” (Lupa, author of Nature Spirituality from the Ground Up: Connect with Totems in Your Ecosystem)

“Beautifully written and engaging, Endredy’s tale recounts a ‘spiritual rescue mission’ to save the sacred peyote from those who seek to steal and/or exploit the Huichol’s most revered instrument for connecting with the cosmos. Unlike many books of the spiritual memoir genre, this story possesses a humanistic vividness and value that often gets lost in overly rarified accounts of journeys into non-Western realities.” (Hillary S. Webb, Ph.D., author of Traveling between the Worlds: Conversations with Contemporary Sham)

“The world of shamanism is magic and psychopomp, secretive and healing. It is reserved for the indigenous peoples of faraway lands. James Endredy is a singular exception because I have seen the medicinal power he wields from his time with the Huichol. This story is something only a few have experienced and it is told in James’s masterful yet honest manner. This is a book of personal transformation for the reader, so read on and witness the spirituality we cannot see with our eyes.” (Shawn A. Tassone, M.D., author of Spiritual Pregnancy)

“I recommend this book as a smooth ride into the world of the indigenous Huichol people of Mexico. The author gives rare insight into the everyday life of these people, their art, and religion.” (New Dawn, Jennifer Hoskins, May 2016) --此文字指其他 kindle_edition 版本。

Center of the Universe

The Gnosis of Jesús

The Five Points of Attention

James Endredy leads workshops throughout the United States, Mexico, and Canada and is actively involved in preserving the world’s indigenous cultures and sacred sites. For more than 25 years he has learned shamanic practices from all over the globe and has lived with the Huichol of Mexico for years at a time. The award-winning author of several books, including Ecoshamanism, Lightning in My Blood, and Earthwalks for Body and Spirit, he lives in Lake Tahoe, California. --此文字指其他 kindle_edition 版本。
阅读更多

D K
5.0 颗星，最多 5 颗星 Really fascinating
2018年2月3日 - 已在美国亚马逊上发表
已确认购买
Haven't finished it, but it is well written and tells about the real word of shamanism as opposed to Casteneda's new age fantasy type stuff. Much detail of Huichol culture and a very personal story. Really fascinating, I look forward to contiuing...
阅读更多
3 个人发现此评论有用

Roman Be
5.0 颗星，最多 5 颗星 Castaneda for the 21st Century
2016年4月22日 - 已在美国亚马逊上发表
More than merely a book, Teachings of the Peyote Shamans is an experience.

James Endredy takes the reader on a pilgrimage of discovery, unearthing a realm within one's Self, which is an extension of the Cosmos from which all life and Existence springs...

Anecdotal references are one level of education... The sharing and communicating of first hand accounts are another... Here the author invites the reader into a world of contemplation, and an experience of examination...

Look beyond [and through] everyday habituated perception, and encounter a current of energy that flows like a mighty river within the life-force of every Being...
阅读更多
4 个人发现此评论有用