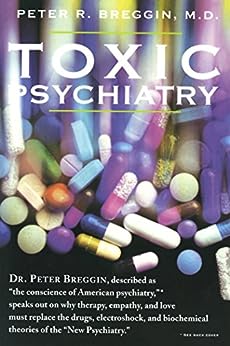 Toxic Psychiatry: Why Therapy, Empathy and Love Must Replace the Drugs, Electroshock, and Biochemical Theories of the "New Psychiatry" (English Edition) Kindle电子书

Prozac, Xanax, Halcion, Haldol, Lithium. These psychiatric drugs--and dozens of other short-term "solutions"--are being prescribed by doctors across the country as a quick antidote to depression, panic disorder, obsessive-compulsive disorder, and other psychiatric problems. But at what cost?

In this searing, myth-shattering exposé, psychiatrist Peter R. Breggin, M.D., breaks through the hype and false promises surrounding the "New Psychiatry" and shows how dangerous, even potentially brain-damaging, many of its drugs and treatments are. He asserts that: psychiatric drugs are spreading an epidemic of long-term brain damage; mental "illnesses" like schizophrenia, depression, and anxiety disorder have never been proven to be genetic or even physical in origin, but are under the jurisdiction of medical doctors; millions of schoolchildren, housewives, elderly people, and others are labeled with medical diagnoses and treated with authoritarian interventions, rather than being patiently listened to, understood, and helped.

Toxic Psychiatry sounds a passionate, much-needed wake-up call for everyone who plays a part, active or passive, in America's ever-increasing dependence on harmful psychiatric drugs.

Wendy Corder
5.0 颗星，最多 5 颗星 Some you or your loved onesife depends on it
2018年11月10日 - 已在美国亚马逊上发表
已确认购买
If u are reading this you better read PETER Breggin MD SITS on the board of psychiatry and harvard graduate teachet and private practice its the truth about our young people and overall destroying them with dangerous drugs permanent brain damage life long battle of dehumanizing with psych med and all antidepressants benzodiazepines mood stabilizers abrupt withdrawals READ READ READ
阅读更多
12 个人发现此评论有用

Joy L Frizzell
5.0 颗星，最多 5 颗星 Recommend read for personal problems
2018年7月20日 - 已在美国亚马逊上发表
已确认购买
I believe this author is right on and to the point. I would HIGHLY RECOMMEND this book before making any decisions with someone who has some personal problems.
阅读更多
14 个人发现此评论有用

Michael J. Nucci
5.0 颗星，最多 5 颗星 must read for everyone
2015年8月10日 - 已在美国亚马逊上发表
已确认购买
This is a fantastic book that blows the lid off of what became a toxic takeover of the psychiatric profession by the drug companies. It shows how safe and effective treatments were gradually replaced by a modern day witchcraft and necromancy through narcotics. Peter R. Breggin takes the reader through his own personal experience viewing the degrading and dehumanizing treatment that came along with the medicalization of psychiatry.
Anyone who knows someone dealing with a mental illness should read this book to be better informed about what kind of treatment options exist outside of drugging.