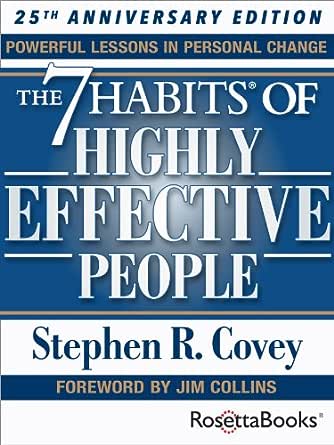 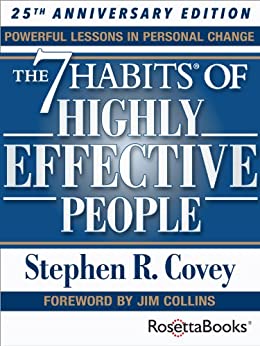 Ken M. Radziwanowski AT&T School of Business Picture someone going through the best experience they've ever had in terms of training -- that's what they say. People credit The 7 Habits with changing their lives, with getting back on track personally and professionally. --此文字指其他 kindle_edition 版本。

Recognized as one of Time magazine's 25 most influential Americans, Stephen R. Covey has dedicated his life to demonstrating how every person can truly control their destiny with profound, yet straightforward guidance. As an internationally respected leadership authority, family expert, teacher, organizational consultant and author, his advice has given insight to millions. He has sold over 20 million books sold (in 38 languages), and The 7 Habits of Highly Effective People was named the No. 1 Most Influential Business Book of the Twentieth Century. His most recent major book, The 8th Habit , has sold nearly 400,000 copies. He holds an MBA from Harvard, and doctorate degree from Brigham Young University. He is the co-founder and vice chairman of FranklinCovey, the leading global professional services firm with offices in 123 countries. He lives with his wife and family in Utah. --此文字指其他 kindle_edition 版本。

There is no real excellence in all this world

which can be separated from right living.

In more than 25 years of working with people in business, university, and marriage and family settings, I have come in contact with many individuals who have achieved an incredible degree of outward success, but have found themselves struggling with an inner hunger, a deep need for personal congruency and effectiveness and for healthy, growing relationships with other people.

I suspect some of the problems they have shared with me may be familiar to you.

I've set and met my career goals and I'm having tremendous professional success. But it's cost me my personal and family life. I don't know my wife and children any more. I'm not even sure I know myself and what's really important to me. I've had to ask myself -- is it worth it?

I've started a new diet -- for the fifth time this year. I know I'm overweight, and I really want to change. I read all the new information, I set goals, I get myself all psyched up with a positive mental attitude and tell myself I can do it. But I don't. After a few weeks, I fizzle. I just can't seem to keep a promise I make to myself.

I've taken course after course on effective management training. I expect a lot out of my employees and I work hard to be friendly toward them and to treat them right. But I don't feel any loyalty from them. I think if I were home sick for a day, they'd spend most of their time gabbing at the water fountain. Why can't I train them to be independent and responsible -- or find employees who can be?

My teenage son is rebellious and on drugs. No matter what I try, he won't listen to me. What can I do?

There's so much to do. And there's never enough time. I feel pressured and hassled all day, every day, seven days a week. I've attended time management seminars and I've tried half a dozen different planning systems. They've helped some, but I still don't feel I'm living the happy, productive, peaceful life I want to live.

I want to teach my children the value of work. But to get them to do anything, I have to supervise every move...and put up with complaining every step of the way. It's so much easier to do it myself. Why can't children do their work cheerfully and without being reminded?

I'm busy -- really busy. But sometimes I wonder if what I'm doing will make any difference in the long run. I'd really like to think there was meaning in my life, that somehow things were different because I was here.

I see my friends or relatives achieve some degree of success or receive some recognition, and I smile and congratulate them enthusiastically. But inside, I'm eating my heart out. Why do I feel this way?

I have a forceful personality. I know, in almost any interaction, I can control the outcome. Most of the time, I can even do it by influencing others to come up with the solution I want. I think through each situation and I really feel the ideas I come up with are usually the best for everyone. But I feel uneasy. I always wonder what other people really think of me and my ideas.

My marriage has gone fiat. We don't fight or anything; we just don't love each other anymore. We've gone to counseling; we've tried a number of things, but we just can't seem to rekindle the feeling we used to have.

A few years ago, my wife Sandra and I were struggling with this kind of concern. One of our sons was having a very difficult time in school. He was doing poorly academically; he didn't even know how to follow the instructions on the tests, let alone do well on them. Socially he was immature, often embarrassing those closest to him. Athletically, he was small, skinny, and uncoordinated -- swinging his baseball bat, for example, almost before the ball was even pitched. Others would laugh at him.

Sandra and I were consumed with a desire to help him. We felt that if "success" were important in any area of life, it was supremely important in our role as parents. So we worked on our attitudes and behavior toward him and we tried to work on his. We attempted to psych him up using positive mental attitude techniques. "Come on, son! You can do it! We know you can. Put your hands a little higher on the bat and keep your eye on the ball. Don't swing till it gets close to you." And if he did a little better, we would go to great lengths to reinforce him. "That's good, son, keep it up."

When others laughed, we reprimanded them. "Leave him alone. Get off his back. He's just learning." And our son would cry and insist that he'd never be any good and that he didn't like baseball anyway.

Nothing we did seemed to help, and we were really worried. We could see the effect this was having on his self-esteem. We tried to be encouraging and helpful and positive, but after repeated failure, we finally drew back and tried to look at the situation on a different level.

At this time in my professional role I was involved in leadership development work with various clients throughout the country. In that capacity I was preparing bimonthly programs on the subject of communication and perception for IBM's Executive Development Program participants.

As I researched and prepared these presentations, I became particularly interested in how perceptions are formed, how they govern the way we see, and how the way we see governs how we behave. This led me to a study of expectancy theory and self-fulfilling prophecies or the "Pygmalion effect," and to a realization of how deeply imbedded our perceptions are. It taught me that we must look at the lens through which we see the world, as well as at the world we see, and that the lens itself shapes how we interpret the world.

As Sandra and I talked about the concepts I was teaching at IBM and about our own situation, we began to realize that what we were doing to help our son was not in harmony with the way we really saw him. When we honestly examined our deepest feelings, we realized that our perception was that he was basically inadequate, somehow "behind." No matter how much we worked on our attitude and behavior, our efforts were ineffective because, despite our actions and our words, what we really communicated to him was, "You aren't capable. You have to be protected."

The Personality and Character Ethics

At the same time, in addition to my research on perception, I was also deeply immersed in an in-depth study of the success literature published in the United States since 1776. I was reading or scanning literally hundreds of books, articles, and essays in fields such as self-improvement, popular psychology, and self-help. At my fingertips was the sum and substance of what a free and democratic people considered to be the keys to successful living.

As my study took me back through 200 years of writing about success, I noticed a startling pattern emerging in the content of the literature. Because of our own pain, and because of similar pain I had seen in the lives and relationships of many people I had worked with through the years, I began to feel more and more that much of the success literature of the past 50 years was superficial. It was filled with social image consciousness, techniques and quick fixes -- with social band-aids and aspirin that addressed acute problems and sometimes even appeared to solve them temporarily, but left the underlying chronic problems untouched to fester and resurface time and again.

In stark contrast, almost all the literature in the first 150 years or so focused on what could be called the Character Ethic as the foundation of success -- things like integrity, humility, fidelity, temperance, courage, justice, patience, industry, simplicity, modesty, and the Golden Rule. Benjamin Franklin's autobiography is representative of that literature. It is, basically, the story of one man's effort to integrate certain principles and habits deep within his nature.

The Character Ethic taught that there are basic principles of effective living, and that people can only experience true success and enduring happiness as they learn and integrate these principles into their basic character.

But shortly after World War I the basic view of success shifted from the Character Ethic to what we might call the Personality Ethic. Success became more a function of personality, of public image, of attitudes and behaviors, skills and techniques, that lubricate the processes of human interaction. This Personality Ethic essentially took two paths: one was human and public relations techniques, and the other was positive mental attitude (PMA). Some of this philosophy was expressed in inspiring and sometimes valid maxims such as "Your attitude determines your altitude," "Smiling wins more friends than frowning," and "Whatever the mind of man can conceive and believe it can achieve."

Other parts of the personality approach were clearly manipulative, even deceptive, encouraging people to use techniques to get other people to like them, or to fake interest in the hobbies of others to get out of them what they wanted, or to use the "power look," or to intimidate their way through life.

Some of this literature acknowledged character as an ingredient of success, but tended to compartmentalize it rather than recognize it as foundational and catalytic. Reference to the Character Ethic became mostly lip service; the basic thrust was quick-fix influence techniques, power strategies, communication skills, and positive attitudes.

This Personality Ethic, I began to realize, was the subconscious source of the solutions Sandra and I were attempting to use with our son. As I thought more deeply about the difference between the ... --此文字指其他 kindle_edition 版本。
阅读更多