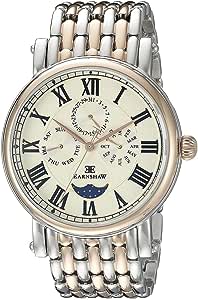 Born in Manchester, England in 1749, Thomas Earnshaw was celebrated for his work in refining, and improving upon the marine chronometers of the era. It was these marine chronometers that became crucial to the journeys taken by the boats in the Royal Navy as they circled the globe during a golden era in English history of science and exploration. This emboldened spirit of discovery inspires these timepieces in both design and construction.

As watchmakers whose designs and timepieces are inspired by the eventful British maritime history of the dramatic search for longitude in the seventeenth and eighteenth centuries, the Thomas Earnshaw brand have paid tribute to Nevil Maskelyne for his enormous contributions to measuring longitude and also the role he played in recognising eighteenth century Earnshaw's marine chronometer as being highly instrumental in accurately measuring the elusive longitude. To make it safer for ships to navigate the seas, a Board of Longitude had been set up in the 1700s with the sole purpose of encouraging inventors and innovators to solve the problem of measuring longitude accurately by offering prize money to the most accurate measurement device. At the time there was much clamour, and all sorts of suggestions were put forward as the prize money stood at an almighty GBP20 000 for the first prize.

As a watchmaker who famously contributed to the development of the marine chronometer, Earnshaw was also in the running for the prize. So, in the 1780s, as Astronomer Royal based at the Royal Observatory, Greenwich, Nevil Maskelyne was an important acquaintance to Thomas Earnshaw. Not only did he commission him to build a clock for the new observatory in Armagh, Ireland, but years later he supported Earnshaw throughout a patent contest, actively promoting Earnshaw's chronometer as the most accurate means to measure longitude, and therefore that he be awarded prize money as advertised by the Board of Longitude.

And today, modern watchmakers Thomas Earnshaw have launched a collection of watches in memory of Astronomer Royal Nevil Maskelyne and his work. The spectacular watch collection exudes charming old time elegance synonymous with the grandeur of a powerful position.

A classic styling and beautifully rounded bezel frame a dial which is adorned with four sub dial displays three of three denote the day, date and month of the year and the last is a stunning moon phase dial which pays tribute to the many nights Maskelyne would have spent wrapped up gazing at the celestial skies.

Bold roman numerals form the border round the main dial and add to the classic styling of the collection, the theme of which is continued with the use of a stainless steel bracelet, and simple crown.

Crafted with a Japanese quartz movement, the ES-8031 Maskelyne is a truly handsome watch available in a stainless steel case, or 18k rose gold or 18k yellow gold plating and hardened mineral crystal protective cover. The Maskelyne Collection is a stunning series of classic timepieces from modern watchmakers Thomas Earnshaw which pays fitting tribute to one of the great thinkers in British maritime history.