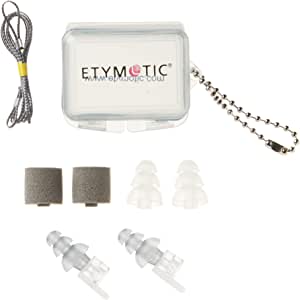 sjpro
5.0 颗星，最多 5 颗星 Like the three bears, these are just right.
2018年4月24日 - 已在美国亚马逊上发表
已确认购买
I purchased 7 different brands of acoustic earplugs for an upcoming concert, based on amazon and youtube reviews. It's been a long time since I've been to a show and I currently suffer from ear related issues and tinnitus. Out of all the other brands these ones have the proper balance of rigidness and flexibility. I am able to quickly insert and remove these. They are not the most comfortable but give me a perfect seal and the confidence to wear these to a loud show. These are the ones to buy.
阅读更多
28 个人发现此评论有用

Joyce E
4.0 颗星，最多 5 颗星 Works well and good value but don't expect miracles.
2017年3月8日 - 已在美国亚马逊上发表
已确认购买
After listening with my old foam earplugs at 110db rock concerts and hearing totally muffled sound music, I had high hopes for the ER20XS Etymotic High Fidelity Earplugs. Last night at a Big Bad Voodoo Daddy concert (highly recommended) I got my first chance to try them. They were a big improvement over my old foam earplugs and I would buy them again, but at the same time, users should not expect miracles.

The description of "20-dB equal sound reduction across the spectrum of hearing" is a bit of a stretch. As with foam earplugs, they attenuate higher frequencies more than lower ones. To Etymotic's credit they show a attenuation chart in the product description which pretty accurately corresponds to my observations, i.e. they attenuate somewhat more at the higher frequencies, but above 1500 HZ they have a better response than foam plugs.

To summarize, for the price the ER20xs earplugs are a good value and a big improvement over foam earplugs even though the frequency response is not exactly flat across the spectrum.

LG
5.0 颗星，最多 5 颗星 Good Evolution of the ER20/ETY Plugs
2018年2月17日 - 已在美国亚马逊上发表
已确认购买
A nice evolution over the old style ER20/ETY plugs with the interchangeable eartips. As a bagpiper protecting my hearing from the loud noise of the pipes while retaining clarity of the sound is essential. I had been using the old style ETY plugs but found them uncomfortable to wear for long periods of time. These with the foam eartips I can wear indefinitely without bother.

If you're new to the whole ER20 thing, I recommend starting out with the universal fit to determine which eartip option works best for you then just stock up on more eartips of the type that best fits you for the most economical solution.

Tommy
4.0 颗星，最多 5 颗星 They work nearly as advertised, but aren't super comfortable
2019年1月17日 - 已在美国亚马逊上发表
已确认购买
So these do work. They lower the volume as opposed to blocking the sound (like a foam earplug would). However, at least for me, you do lose the feeling of the music. You lose a lot of highs. Mids sound fine, maybe a tad muddled. Bass sounds fine too. But losing the highs definitely takes away from the soul of the music.

Now, with that being said, it is MUCH better than foam ear plugs. It *IS* like turning down the volume, but it's also like switching from your expensive home audio system to a portable bluetooth speaker.

The genre of music DOES matter. For anything with instruments I almost never wear these. I'd rather hear the full body of music. But for EDM these things are LIFE SAVERS. Er, ear savers, I guess. EDM is more about the lows and mids and less about the highs, so these earplugs don't ruin the sound as much. I was just a few rows away from the stage during a Bassnectar show, so I was close to some gnarly loud speakers. Not only were my ears very well protected, but everything still sounded great. My friends had to retreat to the back because their ears were hurting so much, but I was able to stay up front.

Later in the year I purchased "EarPeace HD Concert Ear Plugs - High Fidelity Hearing Protection for Music Festivals, DJs & Musicians (Standard, Red Case)" (https://www.amazon.com/gp/product/B076VTXWBP/). In comparison the EarPeace was much more comfortable. The Etymotics start to dig into your ear and become uncomfortable after a while. The EarPeaces fit much more softly in your ear. However, the Etymotics had far superior sound quality than the EarPeaces. The EarPeaces sounded much more muddied than the Etys. Granted, I only tried the mid-grade sound dampening filter of the EarPeaces (they came with three filters, most dampening, some dampening, least dampening). Next time I will try the least to see how they compare to the Etys.

Now back to the Etys. I never tried the foam plugs. The carrying case sucks, it's difficult to use and open. Also, don't get caught up on having a lanyard. With both the Etys and the EarPeaces neither plug would simply fall out of your ear without coercion. And when you take out the plugs and use the lanyard to rest them on your shoulders, it honestly feels like the lanyard could fall off me at any moment. The EarPeaces didn't come with a lanyard, which had me worried. But when using them in the field I realized I didn't need it and I was better off putting them directly back into their case anyway. (Which, btw, EarPeace has the superior case).

So yes, the Etymotics do work. They don't work great, although they work better than EarPeace. They aren't very comfortable, however, I've found that you can't rely on someone else's definition of comfort. Everyone's ear canal is shaped different.
阅读更多
7 个人发现此评论有用

James e benson
5.0 颗星，最多 5 颗星 Saving my ears but not killing my live mix
2017年11月28日 - 已在美国亚马逊上发表
已确认购买
These are great at the price. I mix live bands and they come in very handy on nights with extra loud bands. They allow me to still hear most of what I need to hear and mix. I do take them in and out a lot during a set to make sure I’m not missing anything, but once I get the band dialed in I stick them in to help save my ears and can still hear all the parts. They aren’t perfect and like I said if I think I hear something I pull them out and really listen, but for the money I think this was a great investment to help protect my hearing that I need to do my job day in and day out
阅读更多
8 个人发现此评论有用
加入亚马逊Prime，从此免运费
亚马逊Prime会员可享海外购美/英/日/德跨境免邮，全年无限次！更有免费无限次阅读电子书服务
> 立即加入
了解我们
合作信息
帮助中心和购物指南