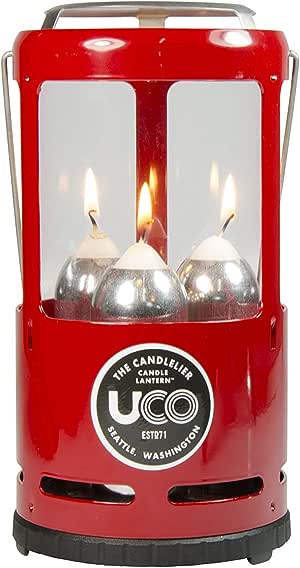 CutTrack
1.0 颗星，最多 5 颗星 Complete Meltdown
2019年2月12日 - 已在美国亚马逊上发表
已确认购买
Purchased one of these lanterns several years ago and it works flawlessly to this day. So I purchased 3 more, one for myself and two for a friend. Noticed something was different with the supplied candles as they were squared off on two sides. Thought perhaps a change had been made in manufacturing or third party supplier. Assembled lantern as per instructions the same way I have with my older model dozens of times. Everything seemed to function normally, springs working fine. Unfortunately once the candles were lit the flaw in the candle design resulted in catastrophic failure. The flattened sides on the candles allowed melted wax to pour down into the spring chamber causing the springs to seize. As the candle melted down inside the spring chamber it created even more heat accelerating the melting process compounding the problem. Within minutes all three candles had melted down half way and filled the base with wax. It took a good hour of work to get the remaining candle stubs out and mess cleaned up. I have a stockpile of original replacement candles (no squared sides) and I will try them in the new lantern. Hopefully this solves the problem. If not the lantern will have been a complete waste of time and money. At least I have the original unit from years ago which has never failed me. Unfortunately it looks like I won't be able to resupply with original candles as I have noticed in the reviews for the refills that they are the same misshapen candles as I got with this order. Too bad that a great product gets ruined by unnecessary cost cutting and poor quality control.
阅读更多
85 个人发现此评论有用

team W
5.0 颗星，最多 5 颗星 Sometimes the older ways are the better ways...
2015年7月28日 - 已在美国亚马逊上发表
已确认购买
This is a cleverly designed candle lantern. The candles sit in little retaining cylinders with springs underneath them, so as the candle melts, the flame stays in exactly the same, ideal spot. The flame is protected by glass so it works even in moderate wind and the three candles are apparently powerful enough together that you could eventually boil water by placing a container on the flat metal top of the lantern (although I have never tried that). But while this design is clever, it is running on a technology that would be perfectly familiar to Benjamin Franklin.

In today's modern world, is something that runs on candles practical? Not really. You can get an LED lantern that is smaller, lighter, more durable, gets much brighter, doesn't use expensive candles, and has no fire hazard associated with it.

But I just returned from a five day car camping trip, and I barely used my big LED lantern, while this thing got lit every single night.
The LED lantern got relegated to helping me do dishes or other task-based duty where I needed a lot of light. But then it got switched off almost immediately in favor of this lantern, which ran from dark until bedtime.

The harsh "cool" white light from a modern LED lantern just cannot compare with the pleasant, warm, soothing glow of this lantern. I used this in conjunction with a few of the smaller UCO tea light lanterns and it made my campsite such a pleasant place after dark. Hiking around the larger campground after dark, I saw LED lantern after LED lantern, and there was really no comparison in how much nicer my campsite was than those who had fallen for the latest technology.

You go camping because you want to enjoy yourself. This is a small luxury item with an absolutely huge payoff in ambiance. This is one of the best things I bought for the most recent trip, and it is definitely coming with me on future adventures.

Yes, you could also use it as an emergency light source, provided you put up enough of the relatively expensive, special candles it takes. But it is probably not the most cost-effective way to handle that situation. If you are just looking for a utilitarian light, buy an LED lantern and some extra batteries for it. This is a lantern to use when you want more than just lumens out of your light source. In that role, it absolutely excels.

I would definitely buy the little protective neoprene sleeve for it. Even then, it should be handled carefully. The candles last a good long time, but buy them in bulk, they are much cheaper that way.

Becky Blanton
5.0 颗星，最多 5 颗星 Must have if you're a van dweller, prepper, or camper
2019年8月28日 - 已在美国亚马逊上发表
颜色: 红色已确认购买
This lantern is amazing at heating up a van or vehicle when car camping. It won't keep you warm if the temps are below 40 degrees F, but it definitely takes the chill out of the air on cool nights. The top gets hot enough to boil water for tea, so yeah - it puts out some heat. The candles are expensive, but there are YouTube hacks for making your own. Easier and cheaper to buy them unless you use it daily tho. No odor, no smoke, just light, and heat. Highly recommend.
阅读更多
18 个人发现此评论有用
加入亚马逊Prime，从此免运费
亚马逊Prime会员可享海外购美/英/日/德跨境免邮，全年无限次！更有免费无限次阅读电子书服务
> 立即加入
了解我们
合作信息
帮助中心和购物指南