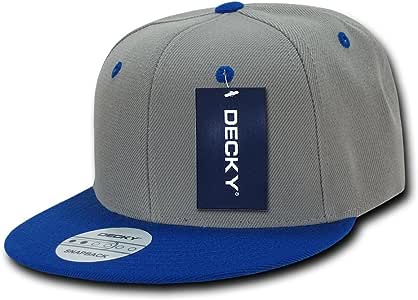 颜色: Grey/royal
技术细节
更多信息
我来补充
Would you like to tell us about a lower price?

The hot fashion style of today’s ball players involves a part of the uniform that is designed with a functional purpose. Players have taken that purpose and used it to instill a fashion statement alongside the functionality. I am referring to the brim of hats, or ball caps.

The reason players even wear ball caps is to be able to block out the sun and sometimes the lights at night. That is the functional purpose of the hat. In previous generations, players would bend the brim, or the bill, of the cap to get more coverage over the corners of their eyes. This style of bending the brim is how most hats are made and designed to be worn, as they provide more shade over the eyes that way.

Flat bill hatOne of the more prevalent and extreme examples of players bending the bill of their hats is seen by Little League teams from Japan in the LLWS each year. They tend to over bend their bills but do so nonetheless. The exact opposite is seen by almost every other Little League player today as well as many big league players.

Some Major Leaguers now have adopted the flat bill style even going so far as to bend it slightly upward. This isn’t a popular look among many of the older fans and viewers of baseball; it’s different and just doesn’t look right when it is taken to an extreme. Fernando Rodney is the biggest culprit out there as he turns his hat to an almost 45 degree angle while keeping it stiff as a board. His worst look was in the most recent World Baseball Classic pitching for the Dominican Republic.

There is a difference between a curved bill, a flat bill, and a slightly curved bill. The slightly curved bill is by far what I believe should be the most common and most used. Unless you are wearing sunglasses on the top of your hat that you want to have a completely smooth and flat surface to lay on, then there needs to be a bend in the hat. Maybe not to the extent of how fashion trucker hats can look, but at least so that water would run off the sides and not make a puddle right over your head.

Hats typically come with a flat bill in the store, but this is more so for stocking purposes. If you go and buy an official MLB hat of your own, be sure to do us all a favor and remove the sticker on top as well. There is nothing that looks more stupid than someone that has the size of their head, or two sizes bigger, labeled on their hat for everyone to see. They might as well leave the waist size sticker on their jeans as well. That’s a separate rant for another day though.

Each player wears his hat a different way, but there is definitely a right and wrong way depending on who you ask. Old timers will tell you to bend it, younger players today will want to keep it flat. It all comes down to comfort and what you think looks best and fits well.

Ellen Kling
4.0 颗星，最多 5 颗星 Homestar Runner hat!
2019年12月13日 - 已在美国亚马逊上发表
颜色: Royal/Red已确认购买
I bought this hat as part of my Homestar Runner halloween costume. I added a little propeller that I made out of white foam craft material from Michael's. The hat itself was fairly uncomfortable and ill-fitting, but it was one of the only hats I could find online with the right structure and color combination to match Homestar's. It has an adjustable back, so that's good!
阅读更多

Jay
3.0 颗星，最多 5 颗星 Runs small
2019年11月26日 - 已在美国亚马逊上发表
已确认购买
Looks cool but it fits pretty small. I am an average sized guy but the hat only has two snaps left. My best friend can't wear it at all.
阅读更多

Quino
3.0 颗星，最多 5 颗星 Great trucker cap!
2018年1月20日 - 已在美国亚马逊上发表
已确认购买
The cap is solid, well made and looks good wont give it 5 stars just because I want it the blueish one that I saw and I got a grey one! Thats the only reason then is a 5 stars hat!
阅读更多

INameless Network
5.0 颗星，最多 5 颗星 GREAT HAT!! Highly Recommend
2017年10月13日 - 已在美国亚马逊上发表
颜色: 灰色/黑色已确认购买
Great hat at an amazing price! This is my 4th time getting the same hat. I do not like washing hats in the washer or dish washer and my line of work my hands get dirty so of course my hats gets dirty so when they are to dirty i simply pay ten bucks for another. i love them! highly recommend!
阅读更多
加入亚马逊Prime，从此免运费
亚马逊Prime会员可享海外购美/英/日/德跨境免邮，全年无限次！更有免费无限次阅读电子书服务
> 立即加入
了解我们
合作信息
帮助中心和购物指南