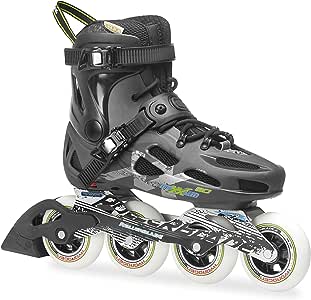 Charles Nickles
5.0 颗星，最多 5 颗星 Smooth ride , needs a break in
2015年6月14日 - 已在美国亚马逊上发表
已确认购买
My old roller blades are 20 yr old It was time to replace them so I selected the Maxxum for the hard boot , like my old ones and the 90 mm wheels. Size: Hard to find a store that stocks the high end in line skates so we have to order on line, I wear an 8 1/2 (US) and I'm a little wide so I ordered a 9. I'm happy with it. I have toe room and the boot is snug around my fore foot. Not bad for a stock boot. I like the way the 2 straps tighten up like a ratchet. I removed the brake, and they provide a shorter axle and tool to do that. They also have a boot strap in the back to pull them up. Great idea, Thank you Rollerblade. The 90 mm wheel give a smoother ride, enabling a faster ride. To that einerxtent they are faster . I had to make my cross over turns more deliberate with the longer wheels base but I'm getting the feel of it . Soon I'll try going backwards as I did on my old skates. Break in : Like other reviewers I had an little ankle rub. at the end of a 6 mile run. Back home I removed the liner and marked the place where my angle touches. I rubbed the liner at that point with my thumb to push the stuffing away, and make a little crater in the liner . It simulated weeks of break- in. In my case that was enough , the next day out it felt fine.
阅读更多
6 个人发现此评论有用

JoyRide
2.0 颗星，最多 5 颗星 I wanted to love these, but...
2014年7月31日 - 已在美国亚马逊上发表
尺寸: 9.5颜色: 黑色/灰色已确认购买
I was pumped when I ordered these new skates. The specs are off the chart and they have the old school all plastic boot. I have never been a fan of the newer soft boot style as they are so mushy and sloppy. The new soft boots just don’t offer the support of the old school plastic boots. When my skates I arrived I opened the box and was in awe, these skates looked awesome. The build quality was great and so were the components. But, once I tried them on things went downhill fast! The way the boot is cut it makes the pivot point on the boot very low and in turn it’s below your actual ankle. Because of this it creates a giant pressure point on the side of your ankle bone. I thought maybe they needed some break in time so I wore them around the house for a few days, since you can’t wear skates outside and expect to return them. Unfortunately these skates didn’t break in one bit. As I was packing them up I had a single tear run down my cheek. I wanted these to work so badly! Back to my mushy skates I go.
阅读更多
16 个人发现此评论有用

Michael J. Mieney
4.0 颗星，最多 5 颗星 Very nice skates but not for everyone
2015年7月5日 - 已在美国亚马逊上发表
已确认购买
These are very nice skates, I just love them, they are very fast. As someone who has skated for approximately 20 years on a pair of Rollerblade Bravoblade GLs (which I will continue to use, also), I wanted a hard boot style for my upgrade. Of course, the soft boot style is much more common, now.

I was expecting a break in period based on my experience with the Bravoblades. After a couple times out with the Maxxums, it is apparent to me that this break in will not be nearly as lengthy as the Bravoblade break in was. If you do not want to break in a pair of skates, then the soft boot might be better for you. My experience is that hard boot styles roll on for years after the soft boots have worn out.

Some of the reviews really worried me after I ordered these so I will try to clarify as to the disparity in reviews ...

1. The sizing is fairly true but a little small, I would recommend ordering 1/2 size larger than your sneaker size. I bought size 11.
2. If you have a wide foot (mine is medium), I would consider another skate. I am sure that the hard boot would be unforgiving for a foot wider than my own.
3. Some reviewers criticized the skate for uncomfortable ankle fit. I did not have a problem, but I have long lower legs and my ankles are probably more slender than most at the point where the padding surrounds the ankle. My advice is this: Measure up 8 in. from the bottom of your heel onto your ankle, then measure the circumference. Mine is 10 in., and the ankle on the skates (size 11) is just perfect. If your ankles are considerably larger, then you might want to consider a different skate.

When they arrived, I put them on and walked around on the carpet for an hour or so to see where they were likely to hurt during break in. They did seem slightly problematic on my arches. As a result of this, I placed strips of duct tape onto my arches under my socks before my first couple outings, this is a fairly sound tactic for any new skates but for hard boots in particular. I did not get blisters as a result.

I wanted to give these five stars but one side of one of the pull up straps was mis-attached and would have pulled out as a result if I would have used the strap to pull the skate on. These are my skates, now, so I put additional stitching into the attachment of the straps using a high tensile thread, the straps will be fine with the fix. I know that many people would be very turned off by this sort of thing but I find such sewing problems rather common in this day and age where I assume that the person that made this stitch was probably working 18 hour days for pennies (Made in Thailand).

Hope this helps, once again, very, very nice skates but not for everyone.

M R
5.0 颗星，最多 5 颗星 AWESOME!!!
2016年5月2日 - 已在美国亚马逊上发表
已确认购买
Awesome blades, the only small drawback would be that the release button for the clamps on the belts are a bit pronounced, so if you happen to touch anything on the side of the boot, it will release the belts and they will entirely loosen up, now this might help when you fall, kinda like skis, but it's annoying if you just happen to slightly bump into a bench or something low. Aside from that, by far the best for the money.
阅读更多
1 个人发现此评论有用