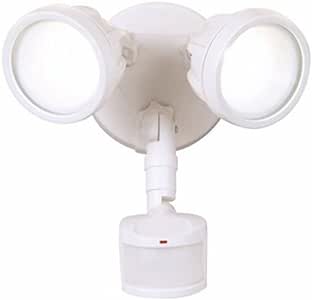 First off, these are a great price for what you get. They seem to be well constructed. It's tough to see from the picture, but these are a great setup for shallow to flush mounting boxes. I had a standard depth box in my stone front that these fit over very well, however, had I not had the space to put all the wire nuts in the box, there was plenty of space in the light. Please note, the units do protrude out about 2-3", so they won't be flush to the wall. The mounting plate allows for multiple orientations so you always have the perfect finished appearance, the units I ultimately ended up, at $40 more per unit, didn't have this bracket and my lights ended up in a 90 degree orientation, so I appreciate this addition. The installation was easy, remove existing light (if necessary), screw in the mounting plate, position the rubber gasket, connect the wires, screw in unit. It was really that simple and took me less than 15 min per unit. So why the four stars?? The screws are crap. I broke a screw stepping on it and stripped the head of another. I spent $4 at Lowe's, purchased some stainless steel replacements and was back in business.

The finished procuct looked great. The lights are really bright, just as advertised and reviewed. The color spectrum is 5000k which puts off an eerie White to almost blue-ish hue. My wife hated that they didn't match the rest of the landscape lights so back they went. I left them installed for about a week and they were next to sprinkler heads. I didn't see condensation like others have reported, but this could also be that they were only installed for a week. They received direct water from the sprinkler but never showed any signs of water penetration. If you can stand the 5000k color, these are a great product. I would have gladly purchased the identical mfg and product had there have been a 3000k line.
阅读更多
26 个人发现此评论有用

Good book reader
5.0 颗星，最多 5 颗星 Design Problems during and after installation.
2016年12月13日 - 已在美国亚马逊上发表
已确认购买
Product: All Pro Outdoor Security FTR1740LW LED Twin Head Flood Light, 1600 lm, White.
January 2018 - I have upgraded my Sept 2016 rating from 3 to 5 stars. I reinstalled the lens glass, the retainer rings, and silicon ring and insured that it was tightly secured. We are now in our 3rd winter season with the lights and have had no further problems. We are very happy with them and expect that they will function perfectly for as long as we live in this house - hopefully another 20 years or so.
In September 2016 I purchased four of these floodlights and installed them under the eves of our house to replace the original floodlights that had been installed in 2009. The original floodlight fixtures were made of plastic and used the standard 150w incandescent flood light. Unfortunately water and ice cracked the bases and sockets and a couple of the incandescent bulbs have to be replaced. First, this meant finding a ladder that would reach a 3rd story eve. Second, given that I am 75, I wanted a fixture that was impervious to weather (water and ice) and would not require replacement of the bulbs (8 of them) every year or so. The metal and glass “maintenance free” exterior of the All Pro series floodlight with led lights that last 35,000 hours seemed to be just what I needed. Since I turn outside floods on only occasionally and normally do not run them more than four hours at a time, this sounded like I would never have to climb that ladder again. It is for these reasons, higher quality and maintenance free, that I paid a much higher price for these new floodlights. Unfortunately, I looked out a window this morning (December 12, 2016) to see the glass lens from both lights on one fixture on the ground along with their retainer rings, silicon gaskets, and interior light reflectors. Upon inspection all the parts were in good condition – not damaged. When turned on the LEDs remaining in the fixture attached under the eve came on. From what I could tell from the ground with a telephoto lens, the fixture attached to the house is not damaged either. Finally, the other three All Pro Twin Head Flood Lights, installed at the same time as this one are still intact (keeping my fingers crossed on that). What caused this failure? Apparently the lens retainer rings just came loose. Why? My guess is either a design or manufacturing defect (or both) exacerbated by the freeze-thaw weather cycle we have been experiencing in the last week or so. Apparently there was not enough testing of the product before it was approved for production or there is a quality control problem during production. Whatever the reason, the lens cover assembly should not just fall off 3-months after installation when it starts to get cold. While on the subject of design, another point was the flat gasket provided to serve as a weather seal between the house and the fixture during installation was difficult to handle and not very effective when installed. I noticed that the plastic light fixtures I removed had a better idea. They had a rubber "O" ring with a “U” shaped groove running through its length on one side. This fit very nicely over the edge of the fixture that met the surface of the house and stays in place, unlike the flat gasket provided, during the installation process. It is a far better idea and lot easier to handle when working 3 stories up on a ladder. While I was very pleased with and the coverage of lighting the All Pro design provided, I am now concerned about their long-term quality (especially as the weather gets worse) and am hoping that the above described failure proves to be an aberration of some sort. Only time will tell. In the meantime, I need to borrow that ladder again. Sigh…..
阅读更多
21 个人发现此评论有用

ardal
1.0 颗星，最多 5 颗星 It's 5000k color, not 3000k
2017年6月20日 - 已在美国亚马逊上发表
已确认购买
After reading the reviewers confusions on 3000k vs 5000k color temperature, I talked with Amazon Rep before ordering. They attached a memo to the order to make sure the shipped item was 3000k as advertised. Still got the 5000k color. Too white for patio. Like someone said “It’s like sitting in a parking lot”. It’s ok for security light applications like driveways, sides of the house. Another note that these lights are designed for flush mounting. Too large to seal, weatherproof on a standard junction box that is not flush mounted. All Pro Outdoor Security FTR1740LW LED Twin Head Flood Light, 1600 lm, White
阅读更多
10 个人发现此评论有用

LadyA
1.0 颗星，最多 5 颗星 Waste of Money
2019年10月29日 - 已在美国亚马逊上发表
已确认购买
We bought and had these lights professionally installed last year. We have had them a little over a year at this point and within two weeks of each other, two of the four units we installed began flickering and ultimately blew out. When we had the first unit taken down and reinstalled professionally, it was discovered that water had gotten into the light lens. It appears that there is definitely some sort of defect issue with the seal for the light lens. We suspect the same thing has happened with the second unit that has blown. I guess this is the reason the light has a 5 year warranty. We will never buy this brand of light again.
阅读更多
1 个人发现此评论有用
加入亚马逊Prime，从此免运费
亚马逊Prime会员可享海外购美/英/日/德跨境免邮，全年无限次！更有免费无限次阅读电子书服务
> 立即加入
了解我们
合作信息
帮助中心和购物指南