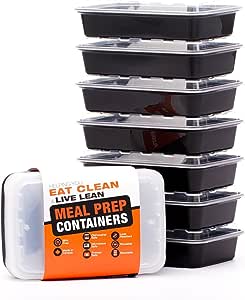 BB
5.0 颗星，最多 5 颗星 Best Value All Around **06/09/19 Update**
2018年1月12日 - 已在美国亚马逊上发表
包装数量: 1尺寸: Single Compartment, 28 Ounce已确认购买
After researching and reading the reviews of several brands of similar containers available on Amazon, these seemed to offer the best value in quality, size, and quantity. I initially purchased two sets of the single compartment containers, and not only did they live up to the many great reviews, they far exceeded my expectations. So much so, that I purchased three additional sets of the 2 compartment containers. I had an upcoming surgery scheduled with aftercare that required 6-8 weeks of extremely limited mobility, and I purchased my first 2 sets to make my own homemade "Frozen TV Dinners" to have during my recovery. My five sets we're purchased in 3 separate orders and all 3 shipments arrived well packaged with all containers intact. With 9+ months of continued use, of the 50 containers purchased, I've only had to discard two lids due to breakage (see below). When used for freezing, they do a terrific job of keeping food fresh and without freezer burn for right at 3 months. After 3 months, I have noticed ice particles start forming. They work perfectly going from freezer to microwave. However, while the lids are frozen they are a bit brittle and two cracked as I tried to vent a corner before reheating in the microwave. What has worked best for me is to microwave on high for 2 minutes and then vent the lid's corner for the remaining 2-4 minutes of cooking. After I attach the lid, to get a truly leak-proof seal, I've found it best to use my thumb and forefinger to pinch around all four of the lid's sides. After doing this, I've found even broth-based soups will not leak out even if the container remains upside down. These containers are perfect for packing a week's worth of lunches at once and for storing leftovers. Instead of ziploc baggies or foil, I use them to store opened packages of blocks of cheese, bags of frozen vegetables, sliced fruit, etc. They're sturdy, dishwasher safe, leak proof, don't get stained from red sauces, BPA free and are more economical than the reusable containers I've purchased in the past at supermarkets (ie, Ziploc plastic containers). If buying multiple sizes, I have this to offer: While the one & two compartment lids stack perfectly on top of each other and appear to be identical, they are NOT interchangeable, and I found this to be quite aggravating. To combat this, I used a Sharpie to mark each lid with a small "1" or a "2" to distinguish whether it was for the single or double compartment container. I can fully recommend these.

**Update** June 9, 2019
I purchased 2 sets of these containers -one & two comprtments- about 18 months ago and have used them often. I use them to freeze meals which I then microwave and clean them in a dishwasher. I also use them to store opened blocks of cheese, cut-up veggies, etc. After 18+ months of frequent use, it's time for me to re-order them. I certainly wasn't expecting to get the use out of them that I did!! Given this, I can recommend themeven more now than I did in my initial review!
阅读更多
71 个人发现此评论有用

amw85
5.0 颗星，最多 5 颗星 Awesome product! Great way to save time and money.
2016年2月5日 - 已在美国亚马逊上发表
包装数量: 1尺寸: Single Compartment, 28 Ounce已确认购买
These containers are a lifesaver! They save me so much time and money! I wish I had discovered them sooner. I used to live off of those processed frozen TV dinners until about 2 years ago when I decided to go vegan and adopt a plant based, mostly whole foods diet. In the last 2 years I have admittedly missed the convenience of being able to pop a tray in the microwave and have a meal in five minutes, but now I can again (only a healthy, home cooked version).

I live alone and find it difficult to cook for one, so I always end up making huge batches of food and the leftovers ultimately end up in the trash because I simply cannot finish them quickly enough. Not anymore! Now I can just stick my leftovers in the freezer and have a variety of different home-cooked meal options in my freezer all at once!

I also really like these containers because they are a good way to control my portions. Since I cook large batches and I am the only one eating it, I find myself sometimes going back for seconds or even thirds. These containers are the perfect meal size. Not too big and not too small.

My first prep was baked tofu, brown rice, and lots of broccoli =)

EDIT: I bought 7 of these and 7 of another brand of meal prep containers here on Amazon. These are $10 and the other brand was $18. When they arrived I noticed that they are the SAME EXACT CONTAINER! Just a heads up in case you had your eye on both brands.

EDIT: After having these containers for about 2 months I will say that they do begin to deteriorate after being frozen and microwaved several times. The black part has lost it's original shape and is beginning to chip and crack. The lids are still in good shape because I do not microwave them. As of right now the containers are still usable, and I might get a couple more months out of them, but this is definitely the type of product that will need to eventually be replaced after a lot of uses. But that is to be expected from a product made of thin plastic and I will continue to repurchase.
阅读更多