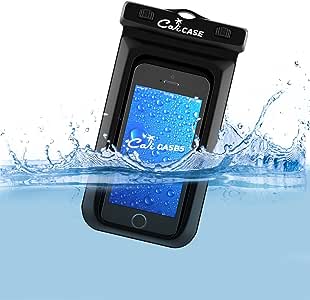 Jason H
5.0 颗星，最多 5 颗星 Excellent case for a day on the water!
2015年10月16日 - 已在美国亚马逊上发表
已确认购买
I had a canoe trip coming up here recently and when I was 3 days out from leaving, thank goodness for Prime, I realized that I wanted some type of water proof cover for my phone so I could use the camera on it and not worry about water or sand. When I came across this case I noticed it had an additional feature that I hadn't considered yet; it could float. I decided to buy the bright orange that way if I dropped it in the dark or in dark fast moving water I could hopefully track it better.

The case arrived the day before my trip so I decided to do some tests before using it in the wild with my phone in it. I started by putting a napkin in it, sealing it up, putting a coaster on it to hold it down in the sink, and filling the sink up with water. I left it like this for a couple of hours, dried off the outside, and opened it up. The napkins were completely dry. Now that I trusted its capabilities to keep water out, I put my phone in the case and put it in the full sink. It was plenty buoyant.

On the trip I was able to unlock my phone, open apps, and take pictures with the case on without any problems or worry. There's a clear panel on the front that allows you to see and use your screen and a smaller window on the back for your phone's camera to look through. The most extreme thing I did with the case is recorded a first person video of me jumping off a 10-15 foot ledge into the river. The case still managed to keep my phone safe.

I have a 2015 Moto X Pure/Style, which has a 5.7" screen. The case was plenty big to accommodate this size phone without a case. I tried it first with a case on, and it did fit, but it was difficult getting the phone back out again.

My one piece of constructive criticism is this. Since this case is clearly meant to be used around water, the lanyard that it comes with should be a break away for safety reasons. That's just my two cents. Other than that, I am 100% happy with this purchase!
阅读更多
106 个人发现此评论有用

Hannah
1.0 颗星，最多 5 颗星 Leaky, bulky, and terrible.
2018年7月7日 - 已在美国亚马逊上发表
颜色: 黑色已确认购买
Honestly, I am so disappointed. My CaliCase was defective. I put toilet paper inside of the case, locked it in and submerged it into a pool of water for about 1 minute. I completely dried off the case before removing the tissue to make sure it wasn't residue from the outside of the case getting into the toilet paper. Surely it was not. My CaliCase was leaking. Not to mention, the size is enormous. The weight is so heavy and feels like you're carrying a book around your neck WITHOUT the phone even inside. I hated the look all together, and even the clasp to hold the lanyard on. The microfiber cloth was even thin and useless. This was a complete waste of my time and money. Now I have to go through this stupid process of shipping it off to receive my refund and it is just completely ridiculous I am even dealing with this. If you are thinking about buying this case... DON'T!
阅读更多