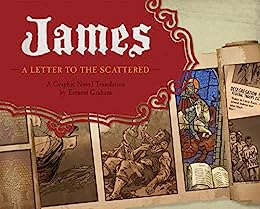 James: A Letter to the Scattered (English Edition) Kindle电子书

An ancient letter that inspired deeds bravery and compassion in millions of lives.

In James: A Letter to the Scattered, Earnest Graham's dramatic illustrations follow women and men around the globe and through time. Follow hunted Christians into Roman catacombs, accompany errands of mercy in modern hospital corridors, see courage and kindness amidst the carnage of the Thirty Years' War, witness the fight for justice in 19th-century Mexico, and march beside protestors in 1960s Alabama.

A Letter to the Scattered, the first in a series of graphic novels from Olive Branch Books, brings the ancient wisdom of the Epistle of James to a new audience.
阅读更多
›  查看更多商品促销信息

Donald B Harris
5.0 颗星，最多 5 颗星 Imaginative and powerful
2014年1月30日 - 已在美国亚马逊上发表
已确认购买
This fits the bill as both good reading and a soft tool of evangelism, When I was a kid I was first introduced to the Old Testament through a "comic book" format. Some of the images remain in my consciousness decades later. The work of Earnest Graham is far superior in content and execution. I can hardly wait for his next volume.
阅读更多
3 个人发现此评论有用