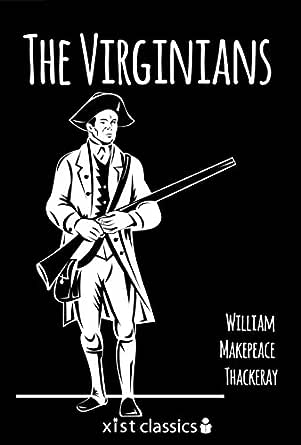 William Makepeace Thackeray was a nineteenth century English novelist who was most famous for his classic novel, Vanity Fair, a satirical portrait of English society. With an early career as a satirist and parodist, Thackeray shared a fondness for roguish characters that is evident in his early works such as Vanity Fair, The Luck of Barry Lyndon, and Catherine, and was ranked second only to Charles Dickens during the height of his career. In his later work, Thackeray transitioned from the satirical tone for which he was known to a more traditional Victorian narrative, the most notable of which is The History of Henry Esmond. Thackeray died in 1863. --此文字指其他 kindle_edition 版本。

Katie Prestwich
3.0 颗星，最多 5 颗星 Ok
2013年7月25日 - 已在美国亚马逊上发表
已确认购买
This book was ok but a little tedious. I really liked the characters at first, but they started to get on my nerves after a while. There was some interesting history and some good parts, but I would say the book as a whole was just average. It is the sequel to the History of Henry Edmond, Esq, and I would recommend reading that first as there are lots of allusions made to events that happened in that book, although this book takes place a while later and has different characters (descendants of characters in Henry Edmond).
阅读更多
1 个人发现此评论有用

eyecon :/ vvv vv7
4.0 颗星，最多 5 颗星 A Novel of Former Times and Style
2015年7月2日 - 已在美国亚马逊上发表
已确认购买
A Novel of a Former Time and style. The story deals with customs and ideals which seem quite dated to today;s reader. Thus, in reading this novel we have a glimpse into thoughts and standards of conduct which are no longer apparent or applicable to our 21st century life. et the desire to have one;s dignity and heritage have survived . this seems to give value and weight to the book.
阅读更多
1 个人发现此评论有用

ED
5.0 颗星，最多 5 颗星 Like this very much!
2019年6月10日 - 已在美国亚马逊上发表
已确认购买
If you like vintage books you'll enjoy this one. Good look at life in another time.
阅读更多

Capt. I. B. Brokenow
3.0 颗星，最多 5 颗星 Big name author! Little book!
2016年1月21日 - 已在美国亚马逊上发表
已确认购买
The book seems more a narrative with any plot deeply embedded in a story line that involves family and national boundaries in a way that only serious readers may follow. However, if you like stories that are difficult (boring?) to follow, this is your book.
阅读更多
加入亚马逊Prime，从此免运费
亚马逊Prime会员可享海外购美/英/日/德跨境免邮，全年无限次！更有免费无限次阅读电子书服务
> 立即加入
了解我们
合作信息
帮助中心和购物指南