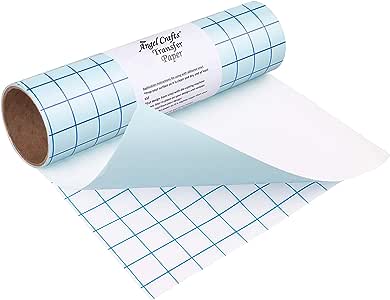 FINALLY a product to help you with positioning your Adhesive Vinyl on any surface is HERE! After you purchase Angel Craft Transfer Paper you will be amazed to see how much you get in ONE ROLL ( 8 FEET LONG), but at an excellent quality too. Go ahead and simply remove the plastic wrapping and you will find easy clear instructions on how to use the paper after cutting your designs or letters with you Provo Craft Cricut machine or perhaps the Silhouette Cameo or Portrait Die Cutter or any other Vinyl Cutter for that matter. So how is Transfer Paper Tape by Angel Crafts different from the rest? It has to be the PREMIUM QUALITY and DESIGNED TO WORK WITH ALL BRANDS, the EASY TO UNWIND & APPLY ALL-PURPOSE APPLICATION, and of course the incredible PRICE. I was tired of buying transfer paper of poor quality and that is why I have manufactured my own that comes with a MONEY BACK GUARANTEE as I am so confident you will love it! Go Ahead and give it a try because adhering Vinyl just got A LOT EASIER! Add to Cart button is above.

Gillian
4.0 颗星，最多 5 颗星 Compared to Oracal brand transfer tape, this tape is best.
2018年7月26日 - 已在美国亚马逊上发表
尺寸: 1包颜色: 透明已确认购买
I had previously purchased the Oracal brand transfer tape for my first time experience using vinyl. It was difficult to use, and such a huge contrast to the Angel Crafts tape. I loved how little effort it took to lift my vinyl from the backing. Worked like an absolute charm.

I have used this now for straight transfer, reverse, and multi-layer designs. Straight transfer is a breeze. The tape lays down nice and flat from the large roll. Backing lifts off perfectly. Lining the grid up is easy enough, though it does show badly when I get it wrong! haha, my fault, not the tape ;D Reverse is a little more complicated as the tape holds really well. So it is a bit more work than I had with the Oracal, but results are good. I'm learning to use this and unlearning the other. But it picked up some of the smaller details that I struggled with the Oracal. Multi-layer has less tack when you go to add the next layer, however, still works beautifully. No problem with air bubbles between the layers so far. And, it was forgiving enough, when I made a mistake, adhering the bottom layer before the top, I was able to gently pry the wrong layer back down to its backing and redo it the right way. The Oracal was much more forgiving, as the tack was so low that the pieces could just come right off.

I have now applied my first vinyl to a vehicle from this tape and it has gone smoothly as well. There was a bit of a curve, but I was able to prevent wrinkling and minimize air bubbles. I am still not very practiced at application, so no fault of the tape either. The tape released the vinyl nicely, however, I may have pulled it off too fast as small corners did lift a little. A small amount of residue, not actual tack, but you could clearly see where the tape was, remained on the glass. A bit of glass cleaner and it was gone (this is when the lifted corners appeared). The used tape had a definite impression of my design left behind and was very curled. Oracal tape lays flat after and can be reused several times (albeit badly). This tape was harder for reuse as it curled so badly. But it does still lift. I have to tape down the edges to be able to use a second time. Not a deal breaker, as most use will be single.

I like that the backing is blue and the tape is clear. Being able to see my design is important for me and my customers who buy my decals. I want this to be easy for them to use. Oracal's backing paper was a very pliable paper lining, whereas the Angel Crafts backing paper is much sturdier. This is perfect for my needs, as most of my decals will be mailed out and I feel more confident that they will arrive nicely. The Oracal tape was easy to get dents or bends in it.

Overall, I am very pleased with my purchase and do plan to buy more in more sizes. I do many smaller decals, so the 6" may be more convenient for me. I still plan to try other brands, but for now, I am sticking with Angel Crafts. They now offer vinyls as well, which I am intrigued to try.

Richard MacAleese
5.0 颗星，最多 5 颗星 Great transfer paper. Love it.
2015年7月4日 - 已在美国亚马逊上发表
尺寸: 1包颜色: 白色已确认购买
Love it. The paper has a low enough opacity that it's very easy to line up the paper with the design, and the 1x1 inch graph makes sizing a breeze when used in conjunction with my digital cutter. Adhesion is just perfectly right between being sticky enough to securely lift my vinyl off it's backing and not so sticky that pieces of vinyl stay stuck to the transfer paper when I remove it after stencil application.

I've only used this with vinyl, and vinyl is the material the product details claim this paper is designed for. It works great with the Craft E brand and the Oracal 631 brand that I've tried it with. The adhesive is almost certainly too strong for any kind of fibrous paper, though. Don't use this for construction paper. You'll destroy your cut.

Tip: When removing any kind of transfer paper from a design after applying the design to your working medium, remove it by peeling back in such a way that the angle where the contact paper lifts off your design is as obtuse as possible. I've attached an image to show what I mean. See how the paper I'm grabbing the paper very close to where it's coming off the "design" and am pulling it all the way back so it's almost folded back on itself? Doing this will help avoid small details of your design sticking to the transfer tape, and this is a handy tip for dealing with any kind of adhesive paper.
阅读更多

Nelson
5.0 颗星，最多 5 颗星 Amazing customer service after a bad expierence.
2016年7月27日 - 已在美国亚马逊上发表
尺寸: 1包颜色: 白色已确认购买
If I could give this zero stars I would! You can't see your work to line it up and the tack is insane. It completely ripped my project! Ugh what a total waste of money! ****Edited: customer service is beyond amazing and they reshipped new paper along with the clear for me to try. The clear is absolutely the way to go! I made three signs last night with it and all turned out well.
阅读更多

Ariana Hazzard
5.0 颗星，最多 5 颗星 Finally, one that works!
2018年3月15日 - 已在美国亚马逊上发表
尺寸: 1包颜色: 透明已确认购买
I've tried a lot of transfer papers for my decal business and had varying success. Finally, I found one that works consistently, even with the most thin and complicated decals! The paper version of this same product also works very well (even better, actually), but I find my customers want the clear version to line up when applying the decal (and I admit they are right, it is much easier). The grid is great for making sure I cut the lines straight when setting up the decal as well, and also helps line it up when applying to make sure it's on straight. At long last, no more wasted time and money on decals that won't transfer! 5/5, will reorder until the end of time.
阅读更多
4 个人发现此评论有用
加入亚马逊Prime，从此免运费
亚马逊Prime会员可享海外购美/英/日/德跨境免邮，全年无限次！更有免费无限次阅读电子书服务
> 立即加入
了解我们
合作信息
帮助中心和购物指南