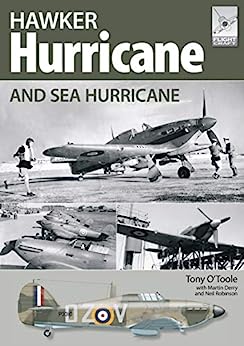 Paul Bradley
5.0 颗星，最多 5 颗星 An excellent read
2016年7月27日 - 已在美国亚马逊上发表
已确认购买
An excellent read with many hitherto unseen photos, with a nice section for the modeller. Please note that the main author is Tony O'Toole, not Neil Robinson, although Neil is a contributor.
阅读更多

Kindle Customer
5.0 颗星，最多 5 颗星 Really good book
2015年9月11日 - 已在美国亚马逊上发表
已确认购买
If you are interested in hurricanes,you're in for a treat. This book covers the entire history of the hawker hurricanes and gives a good overall coverage of the model of hurricanes.
阅读更多

Marco De Montis
5.0 颗星，最多 5 颗星 A good Hurricane's portrait
2015年3月18日 - 已在美国亚马逊上发表
Many times the books treating the great aviation’s classics risk to be boring and adding few compared to the already published books. This is not the case however for the 3rd title in the “Flight Craft” series published by Pen & Sword and devoted to the Hawker Hurricane.
This is due to the successful contamination between a book for modellers and historical enthusiasts.
The Hurricane stands among the “legends of the air” for many reasons. First of all it was the first monoplane RAF’s fighter and also contributed in a decisive way to stop the overwhelming advance of the Nazi’s power especially during the Battle of Britain and in North Africa.
In the first chapters the authors synthesized the historical record of the “Hurri” in all combat theatres with good text and photos and then deepened all intricacies of this legendary fighter through 16 pages with well detailed profiles and plan views depicting 48 different Hurricanes and Sea Hurricanes in service in all the continents not only with RAF but also with many different air forces abroad.
The last chapter (35 pages) is a well written and colour illustrated section with the main Hurricane kits, from the tiny 1/144 scale to the superb 1/24 airfix and Trumpeter ones. In a nutshell a good book fruit of a successful synthesis.
阅读更多
1 个人发现此评论有用
加入亚马逊Prime，从此免运费
亚马逊Prime会员可享海外购美/英/日/德跨境免邮，全年无限次！更有免费无限次阅读电子书服务
> 立即加入
了解我们
合作信息
帮助中心和购物指南