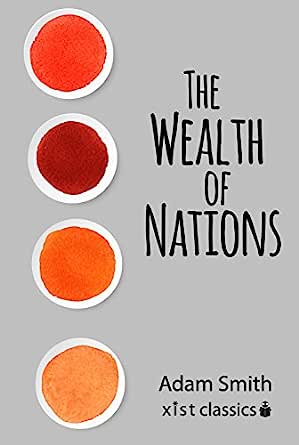 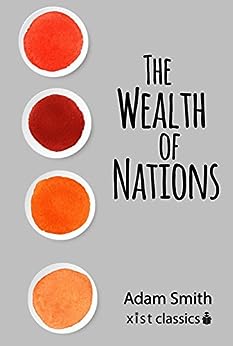 From the Back Cover
Adam Smith's enormous authority resides, in the end, in the same property that we discover in Marx: not in any ideology, but in an effort to see to the bottom of things.
--Robert L. Heilbroner

Introduction vii Book I Of the Causes of Improvement in the Productive Powers of Labor, and of the Order According to Which Its Produce Is Naturally Distributed among the Different Ranks of the People Of the Division of Labor 1 Of the Principle which Gives Occasion to the Division of Labor 10 That the Division of Labor Is Limited by the Extent of the Market 14 Of the Origin and Use of Money 19 Of the Real and Nominal Price of Commodities, or of Their Price in Labor and Their Price in Money 23 Of the Component Parts of the Price of Commodities 30 Of the Natural and Market Price of Commodities 38 Of Wages and Profit in the Different Employments of Labor and Stock 48 Book IV Of Systems of Political Economy Introduction 61 Of the Principle of the Commercial of Mercantile System 62 Of the Agricultural Systems, or of Those Systems of Political Economy, which Represent the Produce of Land, as Either the Sole or the Principal Source of the Revenue and Wealth of Every Country 87 Book V Of the Revenue of the Sovereign or Commonwealth Of the Expenses of the Sovereign or Commonwealth 89 Bibliography 116 --此文字指其他 kindle_edition 版本。

''Adam Smith's enormous authority resides, in the end, in the same property that we discover in Marx: not in any ideology, but in an effort to see to the bottom of things.'' --Robert L. Heilbroneri

ADAM SMITH was born in a small village in Kirkcaldy, Scotland in 1723. He entered the University of Glasgow at age fourteen, and later attended Balliol College at Oxford. After lecturing for a period, he held several teaching positions at Glasgow University. His greatest achievement was writing The Wealth of Nations (1776), a five-book series that sought to expose the true causes of prosperity, and installed him as the father of contemporary economic thought. He died in Edinburgh on July 19, 1790. --此文字指其他 kindle_edition 版本。

moFrom the introduction by Robert Reich

Adam Smith's ideas fit perfectly with this new democratic, individualistic idea. To him, the "wealth" of a nation wasn't determined by the size of its monarch's treasure or the amount of gold and silver in its vaults, nor by the spiritual worthiness of its people in the eyes of the Church. A nation's wealth was to be judged by the total value of all the goods its people produced for all its people to consume. To a reader at the start of the twenty-first century, this assertion may seem obvious. At the time he argued it, it was a revolutionary democratic vision.

Smith was born in 1723, in the small Scottish port of Kirkcaldy, which sits across the Firth of Forth from Edinburgh. His father was a collector of customs?a job that literally embodied the old mercantilist philosophy that Smith would later argue against. He was educated at the University of Glasgow, whose professors passionately debated the new concepts of individualism and ethics (one of his teachers, Francis Hutcheson, was prosecuted by the Scottish Presbyterian church for spreading the "false and dangerous" doctrines that moral goodness could be obtained by promoting happiness in others and that it was possible to know good and evil without knowing God), and then at Oxford, whose professors didn't debate or teach much of anything. In fact, the lassitude of Oxford's dons prompted Smith to suggest, in The Wealth of Nations, that professors be paid according to the number of students they attract, thereby motivating them to take a more lively interest in teaching?one of Smith's few suggestions with which today's tenured professors of economics generally disagree.

In 1748 Smith returned to the University of Glasgow, first as a professor of logic and then of moral philosophy, filling Francis Hutcheson's chair. There he published The Theory of Moral Sentiments in 1759, which brought him instant fame. In it, Smith asked how a normal self-interested person is capable of making moral judgments, when the essence of morality is selflessness. It was a question that troubled many of the new thinkers of the eighteenth century, who had liberated themselves from both theology and codes of aristocratic or chilvaric virtue. Smith's answer foreshadowed Sigmund Freud's superego: People possess within themselves an "impartial spectator" who advises them about moral behavior.

Smith resigned his professorship in 1764 to become tutor to the son of the late Duke of Buccleuch. The boy's mother, Countess of Dalkeith, had just remarried Charles Townshend, one of Smith's many admirers, who later became Britain's chancellor of the exchequer, and was responsible for imposing the taxes on the American colonies that prompted some Bostonians to throw large quantities of tea into Boston Harbor. For the next two years, Smith traveled throughout the Continent, beginning work on the book that was to become The Wealth of Nations. He visited Voltaire in Geneva, and in Paris met François Quesnay, a physician in the court of Louis XV who had devised a chart of the economy?a "tableau economique" he called it?showing the circulation of products and money in an economy analogous to the flow of blood through a body. Quesnay and his fellow Physiocrats believed that wealth came from a nation's production that enlarged the flow rather than from its accumulation of gold and silver, as the prevailing mercantilists believed, and that governments should therefore remove all impediments to the flow of money and goods in order to increase production.
Smith took these notions to heart, although he didn't agree with everything the Physiocrats propounded (such as their view that agricultural production was the only true source of wealth). Returning to Glasgow in 1766, he spent the better part of the following decade working out his theories. Occasionally he'd travel to London to discuss them with luminaries such as the philosopher Edmund Burke, historian Edward Gibbon, Benjamin Franklin (visiting from America), and the remarkable personalities Samuel Johnson and James Boswell. Smith's book finally appeared on March 9, 1776, in two volumes, and went through several subsequent editions. It was well received, although not an immediate sensation. Smith spent his remaining years back in Edinburgh as commissioner of customs, the same kind of mercantilist sinecure his father had held, and died in July 1790, at the age of sixty-seven.

The Wealth of Nations is resolutely about human beings?their capacities and incentives to be productive, their overall well-being, and the connection between productivity and well-being. In the very first sentence of his Introduction, Smith takes aim at the mercantilists and declares, "The annual labour of every nation is the fund which originally supplies it with all the necessaries and conveniences of life. . . ." And two paragraphs later he states that a nation's wealth grows because of "the skill, dexterity, and judgment with which its labour is generally applied. . . ." Smith's concern about all of a nation's working people is evident. In a wealthy nation "a workman, even of the lowest and poorest order, if he is frugal and industrious, may enjoy a greater share of the necessaries and conveniences of life than it is possible for any savage to acquire." In the rest of the book he explains why this is so.
While The Theory of Moral Sentiments showed how normal, self-interested people could make moral judgments by consulting an internal "impartial spectator," in The Wealth of Nations Smith explains how such people will automatically contribute to the well-being of others even absent such consultations, simply by pursuing their own ends. "It is not from the benevolence of the butcher, the brewer, or the baker, that we expect our dinner," writes Smith, in one of the most frequently cited passages in the history of economic thought, "but from their regard to their own interest. We address ourselves, not to their humanity but to their self-love. . . ." With several strokes of his pen, Smith thereby provided a moral justification for motives that had been morally suspect in Western thought for thousands of years.

How can self-interested behavior?the "private interests and passions" of men Smith calls them?lead to the good of the whole? By means, he says, of an "invisible hand"?perhaps the most famous, or infamous, bodily metaphor in all of social science. By an "invisible hand" Smith does not mean a mystical force; he is referring to an unfettered market propelled both by competition among self-interested sellers and by buyers seeking the best possible deals for themselves. If sellers produce too little of something to meet buyers' demands, for example, the price of the product will rise until other sellers step in to fill the gap. If some sellers charge too high a price to begin with, others will step in and charge a lower one.

Unimpeded, the invisible hand will allocate goods efficiently. But the key to wealth creation, for Smith, comes in the division of labor?by which individuals specialize in doing or producing a particular thing. Smith famously illustrates this principle by reference to the making of pins within the kind of small factory that characterized the early years of the Industrial Revolution. "One man draws out the wire, another straights it, a third cuts it, a fourth points it, a fifth grinds it at the top for receiving the head; to make the head requires two or three distinct operations . . . ," he explains. "I have seen a small manufactory of this kind where ten men only were employed . . . [who] could make among them upwards of forty-eight thousand pins a day." He contrasts this with the likely output of individuals who tried to make the entire pins themselves. "[I]f they had all wrought separately and independently . . . they certainly could not each of them have made twenty, perhaps not one pin in a
day. . . ."

Specialization improves productivity because it allows workers to become more skilled in their specific tasks, motivates them to discover more efficient means of doing them, and saves them the time of changing over to different tasks. Here, Smith noticed something that modern managers often overlook: Innovation often begins with the workers closest to the things being worked upon. "A great part of the machines made use of in those manufactures in which labour is most subdivided, were originally the inventions of common workmen, who, being each of them employed in some simple operation, naturally turned their thoughts towards finding out easier and readier methods of performing it."

In order to reap the full benefits of specialization, the market must be sufficiently large. After all, there's little point in creating forty-eight thousand pins if there aren't enough people to buy them. The larger the market, the greater the opportunities for specialization. It follows that barriers to trade, within a nation or between nations?regulations, licenses, tariffs, quotas, and other market protections?reduce potential wealth. At the extreme, the necessity of self-sufficiency causes hardship, as in "the lone houses and very small villages which are scattered about in so desert a country as the Highlands of Scotland, [where] every farmer must be butcher, baker, and brewer for his own family." --此文字指其他 kindle_edition 版本。
阅读更多