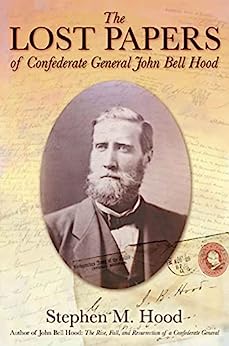 The historical community long believed General Hood’s papers were lost or destroyed, and numerous books and articles were written about him without the benefit of these invaluable documents. In fact, the papers were carefully held for generations by a succession of Hood’s descendants, and in the autumn of 2012 transcribed by collateral descendent Sam Hood as part of his research for his book John Bell Hood: The Rise, Fall, and Resurrection of a Confederate General (Savas Beatie, 2013.)

This collection offers more than 200 documents. While each is a valuable piece of history, some shed important light on some of the war’s lingering mysteries and controversies. For example, several letters from multiple Confederate officers may finally explain the Confederate failure to capture or destroy Schofield’s Union army at Spring Hill, Tennessee, on the night of November 29, 1864. Another letter by Lt. Gen. Stephen D. Lee goes a long way toward explaining Confederate Maj. Gen. Patrick Cleburne’s gallant but reckless conduct that resulted in his death at Franklin. Lee also lodges serious allegations against Confederate Maj. Gen. William Bate. While these and others offer a military perspective of Hood the general, the revealing letters between he and his beloved and devoted wife, Anna, help us better understand Hood the man and husband.


Historians and other writers have spent generations speculating about Hood’s motives, beliefs, and objectives, and the result has not always been flattering or even fully honest. Now, long-believed “lost” firsthand accounts previously unavailable offer insights into the character, personality, and military operations of John Bell Hood the general, husband, and father.

Stephen M. "Sam" Hood is a graduate of Kentucky Military Institute, Marshall University (bachelor of arts, 1976), and a veteran of the United States Marine Corps. A collateral descendent of General John Bell Hood, Sam is a retired industrial construction company owner, past member of the Board of Directors of the Blue Gray Education Society of Chatham, Virginia, and is a past president of the Board of Directors of Confederate Memorial Hall Museum in New Orleans. Sam resides in his hometown of Huntington, West Virginia and Myrtle Beach, South Carolina with his wife of thirty-five years, Martha, and is the proud father of two sons: Derek Hood of Lexington, Kentucky, and Taylor Hood of Barboursville, West Virginia.

Peter J. D'Onofrio
5.0 颗星，最多 5 颗星 John Bell Hood Redeemed
2015年4月8日 - 已在美国亚马逊上发表
已确认购买
The Lost Papers is Stephen Hood’s second volume about his ancestor, General John Bell Hood. In his previous book, John Bell Hood: The Rise, Fall, and Resurrection of a Confederate General, the author examines the myths and falsehoods surrounding the last couple of years of the general’s military career. In this volume, through the availability of more than 250 letters, images, keepsakes and other items that belonged to General Hood, Stephen Hood presents the primary sources from the general’s contemporaries that debunk each and every falsehood that such “eminent, professional” historians such as Wiley Sword, Thomas Connelly, Stanley Horn, David Eicher, Webb Garrison, Jr., and several others. These so-called historians were more interested in making money than presenting a true, unbiased picture of a Southern gentleman and hero. These historians present innuendo, statements without a shred of evidence other than false statements written by previous “historians.”
What is of particular interest to this reviewer, who is a Civil War medical re-enactor and writer, are the two medical reports written by Dr. John T. Darby concerning Hood’s wounds suffered at Gettysburg and Chickamauga. The first, on the Gettysburg wound, is about 1600 words. The second, due to the very nature of the wound, is 3500 words and covers the period September 23 to November 24, 1863.
Author Hood looks at the “controversies” surrounding the general’s promotions, the Atlanta Campaign, the Cassville affair, Spring Hill, Franklin, and Nashville. Presented are letters and documents from General Hood’s peers, subordinates, and superiors. In no instance do any of these personages suggest that Hood was dependent on narcotics and/or alcohol. None suggest that he was drunk at the time of Spring Hill or unstable due to laudanum at Franklin or Nashville as many so-called historians have insinuated.
To get a true picture of this Confederate hero, one must read The Lost Papers and it is highly recommended that the reader also acquire John Bell Hood: The Rise, Fall, and Resurrection of a Confederate General.
Reviewed by Peter J. D’Onofrio, Ph.D.
President, Society of Civil War Surgeons, Inc.
阅读更多
7 个人发现此评论有用