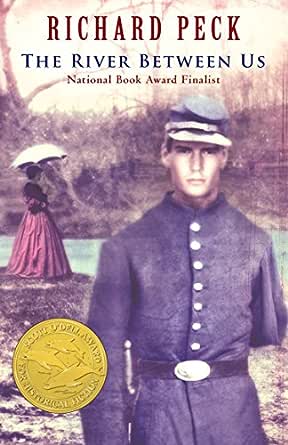 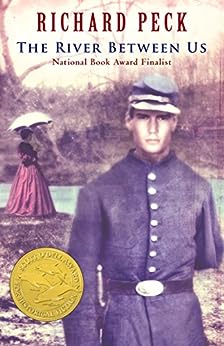 The River Between Us (English Edition) Kindle电子书

From Booklist
Gr. 7-12. At the start of the Civil War two mysterious young women get off a boat in a small town in southern Illinois, and 15-year-old Tilly Pruitt's mother takes them in. Who are they? Is the darker-complexioned woman the other woman's slave? Tilly's twin brother, Noah, falls in love with one of them--rich, stylish, worldly Delphine, who shows Tilly a world of possibilities beyond her home. When Noah runs away to war, Tilly and Delphine go after him, find him in the horror of an army tent hospital, and bring him back; but their world is changed forever. Peck's spare writing has never been more eloquent than in this powerful mystery in which personal secrets drive the plot and reveal the history. True to Tilly's first-person narrative, each sentence is a scrappy, melancholy, wry evocation of character, time, and place, and only the character of Delphine's companion, Calinda, comes close to stereotype. A final historical note and a framing device--a grandson writing 50 years after the story takes place--make the reading even better, the revelations more astonishing. It's a riveting story that shows racism everywhere and young people facing war, not sure what side to be on or why. For companion books, see "Civil War--An Update" in the September 2003 issue of Book Links . Hazel Rochman
Copyright © American Library Association. All rights reserved

From School Library Journal
Grade 7 Up-This historical novel set at the beginning of the Civil War actually opens in 1916, as 15-year-old Howard Leland Hutchings recounts his trip in a Model T to visit his father's childhood home in Grand Tower, IL. When he and his younger brothers meet the four elderly people who raised their father, the novel shifts to 1861, and the narrator shifts to 15-year-old Tilly Pruitt, the boys' grandmother. When a steamboat from New Orleans brings two mysterious young ladies, Mama offers them room and board, and the Pruitts' lives are forever changed. Fair and beautiful Delphine Duval, with her fancy dresses and high-society ways, fascinates the family. And what of Calinda, the darker-skinned young woman? Could she be Delphine's slave? On the eve of his 16th birthday, Tilly's twin brother, Noah, leaves to join the Union troops at Camp Defiance and Mama, distraught, sends Tilly and Delphine to bring him home. It is here that Tilly learns of Delphine's heritage. She is a quadroon, part of the colored family of a rich white man. Her mother sent her daughters away from New Orleans, hoping Delphine can pass for white. The novel ends with a return to 1916 and Howard's finding out his father's true parentage. In this thoroughly researched novel, Peck masterfully describes the female Civil War experience, the subtle and not-too-subtle ways the country was changing, and the split in loyalty that separated towns and even families. Although the book deals with some weighty themes, it is not without humor. A scene involving strapping on a corset is worthy of Grandma Dowdel herself.
Connie Tyrrell Burns, Mahoney Middle School, South Portland, ME
Copyright 2003 Reed Business Information, Inc. --此文字指 hardcover 版本。

Richard Peck has won almost every children's fiction award, including the Newbery Medal, and he has recently received a National Humanities Medal from the White House. --此文字指 hardcover 版本。
click to open popover

S. Werkema
5.0 颗星，最多 5 颗星 Enlightening and absorbing
2019年5月1日 - 已在美国亚马逊上发表
已确认购买
The River Between Us is filled with clear, evocative language, fascinating characters, and absorbing plot details. I cared what happened to the characters, and I learned a lot about the strains of living in a border region during the Civil War. Some of the cultural nuances I had not previously encountered, and I sympathized with those who had to walk very narrow lines. The difficulties for free people of color in the South were new to me; I value what I learned from their story. The River Between Us is an excellent, enlightening book.
阅读更多
4 个人发现此评论有用

Sydney
5.0 颗星，最多 5 颗星 Great storytelling
2018年3月3日 - 已在美国亚马逊上发表
已确认购买
Aside from the subject matter being unique, the take is so well told. It might bee aimed at young adults but as an older adult with less patience for thick or complicated novels, the clarity and consistency of the through line enchanted me.
阅读更多
6 个人发现此评论有用