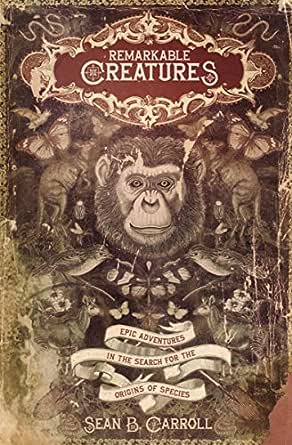 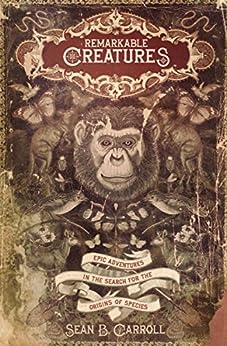 Remarkable Creatures: Epic Adventures in the Search for the Origins of Species (English Edition) Kindle电子书

'This year's double Darwin anniversary has inspired an outpouring of excellent books. This may be the best of all.' Financial Times. (Financial Times)

'A bracing tonic for those whose rational enjoyment of the natural universe currently seems in danger of being overwhelmed by the strident infantilism of creationists' Spectator. (Spectator)

'Sean Carroll is... a forceful public advocate for biological science as one of the glories of our culture... As Remarkable Creatures vividly shows, this is not yet another trip down the heritage nostalgia trail but the celebration of a vital tradition' Daily Mail. (Daily Mail)

Leaves you with an overwhelming sense of awe and respect for the most remarkable of creatures, the men and women who … gave us a profound sense of place among life on Earth - Guardian. (Guardian) --此文字指其他 kindle_edition 版本。

Sean B. Carroll is an Investigator at the Howard Hughes Medical Institute and Professor of Genetics at the University of Wisconsin-Madison. His scientific discoveries have been featured in Time and The New York Times, and Carroll himself has written articles for Natural History and Playboy. His first book, Endless Forms Most Beautiful was a 2005 Top Popular Science Book of the Year (USA Today). He and his wife and children reside in Madison, Wisconsin. --此文字指其他 kindle_edition 版本。

Sandra Iler Kirkland
5.0 颗星，最多 5 颗星 Fascinating Research Into The Heroes Of Evolution And Exploration
2012年4月21日 - 已在美国亚马逊上发表
已确认购买
In Remarkable Creatures, Sean Carroll takes the reader on a lively tour of the discoveries in evolution, biology, genetics, archeology, geology and scientific dating that have revolutionized the thinking about how man appeared on earth and changed over the years. Carroll is a professor of molecular biology and genetics and an investigator with the Howard Hughes Medical Institute at the University of Wisconsin, and a member of the National Academy of Sciences.

The book is structured in three areas. The first talks of the beginnings of the theory of evolution with chapters on Darwin and on Alfred Wallace (Amazon explorations) and Henry Walter Bates. The second group of chapters discusses the role of fossils and the lengths and privations taken to obtain them, as well as the conclusions reached from them. The final group of chapters talks about the human evolution from the cradle of life in Africa to the Neanderthal chapter and the scientists such as Leakey who pioneered this work. It ends with the new role that molecular biology is playing with providing more exact dates when various life forms existed and the genetic relationships between various forms.

This book is recommended for curious readers who want to know more about how we know what we know. It is an overview of the area and highlights the various scientists who advanced knowledge, providing a look at the human side of their lives as well as the scientific discoveries they made. The privations and enthusiasm these individuals displayed as well as the total focus they had on their life work is an amazing characteristic that all shared. Carroll has done an excellent job in explaining the overall theories of life without drowning in the details, providing enough information for those who want to delve more deeply.
阅读更多
2 个人发现此评论有用

Snkmn
5.0 颗星，最多 5 颗星 Very pleasant read
2017年10月25日 - 已在美国亚马逊上发表
已确认购买
These are short biographies of important people in the understanding of life on earth, especially human life. If you have an interest in the the process of discovery and synthesis of information then read it. No women (except Mary Leakey) or minorities included in the book- maybe the author will write another and include more.
In any case, I read it in one sitting.
阅读更多
加入亚马逊Prime，从此免运费
亚马逊Prime会员可享海外购美/英/日/德跨境免邮，全年无限次！更有免费无限次阅读电子书服务
> 立即加入
了解我们
合作信息
帮助中心和购物指南