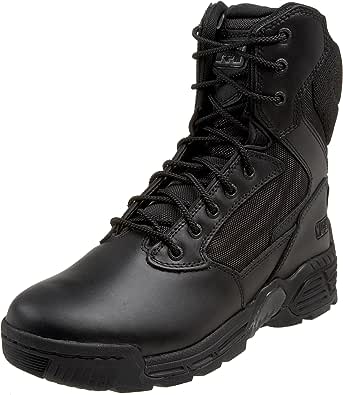 T. J. Young
4.0 颗星，最多 5 颗星 these are still the best boots around
2016年3月4日 - 已在美国亚马逊上发表
已确认购买
I have purchased these boots numerous times over the last 5 years because of the quality and durability. As a LEO, I wear these boots almost daily and the last pair ended up lasting me 2 years which is far longer than most manufacturers. I've tried everything under the sun from Walmart generic boots, to the top of the line Bates, 5.11 and everything in between. I have piles of boots collecting dust in my house and keep coming back to these.

The last pair I recently bought I started giving me issues. Makes me feel as though they're being made differently and losing that quality. Now when I wear them, a portion of my right foot (on the top between the toes and the ankle) goes numb. This has never happened before in 10+ years of wearing boots. New Magnum boots never did this, nor did any other manufacturer. Nothing changed in how I wear them... but this one pair is causing a lot of discomfort. I thought maybe it just needed to be broken in... but have been wearing them almost daily for over a month.

I've bought both the "regular" and "wide" versions of these boots before and I've really never noticed a difference. The last pair was regular, and the pair before that was wide. The wide ones were ruined when I had to jump into water (river) which completely destroyed them (they essentially blew up in size). But the last regular pair I wore through rain, snow, etc and never had an issue with them. The breaking in process was simple and painless, unlike this pair (I made sure I ordered the exact same boot on Amazon too, coming back to the same product page). Not sure what's going on with the quality of these.

Anyway... my new problem aside... these are still the best boots around. I probably would still be wearing my old pair if the soles hadn't worn out. I had almost no traction on them and ended up falling on some ice nearly causing some very serious damage to my knee. These boots are truly the most comfortable (or used to be), the best for that surprise moment of running, good for climbing obstacles, and longest lasting on the market. Like I said before... I've tried almost every boot out there (I still want to try the "Original SWAT" boot and a few of those "premium" $125+ boots)... but these are just hard to beat for around $100. Hopefully this pair lasts 2 years again.

Amazon Customer
2.0 颗星，最多 5 颗星 First pair was better
2014年9月16日 - 已在美国亚马逊上发表
已确认购买
I recently purchased a pair of these and have worn them for about three months on patrol. First let me say that I owned a pair of these for 4 years and walked literally thousands of miles of patrol in them with no problems. That pair was great so when it started to deteriorate I bought my current pair through amazon. Initially as with most boots I went through the week of wearing the material in. However, the material just did not seem to conform to my foot as well as my last pair. I continued to wear them despite minor discomfort at the end of the shift. Yesterday, when assisting some persons with a heavy lift I felt a portion of the bridge give way in the boot. Now when I walk what feels like a piece of the shank or bridge support juts upwards into my arch. It is becoming excruciating and after inspection I think it may be irreparably damaged. This is disappointing, but in all honesty this pair was not of the same quality as my last. The leather despite being polished and well kept wrinkled and creased in ways that make it look years worn.
After this experience I will be searching for a new boot.
阅读更多
23 个人发现此评论有用

Brenda Davis
4.0 颗星，最多 5 颗星 Just like I like it!
2020年5月7日 - 已在美国亚马逊上发表
已确认购买
6 yrs ago I was issued a pair of these boots at the jail I work at and over these last 6 yrs I have worn these boots out. I put in an order for a new pair of boots and was given a new pair of Danner Scorch side zip boots and let me tell ya, those things tore up the back of my ankles to the point where after one use I decided to not wear them anymore they felt that bad on my feet. I went back to wearing my original pair of Magnums and decided to buy a new pair of Magnums with my own money as the jail I work for no longer issues that brand. I wear a size 8.5 in my usual womens shoes so I went with a size 7 mens with these. A world of difference from the Danners! I am so glad I decided to get another pair of these Magnums cuz I just couldn't do it with the Danners. The only sort of downside with these Magnums is I have a EEE width and these are a tiny bit tight in the width but I know they'll stretch out and it won't be a problem for long.
阅读更多
1 个人发现此评论有用

Nobody
1.0 颗星，最多 5 颗星 Extremely Dissappointed
2020年1月11日 - 已在美国亚马逊上发表
颜色: 黑色尺寸: 12 C/D US已确认购买
In 2005 I bought my first pair of Magnum Stealth II boots, wore them out of the store. I didn't take them off until 14 hours later when I was heading to bed, that's when I realized I was still wearing them. About one month later I bought 3 more pairs and 4 pairs of their predecessors, Stealth boots. A year ago the last pair of those Stealth boots wore out.

I thought with great comfort and reliability the new Stealth's would be just as great, yep, I was wrong.

This was the second pair of Magnum boots I bought last year, both disappointed me. The first pair developed an odor that only came from those boots, none of the other shoes/boots had that odor, I had to throw those away.

First the fit, I found these to be loose even though these are to fit my 12ee feet. After about an hour on the job, custodial work, I have to remove the boots and reposition my socks, the socks become loose and turned, after putting the boots back it takes about another hour that I have to repeat the process. By the end of the day my feet ache for hours. Once home I can't wait to take the boots off. I have tried different inserts in hopes they would help, they didn't.

These boots have developed a squeaking problem, some of the buildings I work in contain research labs, the people in the buildings know when I'm coming due to the boots, the boots make more noise than the keys on my belt loop or the trash barrel or cart I'm pushing. A couple of times I heard the boots when walking on concrete outside.

The toes of the boots were missing some finish after the first day on the job.