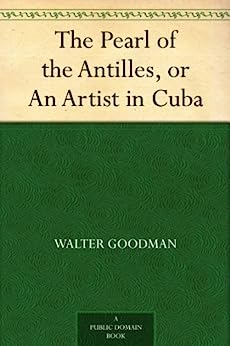 The Pearl of the Antilles, or An Artist in Cuba (English Edition) Kindle电子书

英语版本 Walter Goodman (作者) 格式: Kindle电子书
|
分享
分享 <分享样章>
广告
显示所有 格式和版本 隐藏其他格式和版本
This book was converted from its physical edition to the digital format by a community of volunteers. You may find it for free on the web. Purchase of the Kindle edition includes wireless delivery.
阅读更多
Previous page
Next page
›  查看更多商品促销信息

tachi1
5.0 颗星，最多 5 颗星 A snapshot of a long-ago place and time.
2011年6月4日 - 已在美国亚马逊上发表
已确认购买
This is a charming and entertaining eye witness snapshot of a particular time and place in Cuban history. It is written by an observant English artist who, with an artist's eye and typically dry English wit, observes Cuban customs in Santiago while it was still under oppressive Spanish rule.

As a Cuban-American, I particularly enjoyed reading how typical and unique Cuban foibles, faults, virtues, customs, and character traits look to a foreigner. It was fascinating to see how and why many of the traditions that were handed down to me by my grandparents got started or for how long they've existed. It was disturbing to see eyewitness accounts of slavery and discrimination. These incidents are told from his point of view and from the points of view of various levels of a society which was increasingly condemning of the practice. It was reassuring to know that social consciousness and common decency have always existed (as have their opposites).

Very little escapes his notice and everything is recorded in a matter-of-fact way without giving personal opinions on the subject or event. It is more a report than an editorial. Although some historical events were witnessed, the majority of the book pertains to social matters and customs which are observed with wonder, curiosity, respect, and an obvious and growing affection for the country and the people he met there.

I found it a pleasure from start to finish.

Ricardo Vacilon
5.0 颗星，最多 5 颗星 Plus ca change plus c'est la meme chose
2012年12月4日 - 已在美国亚马逊上发表
已确认购买
Cuban society has changed, but not enough to make it unrecognizable to someone like Walter Goodman who traveled there in the late 1860s. One could still travel to Cuba today and have a Goodmanian experience, if one were so inclined. Goodman, who considered himself an artist, missed his calling as a travel writer.
阅读更多
1 个人发现此评论有用