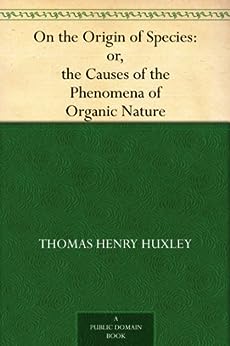 On the Origin of Species: or, the Causes of the Phenomena of Organic Nature (English Edition) Kindle电子书

英语版本 Thomas Henry Huxley (作者) 格式: Kindle电子书
|
分享
分享 <分享样章>
| 人气
广告
显示所有 格式和版本 隐藏其他格式和版本
This book was converted from its physical edition to the digital format by a community of volunteers. You may find it for free on the web. Purchase of the Kindle edition includes wireless delivery.
阅读更多
›  查看更多商品促销信息

Johnny F.
5.0 颗星，最多 5 颗星 everyone talks about Darwin... but guess where ...
2016年4月4日 - 已在美国亚马逊上发表
已确认购买
everyone talks about Darwin...but guess where Darwin got the basis for the concept. A must read for everyone, from the fervent science supporter to the anti-evolution types. Remember, one has no valid complaint unless one has actually bothered to read the material first.
阅读更多
1 个人发现此评论有用

Steven H Propp
5.0 颗星，最多 5 颗星 HUXLEY'S EARLY EXPLANATION OF DARWIN BEFORE A POPULAR AUDIENCE
2014年5月20日 - 已在美国亚马逊上发表
Believe it or not, in earlier times people didn't just go home after work and "veg out" in front of the television; frequently, they would go out to listen to some rather stimulating and provocative lectures. This book is a collection of such "Working Men's Lectures" (originally entitled, "The Causes of the Phenomena of Organic Nature"; only the final lecture is specifically devoted to Darwin's Origin of Species) that were presented in 1862 by English biologist Thomas Henry Huxley (1825-1895), who was often called "Darwin's Bulldog" because of his spirited advocacy of Darwin's theory of evolution.

Huxley begins these six lectures by noting that "there is a close relation between the organic and the inorganic world---the difference between them arising from the diverse combination and disposition of identical forces, and not from any primary diversity, as far as we can see," and that "not only is the living matter derived from the inorganic world, but that the forces of that matter are all of them correlative with and convertible into those of inorganic nature." He then develops the evidence (now thought much less of) from embryology, stating, "there is a time when the embryos of neither dog, nor horse, nor porpoise, nor monkey, nor man, can be distinguished by any essential feature one from the other; there is a time when they each and all of them resemble this one of the Dog."

He admits objections to Darwin's theory, but asserts that "the man of science replies to objections ... by pointing to that immense mass of facts which have been ascertained and systematized ... He sees an enormous mass of facts and laws relating to organic beings ... (that) have shown themselves capable of yielding to scientific investigation, we may accept this as proof that order and law reign as well as in the rest of nature; and the man of science says nothing to objectors of this sort, but supposes that we can and shall walk to the origin of organic nature, in the same way that we have walked to a knowledge of the laws and principles of the inorganic world."

He frankly admits that no one has come close to synthetically taking inorganic matter and building it up into organic matter such as Protein, "I suspect it will be a long while before anybody does do it.... But the thing is by no means so impossible as it looks; for the researches of modern chemistry have shown us---I won't say the road towards it, but, if I may so say, they have shown the finger-post pointing to the road that may lead to it."

"If you regard the whole series of stratified rocks ... if you observe in these successive strata of rocks successive groups of animals arising and dying out, a constant succession, giving you the constant kind of impression, as you travel from one group of strata to another ... when you find this constant succession of forms, their traces obliterated except to the man of science---when you look at this wonderful history, as ask what it means, if it only a paltering with words if you are offered the reply, `They were so created.'"

He even suggests a manner that Darwin's theory could be falsified: "if it could be proved, not only that this HAS not been done, but that it CANNOT be done; if it could be demonstrated that it is impossible to breed selectively, from any stock, a form which shall not breed with another, produced from the same stock; and if we were shown that this must be the necessary an inevitable result of all experiments, I hold that Mr. Darwin's hypothesis would be utterly shattered."

Huxley does not accept every assertion of Darwin, however: "I have no doubt that Mr. Darwin's hypothesis will be found competent to explain the majority of the phenomena exhibited by species in nature; but in an earlier lecture I spoke cautiously with respect to its power of explaining all the physiological peculiarities of species."

Nevertheless, he concludes that "I really believe that the alternative is either Darwinism or nothing, for I do not know of any rational conception or theory of the organic universe which has any scientific position at all beside Mr. Darwin's.... Whatever may be the objections to his views, certainly all others are absolutely out of court."

This book will be of interest to anyone interested in the history and development of evolutionary theory.