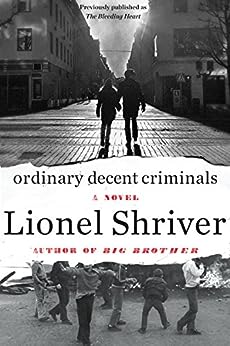 A new edition of one of bestselling author Lionel Shriver’s early novels, reissued 25 years after first publication—an engrossing commentary on the intersection of politics and human relationships, set in turbulent Northern Ireland.

For ten years, Estrin Lancaster has fled Philadelphia. From the Philippines to Berlin, she’s been a traveler without a destination, an expatriate without a motherland. In each of the cities Estrin favors, she manages an apartment, a job, a lover, and never tarries past the first signs of ennui.

Her latest destination is Belfast, in Northern Ireland. After twenty years of ritualized violence, this city, too, is exhausted—a town where when one more bomb explodes in the city center, old ladies blow the dust off their treacle cakes and count their change. Here the lanky and spiteful Farrell O’Phelan, former purveyor of his own bomb-disposal service, technically Catholic but everyone’s aggravation, wrangles through the maze of factions in the North by despising every side. Farrell’s affair with the curious Estrin is nonetheless a meeting of two loners; like hers, Farrell’s marathoning around the planet has become a running in place. In deadlocked Northern Ireland, it has become harder and harder to believe that anything is happening at all.

A grand tragi-comedy—one of the earliest displays of the ambition and intelligence that has since earned Lionel Shriver worldwide acclaim—Ordinary Decent Criminals is about conflict groupies, people terrified of domesticity, who stir up anguish in their lives and their countries to avoid the greater horror of what lies closest to home.

‘Shriver proves she is not afraid of anything…’
Observer

Lionel Shriver's novels include The New Republic, the National Book Award finalist So Much for That, the New York Times bestseller The Post-Birthday World, and the Orange Prize winner We Need to Talk About Kevin. Her journalism has appeared in the Guardian, the New York Times, the Wall Street Journal, and many other publications. She lives in London and Brooklyn, New York.

Cathy H.
1.0 颗星，最多 5 颗星 Not her best
2017年8月26日 - 已在美国亚马逊上发表
已确认购买
I've read several of Shriver's novels, and enjoyed them all very much. I could not get into this book at all. I read the first chapter, and was completely confused. I started on the second chapter, hoping for some clarity and ah-ha moments. Instead I was faced with all new characters and more confusion. I gave up halfway through chapter two.
阅读更多

katj
2.0 颗星，最多 5 颗星 Simply CANNOT get into this book!!
2021年8月30日 - 已在美国亚马逊上发表
Lionel Shriver is probably my favourite living author - I usually love and devour all her books; this one I just CANNOT get into!! I tried several times, still only at about 28% and cannot muster the effort to keep reading (especially when there are so many other books around!!). I should probably just do myself a favour and delete it so that I don't have to keep feeling about not continuing it.........
阅读更多