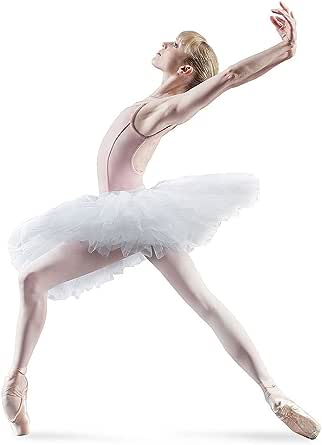 Emorie
5.0 颗星，最多 5 颗星 Great thus far
2016年5月13日 - 已在美国亚马逊上发表
已确认购买
So far this seems to be a great quality tutu!
I will be entirely honest here: I am not a dancer by any means nor have I ever owned a French tutu to compare, but I am an avid cosplayer and felt that a quality tutu was needed one for a character I'll be portraying next spring.
That being said, here is my reveiw so far:
I have been in the market for a quality French tutu for a couple of months now, I know that there are plenty of tutu's out there that would have been much cheaper for costuming purposes, but I didn't want to cut corners. I needed a tutu that could hold its shape and look authentic so I took a chance on this one.
So, packaging: the tutu came in a bag, or more specifically, three layers of thin but firm plastic bag, and was rolled into a burrito-type wrap in the innermost bag. Something worth noting: it was burrito wrapped inside out so that it would still stick out straight when worn.

Out of bag condition: I had seen one review for this tutu mentioning extreme wrinkling, and yeah there are some wrinkles but only the amount that one should logically expect there to be, nothing (in my opinion) terribly damaging. I put the tutu on shortly after opening it to get a feel for what it's like which leads us to

Fit: I ordered a small based on the standard amazon sizing chart and it fits as expected. I saw a response from the seller in the questions section on Amazon that said if you were over 120 pounds (125 or over they said), to get a medium, but I am pretty steady at 125-130lbs and the small fits just fine. I think that there are more factors than just weight that will determine how this garment fits so I'd suggest going by the Amazon chart.
As for how it looks, it splays out like a French tutu should, right now it sticks up a bit but I'd assume that's from being wrapped inside out the way it was. as it fits now, it doesn't cover a whole lot, rear-wise but that's kind of what you'd expect

I plan to incorporate this into a costume and will update once I have worked with it a bit more. I tried to make this a very detailed review as I know how much I rely on reviews when choosing what I purchase ' Best of luck

Kayla Euker
4.0 颗星，最多 5 颗星 True to Size FIT - Skirt Circumference is Quite Large
2017年4月5日 - 已在美国亚马逊上发表
已确认购买
Tutu is very well supported, and lays just above platter style flat (it may flatten out over time, but the past couple times I've worn it, it's been PAST flat, upward pointing).

I'm 5'9", 125 pounds, and I ordered a small. The small fits great & is typically my true size. A medium would be too large without a doubt.

Honestly, the circumference of the tutu itself is a lot larger than I expected. It's pretty, but could stand to be a TINY bit smaller in my opinion. I can't imagine a tutu this large on a smaller person, I think it would look ridiculous.
阅读更多
1 个人发现此评论有用

Keartine
5.0 颗星，最多 5 颗星 Resilient
2017年9月2日 - 已在美国亚马逊上发表
已确认购买
I am wearing the tutu as part of my clown costume volunteering with the Gesuntheit! Institute in Costa Rica. It is holding its shape very well even with being folded in luggage and bags for the airplane and daily bus rides to different areas around San Jose.
阅读更多

little beek
5.0 颗星，最多 5 颗星 So fun and perfect for her solo audition
2017年5月17日 - 已在美国亚马逊上发表
已确认购买
Love this practice tutu! In fact the studio loved the one I got for my daughter that they purchased about 24 in white. I do think that tacking it makes it look better and steaming helps a bunch. Its sturdy and she will use it for a long time.
阅读更多
1 个人发现此评论有用

GGG
5.0 颗星，最多 5 颗星 Practice tutu looks like professional.
2018年1月4日 - 已在美国亚马逊上发表
已确认购买
Purchased for daughter to have own for rehearsal and pictures . Good quality , looks like professional. Can bring her own to studio. Purchased X small for 17 year old dancer 5’6”, 107 lbs and 24 in waist . May get Small next time for room to grow .
阅读更多
1 个人发现此评论有用
加入亚马逊Prime，从此免运费
亚马逊Prime会员可享海外购美/英/日/德跨境免邮，全年无限次！更有免费无限次阅读电子书服务
> 立即加入
了解我们
合作信息
帮助中心和购物指南