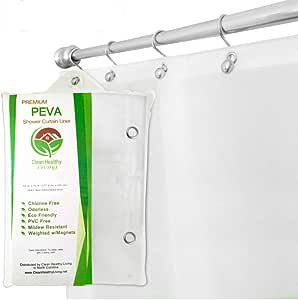 Lady Ann
5.0 颗星，最多 5 颗星 Buy this. NOW.
2015年4月12日 - 已在美国亚马逊上发表
尺寸: 1包已确认购买
I'm a simple girl. I use shower liners as a shower curtain and no one's the wiser (yes, dolphin designs and beach stripes tend to jazz up the bathroom but, really, with my apartment's cruddy old fiberglass tub, how much help would dancing dolphins be?). In the past, I've bought the cheapest shower liner available, then cooled my heels for a week or more while said curtain sat in my backyard, off-gassing like crazy. In short, most shower liners stink.

This one doesn't. As promised, my Premium PEVA Shower Liner arrived promptly, and when I took it out of the package there was NO ODOR WHATSOEVER. It's, like, a miracle. Not only that, the thoughtful people at Clean Healthy Living sent me the sweetest email to be sure I'd received it, and asking absolutely nothing in return. (They didn't even ask me to review their product, I swear on all things holy.)

So even if you don't yet need a shower liner (or curtain), buy this now. The price is reasonable. It's a lovely shade of white. Shipping was fast, the people are nice. It's odorless, non-toxic, and has metal reinforced grommets and magnets (that don't stick to cruddy fiberglass, but it's the thought that counts and maybe the magnets will work for you). I think it even repels mildew but that remains to be seen. And if you don't need one now, you know you'll need a shower liner/curtain some day -- this is the one you want waiting in the wings.
阅读更多
13 个人发现此评论有用

Texas Annie
3.0 颗星，最多 5 颗星 Don't buy this for the suction cups
2018年9月30日 - 已在美国亚马逊上发表
尺寸: 1包已确认购买
Our old shower curtain (which lasted for over 10 years, some kind of record, and is still keeping the rain off our chickens in their run) had suction cups on the side. Really effective suction cups, which kept the sides from flapping all over the place during your shower. We bought this curtain specifically because it had suction cups, which many newer curtains don't. (Magnets on the bottom are all well and good, but they don't secure the *sides* of the curtain.) Anyway, the suction cups on this thing are garbage. It's a nice enough curtain except for that. But don't expect to use the suction cups.
阅读更多
3 个人发现此评论有用

Judith Haga
5.0 颗星，最多 5 颗星 Very nice shower liner
2019年8月22日 - 已在美国亚马逊上发表
尺寸: 1包已确认购买
Received this shower curtain liner yesterday and I am extremely happy with this nice product. The curtain did not smell like most other shower curtains when you open them up.. There was not the expected stuck together type of problem when you open up the package. This liner came out of the package with a pleasant smell and opened up easily plus installed with ease. The magnet and suction on the liner are good for keeping the liner in place and not letting the water leak out onto the floor. Also, the curtain did not have the problem of coming at you when there is a change in temps. and someone opening the bathroom door (like my cat). The liner is a good quality product and you can't beat the price for a product of this quality. I'm glad I took the chance and purchased this liner. I recommend this shower curtain liner very highly.
阅读更多

Mr. and the Mrs.
4.0 颗星，最多 5 颗星 Plastic, not fabric. But, no oder which is a positive.
2019年8月17日 - 已在美国亚马逊上发表
尺寸: 1包已确认购买
I was trying to find a fabric shower liner and thought that this was, for some reason. I've been getting them at Bed Bath and Beyond (fabric liner, washable) but didn't have the time to go drive over there. Anyway, it didn't smell when I took it out of the bag, and I have a sensitive nose to odors. I specifically checked to see if it had suction cups and it does. They don't all work and the ones that do are inconsistent (???). It's heavy enough but not too heavy. Not sure if it will blow in on you when in the shower but I don't know if I'll bother putting it in the washing machine, I'll just get a new fabric one by then (a fabric one that's meant to get wet and be used as a liner which I like better than plastic).
阅读更多

Amazon Customer
2.0 颗星，最多 5 颗星 Buy Some Strong Magnets if you Don't Want the Liner Whirling About
2019年10月5日 - 已在美国亚马逊上发表
尺寸: 1包已确认购买
Update: I assume having super water pressure has something to do with the liner not staying in place (and the cheap suction cups and magnets attached to the liner) So, I purchased some Strong magnets on Amazon that actually hold the liner in place. I shouldn't have had to buy additional items to get the liner to stay in place. I guess that's the quality of most things being made today.
Finally got my shower curtain and liner up. The suction cups are as useless. The weighted magnets are about the size of a penny and have little strength. The curtain whips all around in the shower. Worked up a sweat in the shower, fighting the liner. Horrible experience.
阅读更多
加入亚马逊Prime，从此免运费
亚马逊Prime会员可享海外购美/英/日/德跨境免邮，全年无限次！更有免费无限次阅读电子书服务
> 立即加入
了解我们
合作信息
帮助中心和购物指南