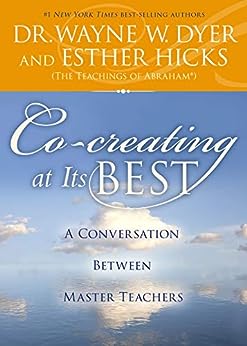 Co-creating at Its Best: A Conversation Between Master Teachers (English Edition) Kindle电子书

英语版本 Wayne W. Dyer (作者), Esther Hicks (作者) 格式: Kindle电子书
|
分享
分享 <分享样章>
广告
显示所有 格式和版本 隐藏其他格式和版本
What happens when you bring together one of the most inspirational spiritual teachers of all time and the Master Sages of the Universe? A magical, insightful, invigorating encounter you will never forget!

In this awe-inspiring book based on a live event in Anaheim, California, Dr. Wayne W. Dyer sits down with Esther Hicks and the wise Collective Consciousness known as Abraham. Wayne asks all the questions he has accumulated from his more than 40 years of teaching others about self-reliance and self-discovery, and Abraham delivers the answers we all need to hear. Topics include:

· Parenting, parents, and the continuum of life
· Can we reach the state of "love that has no opposite"?
· Dharma, destiny, and being on your path
· Dealing with bad news
· Are there ascended masters and guides?
· Monsanto and GMOs
· and many more!

While Wayne and Esther have been friends for years, this is the first time that he engages with Abraham in an extended dialogue about life’s many lessons and perplexing questions. Read this book and experience this extraordinary meeting of the minds for yourself!
阅读更多
Previous page
Next page
›  查看更多商品促销信息

C. J. Dillard
5.0 颗星，最多 5 颗星 Thank you, Wayne. Thank you, Esther. Thank you, Abraham.
2015年3月1日 - 已在美国亚马逊上发表
已确认购买
Abraham, through Esther, speaks about the Law of Attraction. Today, the last day of February, I registered for the April 4 Abraham-Hicks workshop in Atlanta. On February 2 I had some down time and after wandering around the local mall, I discovered a media store that I had never been in. I went straight to the New Age section and among other books, some familiar and some not, I found "Co-Creating" or in retrospect, it found me. I flipped through the pages and was absolutely intrigued by the fact that Wayne, Esther and Abraham had an on-stage conversation. Because it was cheaper to down load "Co-Creating" on my Kindle, I didn't buy the book until the next day, February 3, on my Kindle. On February 4, I was treating myself to a day on the couch with my blanket watching a "On Being Mary Jane" marathon, a TV show about the trials and tribulations of a single, Black working woman. I had never watched "Mary Jane" and didn't know anyone who had until after what happened. During one episode in which Mary Jane was being driven home and she was yet again disappointed in love, her chauffer turned around and shared an Abraham-Hicks message. What??? What is happening to us is for us and preparing us for something greater. I was done . . . in a good way. On February 6 while on FB I received an invitation from Abraham to attend the April 4 workshop here in Atlanta. April 4 will be the two-year anniversary since my brother Paul transitioned into the non-physical world. Today, on the last day of February and after battling with myself about the cost of attending the workshop, I decided that I can't afford not to go. "Co-Creating" found me, has moved me to pay closer attention to the connection between my thoughts and my feelings and I am ready for something greater. Thank you, Wayne. Thank you, Esther. Thank you, Abraham.
阅读更多
3 个人发现此评论有用

patriziainla
5.0 颗星，最多 5 颗星 Can't beat Abraham-Hivcks
2022年1月17日 - 已在美国亚马逊上发表
已确认购买
If you are ready to lean about co-creation and Law of Attraction this is the real deal. Abraham-Hicks is the best teacher currently available. Life changing.
阅读更多
4 个人发现此评论有用

Phyllis Hathaway
5.0 颗星，最多 5 颗星 thank you Abraham and Wayne
2015年1月2日 - 已在美国亚马逊上发表
已确认购买
There is so much in this book. I need to read it several more times to really get it, but the things that seem strong to me are how resistance just makes one feel bad and being aware of our feelings and staying in a place that feels really good (and has no resistance energy to it) is to be desired because it is from that place of alignment that Source can really bring forth what we want or something even better. We spend so much time looking at what we don't want, fighting against one cause or another and it doesn't feel good. What could happen if we want and what makes us feel good? Take a look around you and focus on what's right and good and beautiful. Distract yourself with appreciation for the amazing world we live in. It feels so good and it opens you up to more of your good to flow to you. Thank you Wayne and Abraham for this wonderful conversation.
阅读更多
2 个人发现此评论有用

PS David
5.0 颗星，最多 5 颗星 A Perfect Pairing
2014年12月3日 - 已在美国亚马逊上发表
已确认购买
Two of my favorite teachers come together in a question-and-answer format. I've followed Abraham for years and I can never get enough of hearing their explanation of the questions of life. My journey in discovering the law of attraction took many years and I've studied many prospectives and I've found Abraham's to be clear and consistent. I've long stopped concerning myself with where the message is coming from and learned to tune into the message and every aspect of my life has improved as a result.

I recommend this book for anyone searching for the truth behind the LOA "movement". I've found most of the other material has been so scrubbed for mainstream consumption that it is virtually meaningless. I'm a skeptic but I know there's more to life than what we see--we all do--and the search for answers comes naturally to any intelligent person.

For me, I enjoyed hearing Abraham's message given as answers to Dr. Dyer's very thoughtful questions. A very good read, I wish it were longer!